First-Of-Its-Kind Exhibition on Hinduism in US Capitol Hill.

Greatness of Hindu Civilization Exhibited at  Capitol Hill in US.

Many US Lawmakers attend First-Of-Its-Kind Exhibition on Hinduism.

Sohini Singh | HENB | Washington | May 12, 2022:: Two influential American Senators and seven Congressmen attended a first-of-its-kind exhibition on various facets of Hinduism at the US Capitol this week. Representatives from thirty-two Congressional offices also visited the Exhibition.

The exhibition offered a platform to explore a wide range of topics such as yoga, ayurveda, dharma, mathematics, architecture, arts, sciences, philosophy  and the present-day global presence of Hinduism.

The “Darshana – A Glimpse into the Hindu Civilisation” exhibition was held at the US Capitol on May 10 and May 11 as part of a year-long nationwide Hindu Dharma Awareness Campaign, a media release said.

“I appreciate it (Hindu culture) because it’s an enterprising culture. So much of what we do in this world has its roots there, and the more I see, the more I learn about it; it’s probably part of how we solve today’s problems from climate change to food security,” said Senator Mike Braun.

In general, it is an industrious, enterprising and faithful community, he said.

“Glad I’ve had time to learn more about it,” Braun said after visiting the exhibition wherein he had a glimpse of the various aspects of Hinduism, organised by Hindu Swayamsevak Sangh USA (HSS) in conjunction with numerous Hindu organisations.

Senator Mark Kelley also toured the exhibition and engaged with the organisers to learn more about the Hindu community and its traditions, culture and philosophy.

Representatives from 32 Congressional offices visited the exhibition to learn more about the Hindu traditions and culture.

“We are glad that so many lawmakers and their staff took the time out of their busy day to view the exhibition and learn more about Hindu traditions and culture,” said Darshan Soni one of the organisers of the Capitol Hill event.

This exhibition is part of the Hindu Dharma Awareness Campaign and it is successfully being presented and welcomed across the country.

In April and May, there are over 200 events being organised across the country to educate the political, civic, educational, and interfaith leaders about the Hindu religion.

Open to all, it provides glimpses into the Hindu way of life. 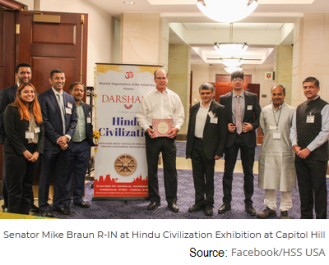 This Exhibition is part of the Hindu Dharma Awareness Campaign and is successfully being displayed and welcomed across the country.  In the months of April and May, over 200 events have been organized across the country to educate political, civic, educational, and interfaith leaders about Hindu Dharma, another term for Hinduism.  Open to all, it provides glimpses into the Hindu way of life.

“This was a collective effort of several Hindu organizations.  This event created a great opportunity for elected representatives and their staff to better understand their Hindu constituents,” said Darshan Soni, National Joint Executive Director of HSS USA and one of the key organizers of “Darshana – A Glimpse into the Hindu Civilization” at the Capitol Hill event.

___With Inputs from PTI and HSS.

One comment on “First-Of-Its-Kind Exhibition on Hinduism in US Capitol Hill.”