‘Anti-national forces behind the attack on VD Savarkar’s image’ 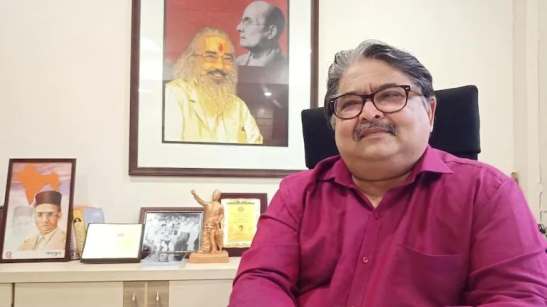 The attack against the Hindutva ideologue Savarkar was initiated by anti-national forces, says grandson Ranjit.

Amid the ongoing row over Vinayak Damodar Savarkar, his grandson Ranjit said the anti-national forces behind attack on Savarkar’s image.

“The attack on Savarkar’s image is purely for political purposes. What has happened in Shivamogga is very disturbing. A verbal attack has turned into physical assault and this is expanding. I condemn it and I believe the attack has been initiated by anti-national forces because Savarakar’s ideology is most relevant in today’s time,” Ranjit Savarkar said.

Recently, senior Congress leader Siddaramaiah sparked a controversy after he questioned putting up of Savarkar’s photo in Muslim areas. The question evoked sharp reactions from the ruling BJP.

Talking about the recent row, Ranjit Savarkar said, “Savarkar opposed Pakistan, Jihadi forces, but he never opposed Muslim. Savarkar was never anti-Muslim. His only advice was to keep your religion at home, don’t force conversion, and respect others. What is wrong in that? This message of Savarkar goes to Indian Muslims, who I believe are patriotic. This message is not for Jihadi Muslims, who will always oppose Savarkar.”

When asked what Savarkar would think about politics being done in his name, Ranjit Savarkar said, “Veer Savarkar wrote Hindutva in 1923. He foresaw the Muslim League becoming separatist and demanding a separate nation based on religion. The conversion movement was going on strongly (at that time). So Savarkar’s view was that everyone has a right to exercise their religion, but it should be confined to their personal lives. “

“As far as Savarkar’s Hindutva is concerned, it was nationalist. He never even believed in God or ritualistic religion,” Ranjit Savarkar said.

He also dismissed Congress’s claim that Savarkar proposed the two-nation theory. “This is ridiculous. The theory was proposed before the birth of Savarkar,” Ranjit Savarkar told India Today.