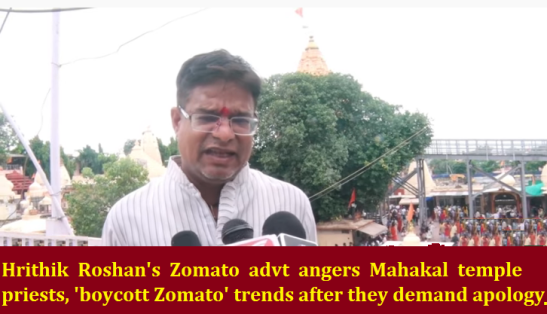 In the ad, Roshan says he felt like having a ‘thali’ (food platter) in Ujjain so he ordered from ‘Mahakal’.

In the ad, Roshan says he felt like having a “thali” (food platter) in Ujjain so he ordered from “Mahakal”.

The Mahakaleshwar or Mahakal temple of Shiva in Ujjain is one of twelve `Jyotirlingas’ which attracts devotees from across the country.

Priests of the temple Mahesh and Ashish said Zomato should withdraw the advertisement immediately and tender an apology.

Devotees are served ‘mahaprasad’ on a thali ‘free of cost’ and the ad hurts the feelings of Hindus, they claimed.

They also approached Ujjain district collector Ashish Singh who is the chairman of the Mahakal temple trust and sought action against the company so that no one mocks the Hindu religion again, the priests said.

Speaking to reporters, Singh termed the ad as “misleading”, saying that the temple offers free meals as `prasad’ and it is not sold.

The Hindu Janajagruti Samiti has also protested the matter and tweeted, #Zomato_Insults_Mahakal In an ad, @iHrithik says “Thaali khane ka man tha, Mahakal se mangaa liya” Mahakal is no servant who delivers food to those who demand it, He is a God who’s worshipped. Could @zomato insult a God of another religion with the same courage? #Boycott_Zomato .

As earlier, in many cases Zomato hurt the Hindu sentiment in many ways. Now, there is call in the social media to Boycott Zomato to teach them a lesson.

Update (21.08.2022): Facing the protest from all quarters in the present row of vilification of Mahakal Temple by Zomato ad featuring Hritik Roshan,  the errant Indian multinational restaurant aggregator and food delivery company ultimately withdrew the disputed video advertisement. Zomato Care tweeted, “We deeply respect the sentiments of the people of Ujjain, and the ad in question is no longer running. We offer our sincerest apologies, for the intent here was never to hurt anyone’s beliefs and sentiments. (5/n)”

As such the Zomato admitted their defeat through a series of tweets facing the huge protest from Sanatan Sanstha, Hindu Janajagruti Samiti, Hindu Eco System and thousands of individual Hindu protesters.

Let us see how and when Zomato dares again to hurt the Hindu sentiment next. In the meanwhile Hindu Existence Forum ran a discrete campaign to teach a lesson to the habitual offender for which they have to face the wrath of Mahakal in this month. A good numbers of Hindutva devotees are not ready to just compromise with a cryptic apology of Zomato in the twitter.

Read another Nuisance of Zomato: Delivery of beef stew instead of chicken in Kolkata. Hindus ready to boycott Zomato in fury.