See what Christian Missionary Schools and Hostels are doing….

Revathi Chandran | HENB | Chennai | Sept 10, 2022:: A Christian conversion mafia was exposed after the State Commission of Protection of Child’s rights (SCPCR) paid a surprise visit to CSI (Church of South India) Girls Hostel. Hindu Girls mainly from from poor tribal families were allegedly forced, harassed and converted in this hostel. Victims have given a written statement to the panel about the torture that was meted out to them. The hostel warden allegedly abused them, held captive and forced them into Christianity. The hostel is still abusing them and forcing them to change the statement.

In the latest development, National Commission for Protection of Child Rights (NCPCR) Chairperson Priyank Kanoongo has written to the Tamil Nadu government requesting to initiate necessary action and inquiry against CSI Monahan School Girls Hostel in Royapettah of Chennai. The commission has levelled forced conversion charges against the school run by the Church of South India (CSI) in Chennai. The hostel is reportedly not registered with the government and lacks safe infrastructure.

NCPCR Chairman Priyank Kanoongo in his letter has asked the Chief Secretary of Tamil Nadu V Irai Anbu to evacuate inmates of a Christina school hostel within 24 hours. The letter by the NCPCR chairman comes after the Chairman of the State Commission for Protection of Child Rights (SCPCR) and other members of the commission paid a surprise visit to check hostels attached to CSI Monahan Girls Higher Secondary School on September 6.

The report was submitted on Friday, September 9 after a team headed by SCPCR Chairperson Saraswati Rangasamy and other members inspected hostels at the CSI Monahan School Girls Hostel in Royapettah of Chennai.

The team visited the hostel under the parameters fixed by NCPRC and found various faults of the hostel authority including the alleged ‘forced conversion’, ‘unhygienic condition of sanitation’ and ‘not providing nutritious foods’ to the girls, another source reported.

The report said that Child Care Institution (CCI) was found to be unregistered and was lodging girls from poor family backgrounds who were then forced to follow Christianity. The team also met the girls residing in the hostel who were seeking immediate help from them for their rescue.

The team had shared its contact details and an official from the District Child Protection Office (DCPO) immediately instructed the Child Welfare Committee (CWC) and DCPO to rescue the girls from the hostel on the same day.

However, according to the report, some girls from the said CCI called the Tamil Nadu State Commission for Protection of Child Rights (TNSCPCR) on September 9 to inform them that they have not yet been rescued from the CCI and are being abused by the hostel warden now.

Meanwhile, TNSCPCR has further informed that the state authorities are not responding to their calls and they have come to know through a staff member that the officials of the Social Defence Department are supporting the CSI School Management while preventing the rescue operations from taking place.

Taking cognizance of the matter, NCPCR has directed the officials to lodge an FIR and initiate proceedings against the school and the people associated with it. Following inaction on the Social Justice Department’s part, NCPCR said that the people associated are to be booked under section 42 of the Juvenile Justice Act, 2015, for housing the girls in an unregistered Child Care Institution. 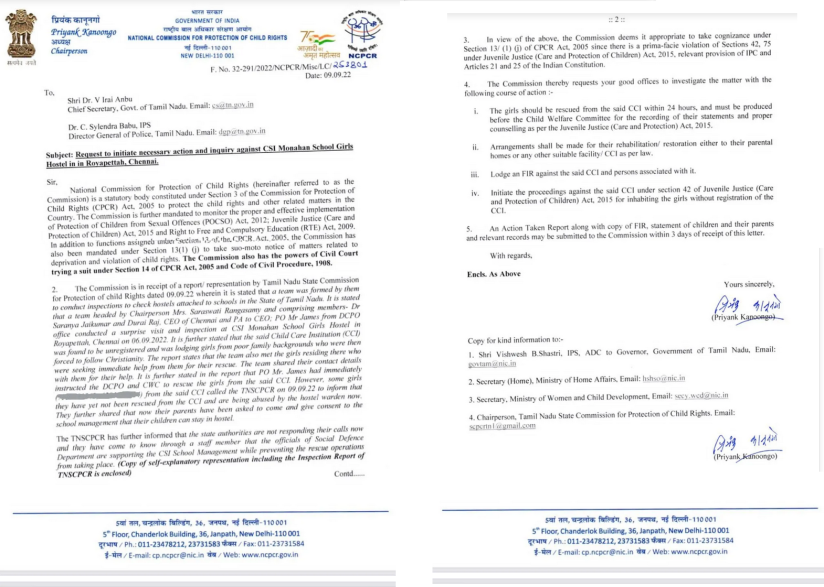 Further, NCPCR has also instructed the authorities to make a submission consisting of the FIR copy, statements of the children and their parents with other relevant records within three days.