In Bangladesh one after another Hindu girls are kidnapped, raped and killed.

Bangladesh: One after another Hindu girls are being subjected to abduction, rape, prostitution and murder. 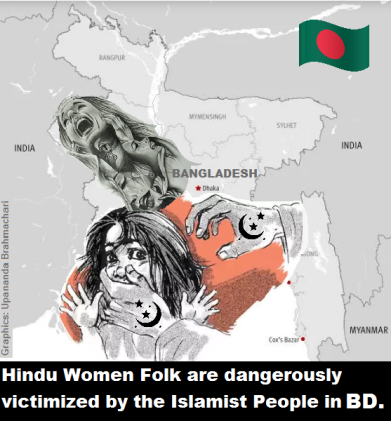 Upama Das | HENB | Dhaka | Oct 1, 2022:: In Bangladesh, one after another, Hindu girls were kidnapped, raped, forced into prostitution after marriage and killed. According to media reports, an 11-year-old girl from Sultanpur village of Nabiganj upazila (sub-district) of Bangladesh has been  gang-raped by Muslim miscreants. On September 27, the dead body of the girl named Popi Sarkar was recovered from the nearby field of her house. Later postmortem revealed that she was gang-raped and murdered. Digindra Sarkar, the father of the deceased girl, filed a complaint against Surman Ali, a resident of the same village and other two at the Nabiganj police station. Surman Ali was arrested based on the complaint, said Office in Charge of Nabiganj Police Station, Harun Ol Rashid. However, the police could not find the remaining two accused.

In another incident, an auto rickshaw driver named Mohammad Ashkar Ali has been accused of abducting an eighth grade Hindu girl student (14) of East Naingaon village in Doarabazar upazila of Sunamganj, Sylhet, Bangladesh in front of her parents. the accused Ashkar Ali entered the house at around 11 o’clock on the night of September 21 and took the girl form her parents. After that, anybody did not disclose the matter for two days out of fear; but on September 23, the girl’s father filed a case of abduction against Ashkar Ali and others at the Doarabazar police station. The girl is an eighth grade student of Mohibur Rahman Manik High School. His father is an agricultural laborer by profession. Allegedly, Ashkar Ali often teased the girl on the way to school. He was proposing love to the girl. But as the girl did not respond to that proposal. At night of the incident, Ashkar barged into the girl’s house along with some miscreants. Police is still failed to recover the girl and no reports of arrest so far in the case.

In addition to these two incidents, a young Hindu girl from Bangladesh has become a victim of love jihad. It is known that a young girl named Priti  was trapped in the net of love by a young man named Mohammed Fahad, a resident of the same area. The girl was so madly in love with Fahad that she married him despite the repeated warnings from her parents. A daughter was also born to them. But since then Fahad allegedly forced his wife Priti into prostitution with many Muslim friends. When Priti protested, she was killed by her husband. Taking his twitter handle, ISKCON Vice President and Spokesperson Radharamn Das mentioned this incident by sharing pictures of Priti with her husband and the baby.

Police action on Priti’s murder is not available so far, as Bangladesh police only maintain some formalities in case of abduction, rape, murder etc. of Hindu girls and women as the minority Hindu people in Bangladesh have been being persecuted since partition of India.

2 comments on “In Bangladesh one after another Hindu girls are kidnapped, raped and killed.”