‘Stop these anti-Hindu and anti-India bias and false narrative’: Hindus at Protest in London BBC HQ. 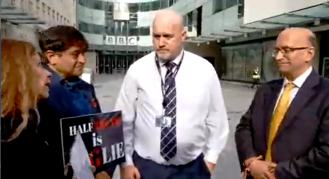 Arghya Mitra | HENB | London | Oct 30, 2022:: Strong protest held by Indian diaspora in London against  Anti-India and Anti-Hindu bias as reflected in BBC’s reporting for a long time as one sided narrative favoring Muslims.

Members of many Hindu groups protested outside BBC HQs in London against Hinduphobhia in their reportage since years.

The silent protest programme  against against ‘BBC generated Hinduphobia’ held on Oct 29, 2022, Saturday between 11 AM – 2 PM. This was big Hindu protest after Rishi Sunak assumed his office in 10 Downing Street as UK Prime Minister.

A good presence of the Hindus in Indian diaspora in the protest before BBC HQ in London marked the same as strong though peaceful.

In the memorandum given to BBC on behalf of Insight UK it is told:

“We, INSIGHT UK, are writing regarding the recent events in Leicester and Birmingham, where the Hindu community has been the target of organised violence.  The Hindu and Indian community feels let down by major broadcasting houses, including the BBC, whose reporting on these incidents has come across as anti-Hindu in its sentiment. We consider that it has only served to further incite hatred and propagate further divisions between communities who have otherwise been living relatively peacefully side-by-side in these cities.

The misinformation that has circulated on social media sites regarding these attacks has portrayed the Hindu community as perpetrators of this violence.  Much of it has been instigated by the actual offenders, Islamists who wish to destabilise the peaceful co-existence of diverse religions, and worse still, increase the incidence of Hinduphobia in our communities.

As a community, Hindus make up much of the British Indian diaspora (1.5 million British Indians in the UK) and have always been one of the most peaceful and law-abiding groups of citizens in the UK.  British Indians make up less than 0.5% of the total prison population (185 out of 78,324 inmates) in the UK, reflecting the highest values we as a community strive to live by. British Hindus and Indians also continue to be one of the most economically successful minority groups, with 654 Indian diaspora-owned companies collectively investing around £2bn in the UK economy through capital expenditure. British Hindus have integrated into UK society, quietly and humbly contributing to Britain in various fields, yet as a community we continue to be targeted and belittled.

We question why it is that with regards to the recent violence in Leicester and Birmingham and historically in relation to other Hindu issues, the BBC’s reports about the Hindu community are negative, biassed and containing mistruths.

In recent weeks, it seems that evidence-based reporting is something that the BBC has discarded, only to peddle misinformation.

In this climate, we wish to remind the BBC of the law-abiding nature of the Hindu community and the absence of ‘Hindu terror organisations’ or ‘Hindu terror attacks’ anywhere around the world, let alone on UK soil. We call for the BBC to cease its false reporting. Anti-Hindu sentiments are on the rise; as a public broadcaster, the BBC should have no role in fanning these flames.

We also wish to remind the BBC that:

We accordingly ask the BBC to apologise for the distress caused to the British Hindu community  through its reporting and remove all misinformation and unevidenced claims from its broadcast and print content. At a time at which there is a real threat to the security of Hindus in the UK, with the risk of further creating disharmony in our society, it is imperative that the BBC reports with integrity and responsibility to all citizens.”

The organizers also conveyed the BBC authority for their readiness for open dialogue and for having a face-to-face meeting to further discuss this matter related to the escalating Hinduphobia at the behest of BBC perpetration.

One of the leaders of the protest told the BBC’s Mr. Frans Van Der Merwe, “The reports BBC are creating hatred for us in this country and our people are not safe now in this country…..  Now, we think enough is enough. And this is just the first time we are coming, but we will be coming for many many more times till we get these sorted out for this is now getting very serious.”

Earlier, the Insight UK wrote to then UK PM Liz Truss on Oct 14, 2022 through an open letter as Failing Liberty:  Tolerating Intolerance is Breaking Britain.