Meerut: 9 booked for over 400 forced conversions to Christianity from Hindus. 3 arrested. 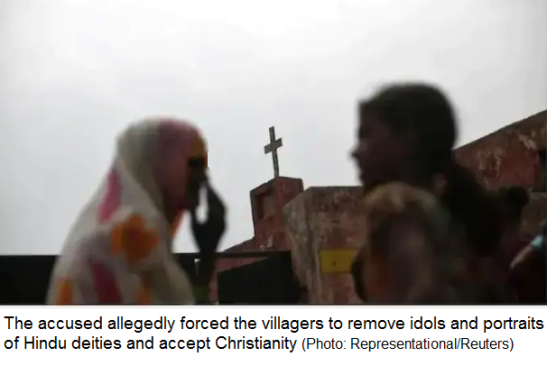 9 booked for over 400 forced religious conversions in UP’s Meerut.

A case has been filed against nine people for forcing over 400 religious conversions in UP’s Meerut. The accused allegedly forced the villagers to remove idols and portraits of Hindu deities and accept Christianity. The conversionists came in contact with the victims during the Covid-19 induced pandemic.

Usman Chaudhary | India Today Online | Meerut | Oct 29, 2022:: As many as nine people have been booked in Uttar Pradesh’s Meerut for allegedly forcing 400 people to convert to Christianity. The victims approached the Senior Superintendent of Police (SSP) and complained that they were lured to convert to Christianity. The incident happened in Malin village in Mangat Puram.

In the police complaint, the victim alleged that they were coerced to do away with the idols and deities of Hindu gods and goddesses. As per the FIR, the accused, who forced people to convert into other religions illegally, came in contact with the victims during the Covid-19 induced pandemic.

On Friday, the victims reached Brahmaputri police station with a BJP leader and said that the accused lured them with money and food for religious conversion. Now, these people are forcing the villagers to remove idols, statues and portraits of Hindu deities and accept Christianity, they said.

The complainants told the police, “We were pressurised to religious conversion and were asked to change our names on our Aadhaar Cards. When we were worshipping on the day of Diwali, the accused barged into our houses and vandalised the idols of deities. They said when you have converted your religion, then why are you doing this? When we protested against this, they threatened us to death”.

SP Piyush Singh said, “On Friday, some people reached our office and gave an application. It is alleged that people of other religions want to forcibly convert the religions of the people of Malin village. Instructions have been given to take action by registering an FIR against the accused. The matter will be investigated and appropriate action will be taken”.

As per latest update, the Meerut police have conveyed through its twitter handle that 3 persons have been arrested in this case and search is on to nab the other persons named in the related FIR.