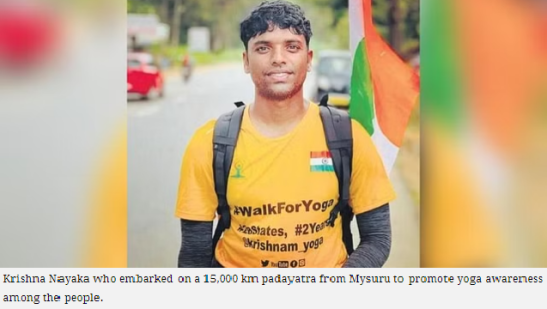 Mysuru Hindu man on a 15,000 km padayatra to promote yoga.

During his padayatra, Krishna Nayaka visits educational institutions and educates students on the benefits of yoga.

Sri Krishna Kummara | Express News Service | Tirupati | Jan 5, 2023:: Krishna Nayaka who embarked on a 15,000 km padayatra from Mysuru to promote yoga awareness among the people, entered the temple town of Tirupati on Wednesday after covering Karnataka, Kerala and Tamil Nadu. He has so far covered 2,000 km as part of his walkathon and he wants to complete his mission in two years. The 29-year-old man walks 30 km a day, educating people on the benefits of yoga.

He was introduced to yoga by a sage, who came from the Himalayas for the treatment of his fractured collar bone at an ayurveda hospital in Mysuru way back in 2008. Later, he attended classes and practised yoga for years to get his back pain due to back Lumbar Spondylosis cured.

He was a member of the Mysore University cricket team and playing too much cricket led to back pain during his student life. Influenced by the healing benefits of yoga, he wanted to promote it in a big way and embarked on 15,000 km from Mysuru in October 2022.

“When I consulted doctors for my back pain, all of them suggested that I undergo surgery. As I was not willing to undergo surgery, I visited the ayurveda hospital where I met the sage. He told me that there is no better treatment for back pain than doing yoga regularly,” Krishna said.

He said, “A layman thinks yoga is nothing but twisting your body. Even I had the same perception until I started practising yoga. Once we start doing yoga, we will know its benefits and yoga and yoga asanas are different. Yoga also helps an individual attain a good physique, besides controlling emotions and subduing stress.”

After learning yoga asanas, Krishna set up Krishnam Yoga institute to teach yoga. Now, more than 30 people of all age groups are learning yoga in his institute. During his padayatra, Krishna visits educational institutions and educates students on the benefits of yoga. He wants to conclude his padayatra in Musuru after covering all the States in the country.

One comment on “To promote Yoga, a Hindu youth undertakes 15,000 km solo walkathon.”