Christian-Missionary Raj in India through Sonia (Maino) Gandhi. The story of Indian Crusaders. 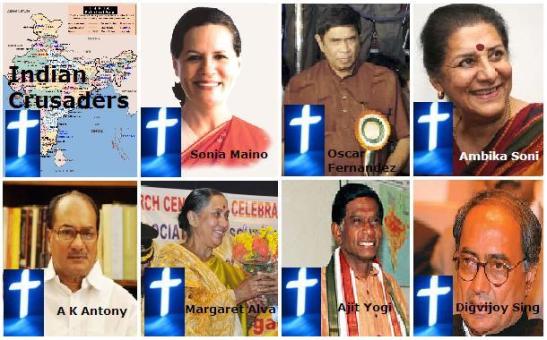 Are we heading towards a Christian India?

I am a westerner and a born Christian. I was mainly brought up in catholic schools, my uncle, Father Guy Gautier, a gem of a man, was the parish head of the beautiful Saint Jean de Montmartre church in Paris ; my father, Jacques Gautier, a famous artist in France, and a truly good person if there ever was one, was a fervent catholic all his life, went to church nearly every day and lived by his Christian values. There are certain concepts in Christianity I am proud of : charity for others, the equality of system in many western countries, Christ’s message of love and compassion….
Yet, I am a little uneasy when I see how much Christianity is taking over India under the reign of Sonia Gandhi (actual name : Edvige Antonia Albina Maino ) : according to a 2001 census, there are about 2.34 million Christians in India ; not even 2,5% of the nation, a negligible amount.

Yet there are today five Christian chief ministers in Nagaland, Mizoram, Meghalaya, Kerala and Andhra Pradesh.(in2008).

One should add that the majority of politicians in Sonia Gandhi’s closed circle are either Christians or Muslims. She seems to have no confidence in Hindus. Ambika Soni, a Christian, is General Secretary of the Congress and a very powerful person, with close access to Sonia Gandhi. Oscar Fernandez is Union Programme Implementation Minister. Margaret Alva is the eminence grilse of Maharashtra. Karnataka is virtually controlled by A K Anthony, whose secretaries are all from the Southern Christian association. Valson Thampu, a Hindu hater, is Chairman NCERT curriculum Review Committee, John Dayal, another known Hindu baiter, has been named by Sonia Gandhi in the National Integration Council ; and Kancha Ilaya, who hates Hindus, is being allowed by the Indian Government to lobby with the UN and US Congress so that caste discrimination in India is taken-up by these bodies. ( One can also add to list Ajit jogi, and Digvijay Singh both christian converts & also Pranoy Roy, his niece Arundhati ‘suzanna’ roy )

I have nothing personally against Sonia Gandhi, in fact she probably is a good person to win the allegiance of so many and certainly a loving mother. I share with her a love for India, like her I have lived in this country for over 30 years and like her I have married an Indian. But nevertheless, since she is at the top, Christian conversions in India seem to have gone in overdrive. More than 4,000 foreign Christian missionaries are involved in conversion activities across different states. In Tripura, there were no Christians at independence; there are 120.000 today, a 90% increase since 1991. The figures are even more striking in Arunachal Pradesh, where there were only 1710 Christians in 1961, but 1,2 million today, as well as 780 churches! In Andhra Pradesh, churches are coming-up every day in far flung villages and there was even an attempt to set-up one near Tirupati. Many of the North-East separatist movements, such as the Mizo or the Bodos, are not only Christian dominated, but also sometimes function with the covert backing of the missionaries. In Kerala, particularly in the poor coastal districts, you find “miracle boxes” put in local churches: the gullible villager writes out a paper mentioning his wish: a fishing boat, a loan for a pukka house, fees for the son’s schooling… And lo, a few weeks later, the miracle happens! And of course the whole family converts, making others in the village follow suit. During the Tsunami, entire dalit villages in Tamil Nadu were converted to Christianity with the lure of money.

It is true that there have been a few backlashes against missionaries and nuns, particularly the gruesome murder of Graham Steins and his two sons. But Belgium historian Koenraad Elst laments that « When over a thousand Hindus are killed and a quarter million Hindus ethnically cleansed in Kashmir, the world media doesn’t even notice, but watch the worldwide hue and cry when a few local riots take place and a few missionaries are killed by unidentified tribal miscreants. Christian Naga terrorists have been killing non-Christians for decades on end, and this has never been an issue with the world media, except to bewail the “oppression” of the Nagas by “Hindu India” ». More than 20,000 people have lost their lives to insurgency in Assam and Manipur in the past two decades. As recently as last week, four paramilitary Assam Rifles soldiers were killed in an ambush yesterday by the outlawed United National Liberation Front (UNLF).

The other day I was at the Madras Medical center, the foremost heart hospital in Madras. Right when you enter the lobby, you find a chapel, inviting everybody to pray, there are pictures and quotations of Christ everywhere and a priest visits all the patients, without being invited at all. Educational institutes and orphanages run by Christian organizations have become big business in Karnataka, Andhra Pradesh and other states. In Pondichery, where I am often, schools run by Adventists force their pupils, mostly Hindus, to say Christian prayers every day and attend mass. They are constantly fed anti Hindu slogans and biases under different forms, whether it is in history books, or discourses by priests during religious classes. Even in the elite schools or colleges, such as Saint Stephen in Delhi, Saint Xavier in Calcutta or Loyola college in Madras, where no direct proletization is attempted, Hindu pupils are subtly encouraged towards skepticism of their own religion, and admiration of whatever is Western. One should also say that it’s a one way traffic : remember the furor when MM Joshi wanted the Saraswati hymn to be sung at a Chief Ministers’ meet on education ? And imagine the uproar in secular India if portions of the Bhagavad Gita, this Bible for all humanity, were read at the beginning of the day in public schools ?

Sonia Gandhi said during the last National Integration Council meeting : « We are committed to ideological battle against communal forces which seek to destroy our diversity and polarise us. Certain parties promote polarization and confrontation. And there are certain regimes in India which promote communalism ». But is not actually the Congress under Mrs Gandhi, which is promoting communalism, by insidiously installing Christians and Muslims (and Marxists) everywhere, propping up Christian states, allowing a free hand too missionaries and pressing for reservations for Christian Dalits and Muslims, as recently done in AP, in a nation of 850 million Hindus ?

In my country, France, a Christian majority nation , it would be unthinkable to have Hindus – or even Indian born French for that matter – in so many positions of power. Impossible also to find a non-elected, non French, non-Christian person being the absolute ruler of the country behind the scene as Sonia Gandhi is in India. Indians like to say that the greatness of India is that it accepts a foreigner and a Christian like Sonia Gandhi. But is’nt it rather a weakness, and an aberration ? Can’t we find a worthy leader amongst one billion Indians ? This is an India where you see today Swami Avimukteshwarananda Saraswati of Dwarka Peeth, made to disembark from an Indian Airlines flight for carrying his holy dand, a thin bamboo stick which is a symbol of their spiritual designation, inside the aircraft cabin.

Are we heading then towards a Christian India under Sonia Gandhi’s helm? It would be a tremendous loss not only to India, but also to the world. For in India, you find the only living spirituality left on this planet.

François Gautier. (the spirit and the force of the article remains vital in present context).

In case you missed…

35 comments on “Christian-Missionary Raj in India through Sonia (Maino) Gandhi. The story of Indian Crusaders.”