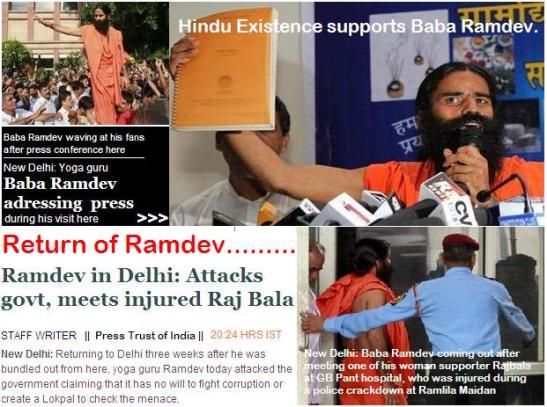 NEW DELHI| IANS | Jun 26, 2011, 03.51pm IST|: Weeks after he was forced to quit Delhi, Baba Ramdev returned here on Sunday to meet a woman who remains in hospital since suffering spinal injuries in a police crackdown on the yoga guru on June 5.

Ramdev met Raj Bala, 51, a resident of nearby Gurgaon, at the GB Pant Hospital. He is to address the press later in the day.

Delhi Police said there were no restrictions on Ramdev’s movements.

“Why would we stop him?” asked Deputy Commissioner of Police Dharmendra Kumar. “He is allowed to hold a press conference.”

Delhi Police broke up his fast against corruption at the Ramlila ground here after June 4 midnight, dispersing thousands of men and women using force and tear gas. Many suffered injuries. Raj Bala was one of them.

Ramdev reached the hospital this afternoon and met Rajbala in the Intensive Care Unit. He left the hospital around 3 pm.

A large number of his supporters had gathered outside the hospital but were prevented by police from entering the Unit. Speaking to the media, Baba Ramdev accused the government of trying to silence people who are fighting corruption. He said, ” Rajbala’s condition is due to police violence. My fight was not illegal and nobody can silence me.”

Police were deployed in abundance outside the hospital to ensure that no untoward incident takes place. Senior officials were at the hospital leading the police contingent.

Sources said police was keeping a close watch on the movement of the yoga guru.

Delhi Police has in an FIR on the Ramlila Maidan incident, cited “provocative” speeches made by religious and political leaders, including Baba Ramdev and Sadhvi Ritambara, as the main reason for canceling permission for the yoga guru’s protest at Ramlila Maidan.

He was asked to leave Delhi and banned from entering the city for 15 days. Ramdev continued his fast in Haridwar and Dehradun till June 12.