Coming Islamic regimen will stop Ram Janmabhoomi Temple and start forceful cow slaughter in Uttar Pradesh. Hindus will be put in a peril.

The Win of Mullah Mulayam Singh Yadav and the Fate of UP Hindus.

As the majority Hindus in India have no Political Party to whip, rather no political strategy or intention to live in India as Hindu in a Hindu majority state with a political gain, the jugglers in the BJP (Bhartiya Janata Party) presented a very poor show in Uttar Pradesh Assembly Election in 2012 without any urge to go ahead.

Once captured the heart land of India called as Cow-belt with strong Hindu sentiments tagged with Sri Ram Janmabhoomi Movement, from a period of 1991-96, the pseudo Hindu leaders in BJP could not protect their boats this time anywhere in the streams of Ganga, Jamuna or Sarayu. As a matter of fact the deities of Ram Lala in Ram Janmabhoomi Temple in Ayodhya,  Lord Viswanath of Varanashi and Lord Krshna in the Mathura Krshna Janmabhoomi Temple cursed this party for their sin to betray with the Hindus time and again. Both the BJP and its mentor RSS (Rashtriya Swamsevak Sangha) have no intention to make a ‘Hindu Vote Bank’ for the survival of Hindus in India. These organizations are only to run their organization of their organizational sake, not for the fortified future of the Hindus.

BJP has been ousted in Uttar Pradesh, the Hindu heart-land of India.

As a result, the Uttar Pradesh is now ensured as a place of certain Muslim gain with no Ram Janmabhoomi Temple at all. Around 20% Muslim voters (17% as per Govt. stat.) have successfully set a fire brand of 69 Muslim MLAs (largest MLA strength in any Indian State and highest ever in UP) to slap in the faces of 47 BJP MLAs, as and when required in the floor of UP Assembly and to oppose Ram Janmabhoomi Temple in Ayodhya.  But the VHP (Vishwa Hindu Parishad), BJP, RSS and the Bajrangdal will beat their drums in the deaf ears of reluctant Hindus for their organizational interest and monetary gain. Simply, the Hindus will be put in a peril.

The majority Hindus even do not know that the upsurge of two Muslim political parties namely Peace Party (4 MLAs) and Qaumi Ekta Dal (2 MLAs) in the UP assembly is unprecedented one as there was no reality of any Muslim party in political scenario in Uttar Pradesh so far with an thin existence of Dr Faridi’s ‘Muslim Majlis’ in the late sixties.

In reality, the election equations of  Azam Khan and Mullah Mulayam Yadav or Peace Party or Qaumi Ekta Dal and Samajwadi Party (SP) were frantically squared up by both the Aligarh and Deoband contingents to quash out the Court verdict in favour of Ram Janmabhoomii Temple at Ayodhya.

SIMI-SIO have the largest base in Uttar Pradesh to dictate the Muslim Voters and to influence the political parties.

Congratulating Mulayam Singh Yadav and Muslim Candidates, Maulana Mufti Abul Qasim Nomani of Darul Uloom Deoband said that now when the people of Uttar Pradesh have given a clear mandate to Mulayam and his team he should learn from his previous mistakes and fulfill his promises made in the manifestoe. Maulana said that Muslims have played a very important role in the victory of Mulayam so he should give proper attention to their demands.

Rahat Abrar PRO of Aligarh Muslim University said that this was for the first time when the majority of Muslims gave their support to Mulayam. Now it is the duty of Mulayam Singh to do what he promised for the Muslims before the election.

From reliable source, it has been ascertained that the so called  non-political Muslim organisations and their student wings had played a vital role in this election in UP to promote a Muslim force in the state to ensure the Islamic supremacy in the region to enact a law of Allah. The banned student organization SIMI (Student Islamic Movement in India) and SIO (Student    Islamic Organization) – the Student wing of Jamat-e-Islami-Hind had deployed 2000 ansars (dedicated cadres) in the fray to help the SP and Islamic tie up. From 1977 the SIMI and SIO have been trying hard to change the entity of Hindu Uttar Pradesh to an Islamic hold in various names like Rohilstan, Mughalstan, New Pak Land or anything they like to think better.

The entire anti Hindu force now fully relish the UP verdict in favour Mulayam Yadav’s Samajwadi Party, who will never allow a Ramjanmabhoomi Temple in Ayodhya.  This Mulayam Singh Yadav ordered firing against the Karsevaks in Karsevapuram and in the streets of Ayodhya and the banks of Sarayu in the year 1990 when more than 100 Karsevaks killed, heavily injured and unfound permanently. 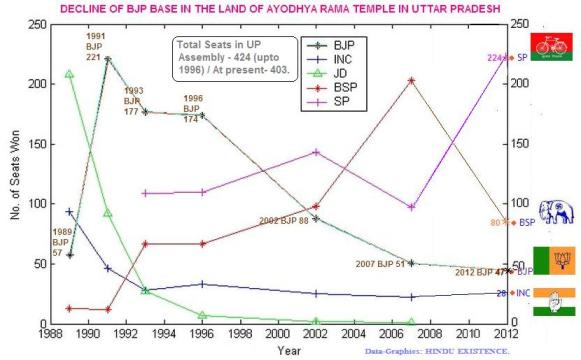 DECLINE OF BJP BASE IN THE LAND OF AYODHYA RAM TEMPLE. THE RISE OF ISLAMIC INSURGENCY IN UTTAR PRADESH. REALITY OF MUGHALSTAN?

It is not a matter whether Mulayam or his son Akhilesh will be sworn in the UP Assembly House as next Chief Minister, but they have assured the Muslim regimen in UP without any hurdle any more.

In a letter to Shahi Imam of Delhi’s Jama Masjid Delhi, Syed Ahmed Bukhari, just after setting  his election strategy and campaign, Mullah Mulaym Yadav promised setting up a commission to “survey the backwardness of Muslims” in Uttar Pradesh and give “exemplary reservation” to the community if his party formed the next government in the state.

Bukhari, in his letter, said that there was discontentment amongst Muslims against SP in the last Lok Sabha elections, and that the party will have to take some strong steps in order to win back the support of Muslims.

The main suggestions in Bukhari’s letter were implementation of the recommendations of the Rangnath Mishra Commission and Sachar Committee, declaration of all Muslims as backward, a survey across the state to assess the backwardness of Muslims, and extending all the benefits to Muslims that other backward classes enjoy.

Bukhari also demanded the immediate release and compensation for Muslims who have been “jailed under the pretext of action against terrorism.” He also urged Yadav to make special provisions for employment of Muslims in security forces of the state, setting up of educational institutes in Muslim areas, budgetary provision for imparting technical education in madarsas as well as establishing government-run Urdu medium primary, middle and high schools on the lines of Maharashtra.

Agreeing that the political, social, educational as well as economic condition of Muslims is “pitiable” in the country, Yadav reiterated that he is in favour of full implementation of the Rangnath Mishra Commission and Sachar Committee’s recommendations.

He said that soon after forming the government in Uttar Pradesh, his party members will discuss the issue with Muslims, intellectuals as well as legal experts and will give reservation on the lines of reservation given to Muslims in Kerala and Andhra Pradesh.

Meanwhile, in Sitapur, senior SP Azam Khan trained the guns on Congress, asking it to clarify its stand on the Batla House encounter probe. Recounting Congress general secretary Digvijaya Singh’s remark that the encounter was fake, he asked the UPA government to decide who was correct — Singh or Union Home Minister P Chidambaram, who had claimed that the encounter was genuine.

With all these no Ram Mandir in Janmabhoomi-Babri site was a promise and pulsation to woo the Muslim vote bank to crush down all the political opponents to Swamajwadi Supremo Mullah Mulayam Singh Yadav. 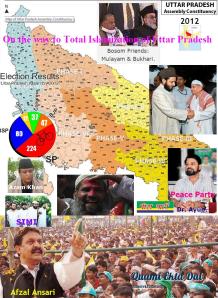 Actually, 70% of the state’s Muslim electorate, according expert analysis, had voted for Mr Yadav. For this, the two national parties, BJP and Congress, must accept blame. Mayawati said the Congress created the problem with its hard-selling of a special quota for Muslims in jobs and Muslim universities. Hindu voters panicked and moved towards the BJP, which played into their fears that the Congress would promote Muslims at their expense. Meanwhile, Muslims found that the Congress was not a strong enough party to back. So UP Muslims opted for Mr Yadav as the new Maulana Chief Minister in Uttar Pradesh.

The decline of BJP base in Uttar Pradesh and immature Hindu sentiment for building a Hindu Vote Bank in UP or elsewhere in India, will compel us to watch no Ramjanmabhoomi Temple in Ayodhya, forceful cow slaughter in Hindu areas, political supremacy of Muslims in Uttar Pradesh, heavy reservation in services, jobs, business and all other sectors in Uttar Pradesh as a role model of Islamization of future India. Perhaps, this Islamic lead in Uttar Pradesh has been designed for the destiny of rest of India also.  (Though, RSS will still murmur in a dream to capture Pakistan and Bangladesh in the name of an Akhand Bharat. God will never save us for such a lie).

I heard another mockery in the pre-pole days. The Swami Ramdev  Team and Team Anna were also in election operations in disguise  to protect the Uttar Pardesh people from corruption and collaborators vested in the anti-national powers. Would they not be able to do worst than this?

Defensive Hindus will be wiped out by the offensive Muslims in India ­– this is the sermon of this unpleasant parable.

15 comments on “Coming Islamic regimen will stop Ram Janmabhoomi Temple and start forceful cow slaughter in Uttar Pradesh. Hindus will be put in a peril.”