Rampant Muslim appeasement in West Bengal by Mamata Banerjee. Who will stop this Islamic Insanity?

Why Mamata Banerjee distributed bicycles only to Muslim Girl students of West Bengal?

She is an MA in Islamic History from Calcutta University. She has an Islamic legacy indeed. With the help of International Islamic lobby, she capably changed the regime of 34 years old Left  Front Govt.  in West Bengal. Sky is not the limit as Allah has forbidden the sky and moon for human beings. Her destination is Islamic Bengal in West Bengal. Her logic, if West Pakistan was turned an Islamic state, why not West Bengal?  Once Mamta Banerjee claimed in Parliament that beef eating as a fundamental right. She loves Hijab and Islamic style of ‘pardha’. She and her Party TMC (TrinMool Congress, read Total Muslim Congress) are devoutly sacrificing for Islamic Cause to make Ma -Maati- Manush (Mother-Land-People), synonymous to Muslim Ma- Maati – Manush. Yes, got the great name of Miss (?) Mamata Banerjee, now mostly known as Mamtaz Baunu Arzee.

Claiming that the Trinamool Congress government in 16 months has fulfilled all its pre-2011 Assembly election commitments to the minorities, Chief Minister Mamata Banerjee said in a Govt.  function in Netaji Indoor Stadium on Wednesday 10-10-12 that it is giving utmost importance to minority welfare. Mamata Banerjee handed over bicycles to 34 Muslim girls studying in Madarsah (Quran School) in and around the city. Bicycles were also gifted to 760 other girls from minority schools in various parts of the city. “This is also a form of woman empowerment,” said the chief minister. She also disbursed aid under various schemes of the Minority Affairs and Madrasah Education Department and West Bengal Minorities Development and Financial Corporation. God knows how the women empowerment can happen in such a blatant deprivation with the  Hindu women and girls. Notoriously Mamtata Banerjee is dividing the society and even the students in tender ages with a filthy discriminatory method and hurt the Hindu girl students as they are not getting the by-cycles from the Govt. as they are not in Muslim community.

“I have kept the Minority Affairs Department in my hands because it is important for our government and requires continuous monitoring,” she said while addressing a gathering. Miss. Banerjee’s remarks are significant in view of the upcoming rural polls where the minority vote will be crucial. The scenario is filled with the heavy minority appeasement.

“Before the Trinamool Congress came to power, four lakh students were given loans and scholarships. We have increased this to 17 lakhs in 2011-12 and in the coming year we will extend the benefit to 22 lakh students,” Miss. Banerjee said

The budget of the Minority Affairs and Madrasa Education Department has been raised to Rs 1,000 crore, she said, pointing out that an additional budgetary allocation of Rs 350 crore has been made to the department.

She has also declared forthcoming establishments of  56 Muslim marketing hubs, where 56000 Muslims will get employments in coming days.

Mamata Banerjee  has already knocked the headlines by declaring Rs. 2500 pm as Imam Honorarium (now giving) and Rs. 1000 for Muazzins with other facilities, sanction of 10000 Madrashas in West Bengal, establishment of Aligarh Muslim University in WB, three Haj Towers in a row, huge loan and subsidy to the Muslim youths etc. etc.

Though Mamata Banerjee is habituated beating her own drum of success, most of the fund has come to West Bengal from Central Govt., through  the multi-sectoral development project (MSDP) for poor Muslim women, launched under the Prime Minister’s 15-point programme for minorities, which followed the Sachar report on so called Muslims’ plight.

She described her government’s decision to bring the minorities under the ambit of reservation by including them in the list of Other Backward Classes (OBC) as a major achievement. For fulfilling her desire Mamata Banerjee’s  Govt has also included Sheikh/Shaik (Sk.) Muslim community in the State OBC list and declared the matter publicly.

Of the 144 different categories who will benefit from the 17 per cent OBC reservation, 87 categories (59 in class A and 28 in class B) are Muslim minority, she said. See the calamity for Hindu OBC. only 57 Hindu communities are in OBC list and practically, they are the real minority in OBC people in West Bengal. What an Islamic charisma of Didi Mamtaz Banu Arzee.

“About 13-14 per cent reservation for OBCs the maximum will be for the Muslim minorities,” Miss Banerjee added.

She claimed the other achievement of her government related to minority welfare was the declaration of second language status to Urdu in areas where the Urdu-speaking population is more than 10 per cent.

Urging the people to maintain calm during the upcoming festivals, Miss. Banerjee warned those inciting communal tensions during the festivals. But, does not she know well that her Muslim brothers are the torch bearer of communal tensions in West Bengal ? Knowing fully well, she is telling a thing and doing another. 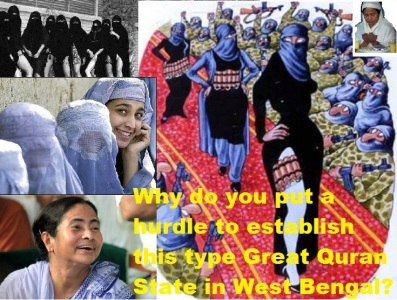 The Durga Puja festival (October 20-24) will be followed by Id-ul-Zuha on October 27, (2012) she said, adding that both are very important festivals for the State. Her intentions was readily available in reflections for allowing illegal cow trading/transport / holding market/ all for cow slaughter (all completely prohibited by Calcutta High Court) near Durga Puja Pandals must be allowed without hindrance.

Mamata Banrjee is now being as an Islamic tool of fulfilling Zinnah’s desire to keep Bengal out of Bharat. So, she is right to turn down the dream of Dr Shyama Prasad Mukherjee : West Bengal as a safe and secured land on Bengal Hindus. Shaking the hands of the descendants of the old Muslim Leaguers viz.  Nurar Rheman Barkati, Idrish Ali, Sultan Ahamed, Taha Siddique etc.,  Mamtaz Banu Arzee is rejuvenating the Muslim League’s activism in West Bengal again. The recent march to American Centre in Kolkata by the fanatic Muslims is a good example for promotion of Islamic activities in Mamata’s regime.

If we consider the distribution of bicycle only to Muslim girl students in front of the vacant look of the depriving Hindu girl students is simply an introduction of the sadist attitude of Mamata Banerjee, we can’t a give a full stop there as Mamata Banerjee has the blasting power with optimum  Islamic arrogance to destroy  total Hindu clan from West Bengal.

(N.B. Afterwards all the students (girls and boys both) of IX to XII standard are also provided bicycles under a scheme named ‘Sabuj Sathi’, but after making a lot of discrimination to the Hindus at some material point of time! _ Editor, HE. dt 01.04.2015.)

5 comments on “Rampant Muslim appeasement in West Bengal by Mamata Banerjee. Who will stop this Islamic Insanity?”