Exclusive from Daily Pioneer: Hindu terror? No such group in Govt’s list of 34 banned.

PTI | Jan 20, 2013 |Jaipur &  New Delhi :: Union home minister Sushil Kumar Shinde has accused the BJP and the RSS of fanning Hindu terrorism, a charge which drew angry reaction from both of them.

“Reports have come during investigation that BJP and RSS conduct terror training camps to spread terrorism… Bombs were planted in Samjhauta express, Mecca Masjid and also a blast was carried out in Malegaon.

“We will have to think about it seriously and will have to remain alert,” Shinde said at the AICC meeting in Jaipur on Sunday.

As his remarks were slammed by RSS and BJP which termed them as “dangerous” and accused Congress of indulging in “destructive politics”, Shinde stuck to his stand, saying, “This has come so many times in the papers… It is not a new thing that I have said today.

“This is saffron terrorism that I have talked about. It is the same thing and nothing new. It has come in the media several times,” the home minister said.

Charging Congress with having a “destructive mindset which was reflected in the home minister’s statement”, BJP said it was “very objectionable”. “It is not only unacceptable but dangerous also,” party spokesman Mukhtar Abbas Naqvi said.

“There cannot be anything worse that the country’s home minister giving such an objectionable statement to disrupt peace and harmony of the country,” Naqvi told reporters in Delhi.

Terming RSS as a “nationalist organisation”, the BJP leader said, “Sonia Gandhi should apologise. Rahul Gandhi and home minister should also apologise, otherwise there will be serious consequences. This is not accepted. Such baseless things when said by home minister amounts to giving clean chit to real terrorists.”

“They abolished the tool to fight terrorism,” he said in an apparent reference to scrapping of POTA.

Attacking the home minister, RSS spokesman Ram Madhav described his statement as “highly irresponsible” and said he had made the remarks only to please his party bosses.

“If a Congress leader had said something like this it wouldn’t have mattered that much, but if the home minister of the country is saying something like this, it is highly irresponsible. This is all about playing votebank politics,” he said. : Union home minister Sushilkumar Shinde on Sunday sparked a major political controversy saying RSS and BJP were promoting Hindu terror. >>Read details in TOI. 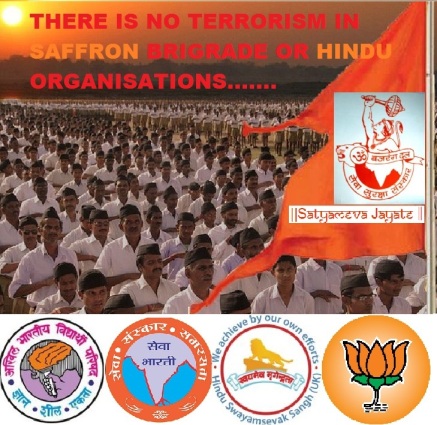 “What is the meaning of joining Hindu and saffron colour with terror? It is a downright insult of India’s spiritual, cultural and civilisational heritage. Hindus has always been generous… India is secular because Hindus respect the other view,” party spokesperson Ravi Shankar Prasad said.

“Saffron is the beacon of India’s spiritual and religious heritage, what is the intention behind linking saffron with terror?” he added.

“Forces in Pakistan will be the happiest today; Pakistan is always in a mode of denial, whether it is 26/112 or attack on the border, they will say look at what your home minister is saying,” Prasad said, adding, “When SIMI or Indian Mujahideen was banned, did we ever say it is Muslim terror? A terrorist is a terrorist regardless of his faith.”

Referring to the Sethu Samudram row, the senior BJP leader demanded an answer from Congress president Sonia Gandhi on what he termed as the repeated hurtful attacks on Hindu sentiments always.

“The BJP will not tolerate the use of Hindu terror or saffron terror in India. Sushilkumar Shinde must be sacked and PM and Sonia must tender unconditional apology,” he said.

“These are copy book cases on rank vote bank politics on terrorism and questioned the delay by the government in deciding on the mercy plea of Afzal Guru and its alleged slow response on the issue of illegal immigration,” he said.

He also announced that the BJP will launch a nationwide protest against UPA government on January 24 against Sushilkumar Shinde.  >>Read details in Zee News.