Intellectual policing on Islam must be an essential part in the life of Hindu culture. 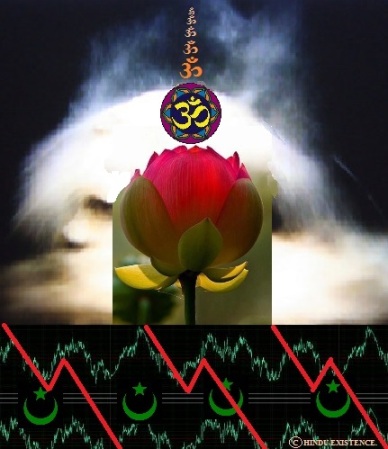 Since independence from British Christian Colonialists a number of developments have occurred in India that played an important part in shaping Hindu life. In the first place, India was divided by Islamists and bogus secular political leaders. There has been an increased recognition that all Muslims will go to PAKISTAN, an Islamic country. We have elected an atheist and anti-Hindu man Jawaharlal Nehru as the Prime Minister of India. Nehru believed in Islam, and his beliefs, thinking and action encouraged Muslims in India remain in India and to preach Islamic hatred and indulge in violence as prescribed in the Koran. Nehru and the anti-national Congress party have opened up the appeasement policy and special reservation and quota systems for Muslims. The activities the Nehru dynasty has in subsequent years have resulted in the demographic increase of Muslims. Subsequent Prime Ministers like Indira Gandhi, V.P. Singh, Deva Gowda, Manmohan Singh etc. continued pro-Islamic policies and programs. The ruling parties increased Hajj subsidy and pseudo secular Hindus never criticized pro-Islamist policies and or unwilling to let the majority Hindus study the Contemporary issues created by Islamic terrorists. Indian intellectuals, leftist liberals and pseudo secular Hindus never studied India beset by problems which are universally ascribed to inept handling of Islamic terrorism. Indian intellectuals, leftist academicians, and corrupt political leaders and phony secular leaders were reluctant to study the vital current Indian problems. What are the reasons for this?

In the first place many pseudo secular Hindus think that Sanatana Dharma is eternal and have the attitude that “all religions are the same” and special study of Islam is unnecessary.  Almost every political leaders, businessmen, military leaders, criminal justice administrators, religious leaders, and journalists, consider themselves as good Hindu and believes that they already know the ethical facts and principles of Hinduism on the basis of their own experience in dealing with Muslims. Unquestionably, these individuals, and other Hindus are responsible for the current predicaments and many of the social problems. But it is just as obviously true that they do not know enough to deal with some of the most significant social problems created my Islamists. Despite the vast erroneous knowledge and irrational information, they will find among good men the world over like Indian culture.  India’s intellectuals, Marxist academicians and the media pundits in India lack the knowledge how to handle problems created by Islamists. Industrial and social unrest, hate, prejudice, crime, violence, Islamic terrorism, love jihad, corruption, giving reservation to Muslims in all levels  and establishment of sharia court in different places,  continue to be major problems in India. But everywhere practical knowledge is lacking to problems created by Islamists. It must be pointed out that Indian administrators and criminal politicians lack the knowledge how to prevent the Islamic savages who succeed in killing Hindus.

The lack of understanding of Islam and Jihad results in failure to contain savage behavior of Muslims. Hindus are under constant threats from Islamists and in many states; Hindus are living in a prison of Islamic terror. And where are the bogus secularists, Indian liberals, Communist academicians and leftist intellectuals to educate the majority when they fear Islamic terror. It does not take a lot of imagination to understand how people behave when they are discriminated by the government and surrounded and attacked by Islamic savages.

In Kashmir all Hindus are killed. Some Hindus and other infidels or driven out, and they are living in refugee camps in their own country. Kerala, the land of Snakaracharya, Muslims will outnumber Hindus in few years. What does it say about the states of truth about Jihad, when the mainstream Indian media joins with corrupt politicians and Islamists? We can predict the outcome. Indian media, owned and operated by our enemies blame Hindus for their suffering by Islamic terrorists. Hindu women are raped; business attacked yet, the media blame the myopic Hindus. Good information is easily accessible and easily available on the atrocious behavior of Islamic criminals committed against innocent citizens. If the government administrators and Indian educated elites and leftist academicians want to eliminate full Jihad in India it is still possible. In India, there is a vacuum on the pseudo secular left, and Jihadist knows how to take full advantage.

Rather than seek to cultivate a united ideological font against Islam,  jihadi terrorist’s ideological roots, government of India, and Indian intellectuals did in fact did unilateral and emotionally irrelevant appeasement policy and played Islamic vote bank politics. It was like a hydra growing new heads.

However, the distinction between Islam (a closed desert Dogma) and open ended, systemic, pluralistic, Hinduism simply should not be pushed aside without an attempt to diagnose and exorcise some of the social, psychological, criminal problems created by Islamists by Indian intellectuals. And it is now a question of trying to find why Indian intellectuals, educated elites, and our politicians refuse to see the stereotypical presentation of Hinduism and Hindus in India and abroad. Are they suffering from a virulent form of cognitive disorder, unable to see the reality? “Cognitive Nihilism” hit them? Indian intellectual’s ideological prejudice shared with pseudo secular Hindus who are in deep denial, apathetic and indifferent. It would not take a genius to realize that there are distinction between Islam and Hinduism. Hinduism is highly eclectic, systemic, pluralistic, and open-ended and provides liberty to individuals. One wonders, why India’s intellectuals refuse to see the difference between a closed dogma and open ended Hindu philosophy. Although Islam is often powerfully associated with state and central government in India, how can we deny the fact that Muslims have killed more than 80 million Hindus, and is associated with mass killing and violence and terrorism? Hinduism is peaceful, analytic, and methodological. Very few Islamic theologians or Mullahs will admit that Islam is extremely parochial and encourage its followers to annihilate all infidels from the world (Um-welt) and create Dar-ul-Islam. They are not interested in philosophical analysis. Muslims are clever in al-taquiya (lying) and disguises and disarms a more profound and interesting possible about the intentions of Jihadi terrorists in India.  Like caged parrots, Muslims are still singing that “Islam is peace”. It is clear, that the truthfulness of Islam is questionable. There is something intellectually cowardly about their claims. AS closed dogmatic and aggressive fundamentalists, Islamic theologians and Mullahs refuse to face intellectual challenges and dialogue.

Many phony secular Hindus, corrupt politician, Islamic religious leaders and corrupt bureaucrats have the attitude that Hindu values and life principles are unnecessary. Every criminal politician in India thinks that they know Hinduism and already know the essential facts about Islam, Maoism, and Marxism. On the basis of their own experience in dealing with Marxists, Maoists, and Islamists.

The division between Santana Dharma and Islam is the expression of a commitment of Mohammad and freedom of thought. And more over it is an eternal conflict of differing and opposed habit of thought. The deeper point is that the philosophical and cultural truth matters. Whatever they might be, we have to take sides, and there by become a part of sane world. Islamists claim that their Saudi Arabian Islam is perfect and is a perfected and closed and the Koran which contains traditional Saudi Arabian culture, absurdities and irrational ideas for aggression and violence against infidels needs no renaissance, revision or reformation. What Muslims have to understand, then is the broad-mindedness and tolerance of Hindus.

Indian intellectuals, Politicians and Hindus must exhibit a commitment to neutralize Islam and Muslim Jihadis. Incorrect, intellectually dishonest and phony statements that “all religions are the same” simply serve to perpetuate Islamic terrorism against Hindus.

Hinduism is no longer confines to India. As an NRI Hindu, I feel that Hinduism has so much to offer to the world beset by Islamic terrorists, coercive religious conversion and interpersonal problems. As responsible citizens of a democratic world, NRI Hindus and Indian intellectuals must apply the science of Hindutva to problems created by the desert dogma called Islam. India will prosper if Indian citizens can understand the current division in culture. It is extremely impossible for India to avoid corruption, Jihadi terrorism, criminal behavior of Maoists, and Muslims unless Indian intellectuals come to the view that Islam is cruel, rude, closed, nasty, and brutish.

In my view the cultural pathology of Muslim Jihadist must be stopped.  As a final thought, we might consider that there are two cultures-one humanistic, pluralistic, systemic, rationalistic, peaceful and tolerant. The other (ISLAM) is against democracy, human rights, pluralism, peace, and co-existence and even distorts humanist modernity. Muslims are brutal, intolerant, and aggressive.  Hinduism is truth and meaning, knowledge and wisdom. Islam is opposed to harmony, religious tolerance, and not in favor of social progress, science, technology and modern industry.

Islamists are probably the absolute worse human right violators of Hindus in the world. Since the Indian media and the Sonia administration have in varying degrees decided to ignore or whitewash this otherwise growing epidemic of human pain and suffering of Hindus. Muslims are conditioned to believe that Hindus are hypocrites, fanatical, intolerant and the source of the world’ vows. In fact, Hindus are the by far the most persecuted religious groups around the world.

I wish, pro-Islamist corrupt politicians, leftist academicians, and elite pseudo secular Indian intellectuals read all the passages in the Koran which promote, instigate and motivate Muslims for violence against infidels. So, the duty of the peace loving and patriotic citizens to save India from the supremacist Islamic power, cannot be ignored anyway.

Intellectual policing of Islam and continued dialogue on the philosophy (?) of Mohamed may reduce antagonism and mutual misrepresentation between the close ended Islam and open ended Hinduism.

Intellectual policing of Islam must be an essential part  in the life of Hindu culture.

9 comments on “Intellectual policy on Islam and Hindu Vigil.”

This entry was posted on May 14, 2013 by hinduexistence in Bharat (India) under Attack, Breaking Indian National System by Muslims, Check Global Jihad, Hindu Culture and Tradition, Hindu Education, Hindu Population, Hindu Tradition and Culture under attack, Hindus under Islamic Aggression, Islamic Menace, Jihad in Hindustan, Save India from Supremacist Islamic Conspiracy, Stop Islamic Menace in India, World under Islamic Aggression, World under the attack of Islam and tagged Are all religions same?, commitment to neutralize Islam and Islamic Jihad, ideological roots of Jihad, Intellectual policing on Islam, Intellectual policy on Islam, Intellectual policy on Islam and Hindu Vigil, Jihad and Terrorism, knowledge of how to handle Islamic problem, Mullahs refuse to face intellectual challenges and dialogue.