Nasty mind-set of Islam. Ban Islam as they want to ban you.

Friends, It’s a Global warning! Please don’t ignore it anyway. Muslim Judge wants to remove Hindu Statues in Malaysia. Saudi Arabia declares all Non Muslims are terrorists in new law to crack down on political dissidents.  Jihadi Terrorism is an unthinkable crisis for the Human Civilization. Even then we have to tolerate these filthy Muslim creatures!

We have just two options in our hands. First is to welcome these Islamic mentalities and workout reciprocally. We should start initiative to remove all Islamic foundations (Mosques-Madrasas-Seminaries) in Non Islamic countries as Muslim countries do not allow Non-Muslim Temples, Churches, Monasteries, Synagogues etc.  And pass necessary legislation in all Non Muslim Countries to declare Muslims as eventual terrorists. We have to crush down the Global Jihad challenging us every second.

And the second option is: Boycott Islam. Say No to Islam as it is just dangerous. Ban Islam as they want to ban you. 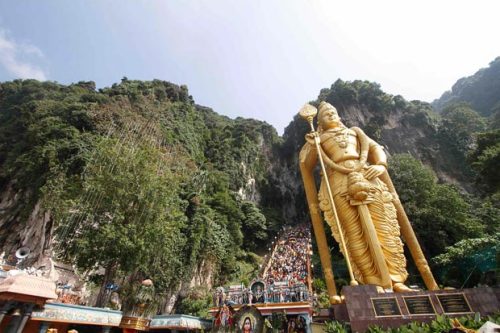 Hindu devotees climb the a 272-step staircase next to the giant statue of Lord Murugan to the Batu Caves temple to complete their pilgrimage during Thaipusam festival outside Kuala Lumpur. — Reuters pic.

Boo Su-Lyn | Malay Mail | Kualalumpur | APRIL 16, 2014:: The “huge” statues at a Hindu temple in Batu Caves and Buddhist temple in Penang are an affront to Islam as the religion forbids idolatry, a retired Court of Appeals judge said.

Datuk Mohd Noor Abdullah stressed that such sculptures of non-Muslim deities should not be built in the open, but should be placed within an enclosed building instead.

“With such a huge statue, you’re showing that your religion is all mighty and powerful,” Mohd Noor told The Malay Mail Online and Bernama in an joint interview yesterday, referring to the 42.7-metre high statue of Lord Murugan, the Hindu warrior god, at Batu Caves in Selangor.

Pointing to the Federal Constitution which states that Islam is the religion of the federation, the former judge insisted Islam is above other faiths.

“When non-Muslims build such big idols, it hurts people’s feelings,” he said.He added that non-Muslims had freedom of worship, but that such freedom must be exercised in a way where “Muslims don’t feel threatened”.

The retired judge also criticised the 30.2-metre high statue of Kuan Yin, the Goddess of Mercy, at a Buddhist temple at Air Itam, Penang.

“Islam forbids images (of gods). Here, you allow images of Buddha in the country. That’s not consistent with Islam. But if you cover it up, you can allow it,” Mohd Noor said. [Read details here…]

Saudi Arabia declares all atheists are terrorists in new law to crack down on political dissidents. 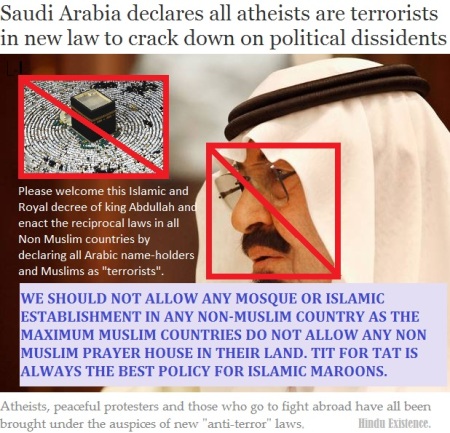 Adam Withnall | The Independent | London | Apr 1, 2014::  Saudi Arabia has introduced a series of new laws which define atheists as terrorists, according to a report from Human Rights Watch. In a string of royal decrees and an overarching new piece of legislation to deal with terrorism generally, the Saudi King Abdullah has clamped down on all forms of political dissent and protests that could “harm public order”.The new laws have largely been brought in to combat the growing number of Saudis travelling to take part in the civil war in Syria, who have previously returned with newfound training and ideas about overthrowing the monarchy.To that end, King Abdullah issued Royal Decree 44, which criminalizes “participating in hostilities outside the kingdom” with prison sentences of between three and 20 years, Human Rights Watch said.Yet last month further regulations were issued by the Saudi interior ministry, identifying a broad list of groups which the government considers to be terrorist organizations — including the Muslim Brotherhood.Article one of the new provisions defines terrorism as “calling for atheist thought in any form, or calling into question the fundamentals of the Islamic religion on which this country is based”.Joe Stork, deputy Middle East and North Africa director of Human Rights Watch, said: “Saudi authorities have never tolerated criticism of their policies, but these recent laws and regulations turn almost any critical expression or independent association into crimes of terrorism.“These regulations dash any hope that King Abdullah intends to open a space for peaceful dissent or independent groups,” Stork said.Human Rights Watch said the new regulations were also a setback to campaigns for the protection and release of a number of prominent human rights activists currently jailed in Saudi Arabia. It said Waleed Abu al-Khair and Mikhlif al-Shammari recently lost appeals and will soon begin three-month and five-year respective sentences for criticizing Saudi authorities.The organisation said the new “terrorism” provisions contain language that prosecutors and judges are already using to prosecute and convict independent activists and peaceful dissidents.

4 comments on “Nasty mind-set of Islam. Ban Islam as they want to ban you.”

This entry was posted on April 17, 2014 by hinduexistence in Attack upon Hindu Temple by Muslims, Attack upon Hindus & Hindu Temples, Global Jihad, Hindus against Jihad, Hindus under Islamic Aggression, Islamic Menace, Say No to Islam, SAY NO TO RADICAL ISLAM, STOP MOSQUES IN HINDU AREAS, World under Islamic Aggression and tagged ‘Huge’ Hindu - Buddhist statues against Islam, Ban Islam as they want to ban you, Muslims want to remove Hindu Statue, Nasty mind-set of Islam, Saudi Arabia declares all atheists are terrorists, Saudi Arabia wants to declare all non-Muslims as Terrorists.