Social activists headed by APSB met Governor of West Bengal to seek personal intervention for the protection of cow progeny, women  and Sanskrit language in the state. 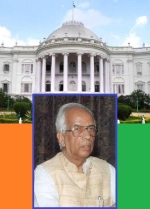 All the delegates met WB Governor are well engaged with cow protection with their own discipline of social activities.

The memorandum contains  the salient features as A. Cow protection and Stop Cow slaughter in West Bengal. B. Stopping the honorarium of Imam and Muazzin ( as per Calcutta High Court’s order dated 02/09/2013 out of WP 358 Of 2012, WP No. 8662  of 2012, WP No. 9163 of 2012, WP No 11118 of 2012). (C) General Law and Order situation including growing fatal consequence upon girls and women in the State of West Bengal and (D). Restoration of the dignity of Sanskrit and Hindi languages and removal of illogical status of Urdu language as second language in West Bengal.

While Shrikant Sharma Balvyas and Dindayal Gupta discussed over the matter related to cow protection and vulnerable situation for women protection in the state, Upananda Brahmachari and Yogesh Shastri pointed out the State Govt.’s unlawful motives for allowing honorarium to Imams and Muazzins even after Calcutta High Court’s specific order to stop the same through its judgment on 02/09/2013 as passed by Mr. Pranab Kr Chattopadhyay (J) and Mr. Murari Prasad Shrivastava (J).

Upananda Brahmachari further had to draw the notice of Governor as the state deliberately ignoring the protection of Sanskrit languages and illogically giving much importance of the Urdu language in a process of discarding the status of Hindi language in a very unjustified manner.

Hon’ble Governor of West Bengal took all the matters seriously and assured to address the matters with State Govt. for proper actions accordingly.

Shri Kesri Nath Tripathi is the 20th Governor of West Bengal is a known educationist and famous for his literary works in the academic field.