International Response Is Needed to stop Forceful Conversion and Marriage of Minority Hindu Girls by Bully Muslims in Pakistan.

Pak Govt. Must Return Anjlee Meghwar to Her Home with Immediate Effect. 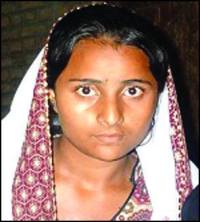 Anjlee Meghwar was abducted from her home in Pakistan by Muslim miscreants on Oct 23rd, 2014

HENB |Delhi and Karachi | 4 Nov 2014:: Anjlee Kumari Meghwar, daughter of schoolteacher Kundan Mal Meghwar, a resident of Mustafa Abad Mohalla, disappeared a week ago, residents said. Subsequently, rumours surfaced that she had eloped with Riaz Sial, son of Anwar Sial, a resident of Maswan Mohalla. The girl’s parents and community, however, allege that she was kidnapped and forcibly converted to Islam.

The alleged forced conversion of the Hindu girl, identified as Anjlee Kumari Meghwar, has triggered protests from her community in the Sukkur district.

The girl’s parents and community alleged that she was kidnapped and forcibly converted to Islam. Anjali was handed over to the police with help of an influential figure of Daharki, but the boy is yet to be arrested. The police said Anjali had converted to Islam at Dargah Bharchoondi Sharif and also recorded her statement under Section 164 in a court in Sadiqabad.

The Hindu community observed a shutter-down strike in the town, demanding the girl be handed over to her parents. An official at Daharki police station said that Anjali is still in their custody.

Mukhi (chief) of the Meghwar community, Jaswant Meghwar, endorses Namo Mal. “Anjali is just 12-years-old and therefore neither can she marry, nor can she choose another religion of her free will,” he said, demanding of the police to hand over the girl to the parents.

According to JFH (Justice For Hindus, a US based org working for Hindu Rights) sources, Anjlee Meghwar is a 12 year old Hindu girl who was kidnapped from her home at Massan Street in Daherki Pakistan on October 23rd, 2014.  The same outfit, one Mr. Pir Abdul Haq (aka Mian Mitho), who was responsible for the alleged kidnapping and forced conversion of Rinkle Kumari is said to be behind Anjlee’s kidnapping as well. Read about her case (here). After Angli was officially reported to be abducted by her parents (see FIR below) she was brought before Pakistan magistrate Atta Ullah Sheikh who verified her age and identity, but refused to return her to her parents.  Anjlee Meghwar has since been sent to the Majida Rizvi ‘s shelter home in Karachi Pakistan.  Abductions and forced conversions of Hindu girls in Pakistan by Islamist outfits is all too common and must stop.  Angli Meghawar belongs with her parents and not in a shelter home.  JFH will be working with Hindus internationally to stage demonstrations on Anjlee’s behalf.  We ask that the Pakistan embassies and consulates in America and other nations take action to return Angli to her parents safely.  We will remain vigilant on this case until Justice is served. See list of people you can call below.

Hindu Existence Forum urges intervention of Govt of India to get Anjlee Meghwar to her parents at home. 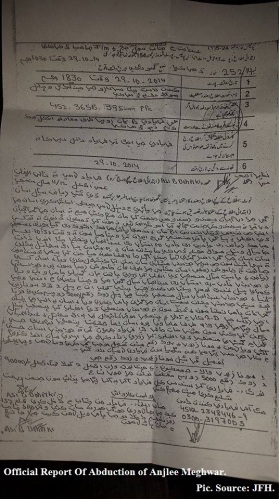 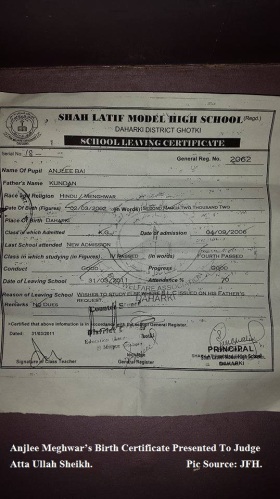 One comment on “International Response Needed: Pak Govt. Must Return Anjlee Meghwar To Her Home.”