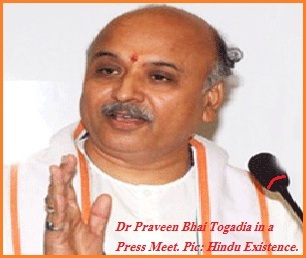 Upananda Brahmachari | HENB | Kolkata | 5 Oct 2014:: Dr. Praveen Togadia, the International working president  of Vishwa Hindu Parishad (VHP)  said Muslim infiltrators from Bangladesh should be sent back and Hindu refugees should be given citizenship, in a press meet here in Kolkata on Wednesday . He has also criticized a high handed Jihadi threat in West Bengal under the minority appeasement policy of ruling TMC Govt in WB.

Dr. Togadia said infiltration was a national issue and not isolated in Bengal alone. “Along with Bengal, there are about 3 crore infiltrators in Assam, Delhi and Mumbai. They are using India’s resources and employment,” he said.

Referring to terrorism, he said, “Instead of talking about Bengal alone, we should be worried about security in reference to Kerala, Tamil Nadu, Assam, Bengal and Kashmir. It is a concern for BJP-ruled states and otherwise. All state governments should work in tandem with the Central government to protect India against cross-border terrorism.”

Indicating the Madrasas as bomb making factory as revealed by NIA after Burdwan blast on Oct 2, Dr Togadia urged all madrasas in West Bengal to be shut down.  He said: “It has been proved beyond doubt that madrasas are breeding grounds of terror. They should be shut and people running them should be tried in the court of law,” he said in an apparent reference to the National Investigating Agency’s probe into the functioning of two madrasas in Burdwan district where suspected JMB functionaries imparted terror training.

Togadia said the Hindus studying in the madrasas “could go to other schools”. He said VHP has already provided free education to about 50 lakh Hindus in one lakh villages and in the next two years, it intends to provide free medical aid in all districts in India.

“Centre and the state governments concerned should work together to fight against cross-border terrorist elements,” he said referring to the October 2 blast in Kghagragarh in  Burdwan district of West Bengal which claimed the lives of two suspected JMB terrorists.

Dr. Togadia said that more than 1000 delegates will participate in the World Hindu Congress, to be organised in Delhi from November 21-23, and evolve strategies regarding health, education, security and empowerment of Hindus in India and abroad.

“We Hindus are majority in India. We will have a greater say and everyone should respect Hindu views,” he said.

Dr. Togadia obviously hinted at the responsibility of Central Govt for a terror free Bengal including the citizenship rights of Bangladeshi Hindu refugees.