VHP claims it re-converted over 200 Christian tribals in Gujarat 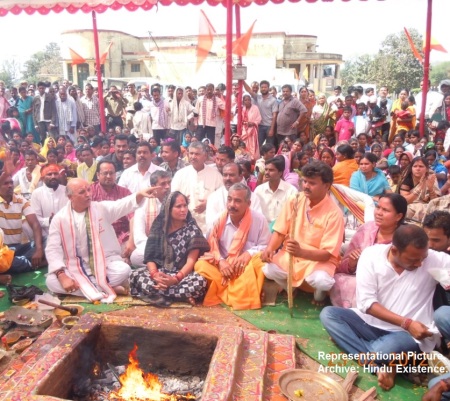 The right-wing outfit also said the re-conversion was “voluntary” and not by force.

“As part of the ongoing ‘Ghar-Vaapsi’ programme, VHP on Saturday re-converted 225 people from Christian community and took them back into Hindu religion,” said Valsad district VHP chief Natu Patel.

He said VHP organised a ‘Maha Yagnya’ (ritual of the sacred fire) for “purification” of the tribals before taking them back in Hindu-fold and also gave each of them a copy of Bhagwad Gita.

Another VHP worker, Ashok Sharma, said around 3,000 people had gathered at the ‘Ghar-Vaapsi’ programme in Valsad, which culminated today.

“VHP onSaturday greeted around 225 people back in their own religion in Valsad. We have not forced them, they came on their own wish,” Sharma said.

The incident came against the backdrop of a raging debate over such programmes being organised by Sangh Parivar groups in various parts of the country.

A controversy had erupted early this month when a right wing group had organised a ‘Ghar-wapasi’ drive wherein it reportedly converted about 100 people from a minority community in Agra in Uttar Pradesh.

The incident had created a ruckus in the Rajya Sabha with the opposition demanding a statement from Prime Minister Narendra Modi.

A similar incident was also reported from BJP-ruled Chhattisgarh where a party MP had claimed 39 tribal Christians were re-converted to Hinduism in Naxal-hit Bastar district in October this year.

In its response to the opposition over the conversion issue, BJP has demanded bringing of anti-conversion law. [eIndiaToday]. 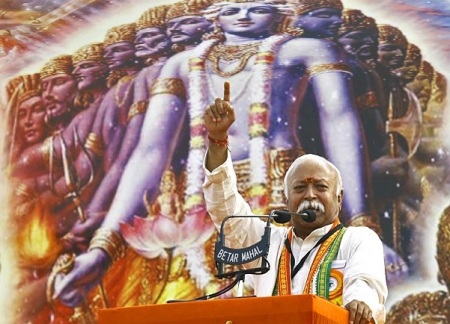 Hindustan Times | Kolkata | December 20, 2014:: The campaign to help people of other faiths reconvert to Hinduism will continue, Rashtriya Swayamsevak Sangh (RSS) chief Mohan Bhagwat said on Saturday, daring political rivals to bring in a law to ban religious conversions if they wanted to stop ‘Ghar Wapsi’.

“Those who have lost their way were separated from us. If they want to return home, we will bring them back home,” Bhagwat told a first of its kind gathering of Hindu groups and their supporters in central Kolkata.

“It is like a thief who steals our valuables. The chief is caught and we will get our valuables back. They are ours.”

Religious conversions have long been a lightning rod for identity politics in India, whose history is scarred with episodes of blood-letting of citizens divided on faith and ethnicity. Such religion-driven politics took a backseat in the last decade of economic boom, but signs of a more assertive Hindu right have surfaced since the election of Prime Minister Narendra Modi, adding to a climate of fear.

Earlier this month, Hindu groups claimed to have reconverted dozens of Muslims in Agra, Uttar Pradesh and announced plans for more ‘Ghar Wapsi’. Islamic leaders and clerics have bristled at this, vowing to counter the Hindu proselytisation drive.

Bhagwat dared those opposed to the ‘Ghar Wapsi’ campaign to bring in a federal law to stop it, echoing comments made by Bharatiya Janata Party (BJP) president Amit Shah in Kochi earlier in the day.

“(The) BJP is against (forcible) conversions and that is why we want to bring a law. (The) so-called secular parties should support (the) BJP’s move,” Shah told reporters, rejecting allegations made by Congress vice president Rahul Gandhi that the saffron party was trying to divide the country on communal lines.

Most political parties, including the Congress, are against any law restricting religious conversions, saying such a move, although ostensibly intended to protect people from being forced to change their beliefs, would be in conflict with constitutional guarantees on religious freedom.

Calling on all Hindus to “stand upright”, Bhagwat said if Hindus rise the world would benefit and it would give “sleepless nights to opportunists and wrong doers”.

“We are not infiltrators, we will not run. This is our land. While we were sleeping, something has gone lost. We will bring it back,” he said.

“In our motherland it is necessary that Hindus rise. So that anyone whoever they worship is secure and prosperous. Only the Hindus can do it.”

He took a dig at Pakistan, saying the people of that country had been unhappy ever since separating from India.

“Pakistan was part of our Bharat Bhumi. Something happened in (19)47 and they got separated. But they were a part of Bharat Bhumi. You tell me, are the people there happy now?” 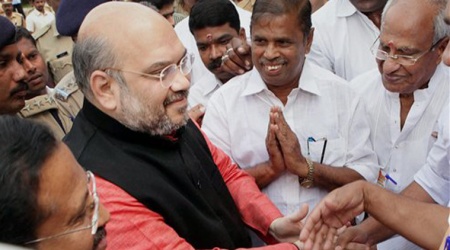 Shaju Philip | Indian Express | Thiruvananthapuram | December 20, 2014::  With the Opposition mounting a sharp attack on the Central government over the issue of religious conversion, BJP president Amit Shah said Saturday his party was opposed to “forcible conversion” and favoured a law against it.

Targeting the Opposition, he said the “so-called secular parties” have not made their stand clear on the issue. “If these parties are sincere in their approach towards secularism, they have to come forward and make clear their stand on forcible conversion.”

Shah refused to comment on the ‘ghar wapsi (reconversion)’ campaign of RSS affiliates. “Since the issue is before the court, I don’t want to comment,’’ he said.

He said there was no basis in the allegation of Congress vice-president Rahul Gandhi that the BJP was dividing the country on communal lines.

He said a special investigation team had been formed. Bilateral treaties, he said, had slowed down the pace of action but the Prime Minister had intervened to clear hurdles.

On his party’s strategy for Kerala, Shah said the NDA had to be strengthened in the state and the BJP wanted to bring in its fold 40 lakh people. He said the BJP would try to put up a strong show in the next elections to local bodies. The state unit of the party, he said, would work out plans in this regard.