14 th Feb may be a day of hard tussle in India this year between the concept of down grading V-Day celebs (believe in open love-lock or lip-lock) and the morale activities of nationalist Hindu organizations.

Hindu hardliners to preach message of Love in V-Day by worshiping their parents as per Indian tradition.

Sumita Jain | HENB | Lakshmanabad (Lucknow) | 13 Feb 2015:: The Right wing Saffron outfits Hindu Mahasabha and Bajrang Dal have planned to oppose “western ways” of displaying affection on Valentine’s Day this Saturday, 14 th Feb as it is nothing but “the International conspiracy to flood Indian society with illegal excesses of love, sex and foreign gift items through the odd day celebration”.

Hindu Janajagruti Samiti has described the observation of Valentine’s Day, as a cultural conversion of Hindus!

While those in Vadodara and Ahmedabad are preparing to celebrate February 14 as a day of “love and worship” for parents, Bajrang Dal members in Lucknow are planning to take priests along to “help” lovers in parks get married on the spot.

In Vadodara, followers of Asaram Bapu  are leading a campaign with multi-faith posters depicting children celebrating the day with their parents under this caption: “Matru-Pitru Pujan Divas, Abba-Ammi Ibadat Divas and Parents Worship Day”.

Already the Chhattisgarh Govt has made it official to observe Matru-Pitru  Diwas in grass root level. While it is expected that most of the BJP run states will promote this programme, the Hindu Organisations loke Sri ram den and Hindu Mahasabha will oppose the excesses of ill culture and rave parties held in V-day celebrations.

“If there is any Hindu festival which comes close to Valentine’s Day, it is Basant Panchami when new blooms add a festive hue to the atmosphere and there is a traditional way of celebrating it.

“But, these celebrations are now on the wane and the youth are embracing western traditions,” Hindu Mahasabha President Chandra Prakash Kaushik said.

“Our teams consisting of boys and girls carrying white roses or other flowers will visit malls, parks, historical monuments and other places frequented by young couples on Valentine’s Day in major towns and cities in the country,” Kaushik said. 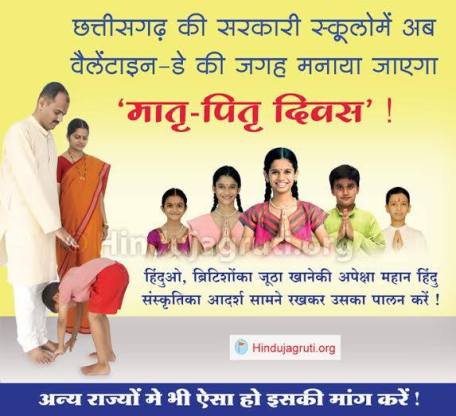 The Hindu Mahasabha has chalked out a nationwide strategy to deter youth from displaying their affection in public warning that they could be married off.

“We are not against love as we are the country which has spread love all over the world but we are against the western influence on our society and by offering white flowers we will be spreading the message of peace,” he said.

Hindu Front For Justice, a Lucknow-based group working “for providing justice to Hindus” has also opposed Valentine Day celebrations on February 14 saying it has no relevance nor does it suit the Hindu way of life.

“As per the shastra (scriptures), Basant Panchami is the Hindu equivalent to Valentine’s Day but we celebrate it with dignity and as per the Hindu dharma and customs,” Hari Shankar Jain of the Front said.

Hindu Mahasabha leader Kaushik sees in the hype around Valentine’s Day an influence of consumerism and role of oreign and multi-national business establishments to reap financial gains even from the pockets of Indian youth .

Each year on February 14, many people exchange cards, candies, gifts or flowers with their special ‘valentine’ on the special day and visit hotels, restaurants and malls to celebrate the occasion.

In Mumbai, Yoga Vedanta Samiti organizes a large ‘Matru-Pitru Din’ where  HJS is to participate with full force.

News reach to our desk that the overseas disciples of Sant Asaram Bapu will observe Parents Worship day in some cities in Europe and America and they have already rejected the concept of western V-Day celebration.

(—–with inputs from PTI)

Courtesy: Links and pics used above.