A mixed repercussion halted public nuisance in the name of Valentine day celebration in India.  Thanks to Hindu Organisations.

Aditi Mishra | HENB | New Delhi | 14 Feb 2014:: It was heavy brawl in  Mangalore, a city in Karnataka in the year 2009, when Sri Ram Sene, a Hindu Right Wing organisation vehemently objected the public nuisance in the roads and parks between teen boys and girls in the name of celebrating Valentine day and over-flooding participation of unmarried couple in the pub and rave parties.

While the love crusaders charged Sri Ram Sene for unauthorized moral policing, Sri Ram Sene cadres retaliated that they could not allow perversion in society and all such pre marriage sexual relation, drinking alcohol, taking drugs, hiring girls or a day and making all such odd things in valentine day,  one could not act in his/her circle, in front of his relatives and friends even!

Rights wings in India then up-roared, Women Commission intervened, Case started against Sri Ram Sene, but that was a significant start to oppose the excesses of V-Day on 14 Feb in India, and that trend reaches almost all the corner of India today, as the Right wing Hindu groups adopt this opposition in their annual agenda.

Some Right wing Hindu organisations like Bajrang Dal, Akhil Bharat Hindu Mahasabha,  Sri Ram Sene, Hindu Janajagruti Samiti, Rashtravadi Shiva Sena, Yog Vedanta Samiti and others came to street to materialize their own plan to protect and preserve the Indian Culture and Heritage which is being polluted with the unwanted ways of observing the Valentine day on 14th Feb. Some of them wanted to chase the ‘hostility of love’ in public and some of them made the day observation as ‘Parents worship Day’ or as a ‘Give blood day for loved one’.

However, there were no reports of any ‘couples’ being harassed by the Hindutva outfit thus far. The police were maintaining a tight vigil at several public places and main thoroughfares of the city to swing into action in case of any difficulty.”

The paper highlighted the Hindu retaliation on V-Day from Hyderabad and Cyberabad (Telengana, earlier Andhra Pradesh), Kanpur (UP), Bhubaneswar (Odisha) and Jammu (J&K).

As per The Hindu, Bajrangdal cadres flared up in the streets in Hyderabad and burnt a effigy of anti-Hindu culture.

The Delhi based Right-wing outfit Akhil Bharat Hindu Mahasabha claimed that it had been scanning Delhi’s electoral rolls to “identify Muslim and Christian men” who they suspect could sway Hindu girls. This organisation connected Love Jihad with Valentine day to take away Hindu girls from its original seat to Muslim and Christian society.  With Valentine’s Day approaching, it said it has been keeping an eye on them for the past one week.

As  HT reports, “The Delhi Police detained several college students protesting against the Akhil Bharat Hindu Mahasabha, a right-wing Hindu group that vowed to marry off unwed couples indulging in public displays of affection on the occasion of Valentine’s Day on Saturday. 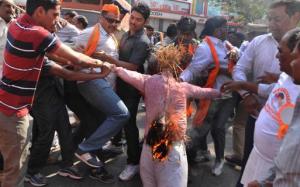 Bajrang Dal activists burn an effigy during a protest against the Valentine’s Day in Hyderabad on Saturday. Photo: G.Ramakrishna, HT.

Hundreds of Delhi University and Jawaharlal Nehru University students dressed in wedding costumes descended on the Mandir Marg office of the Akhil Bhart Hindu Mahasabha in the capital, demanding a mass wedding in what they said was a protest against the ‘politics of oppression’.

‘Since the Hindu Mahasabha has come up with this wonderfully generous plan… we felt that the least we could do is to make the execution of their plan easier,’ the organiser of the student protest Vidhyalakshmi Kumari posted on Facebook.

The police, however, picked them up before they could assemble for the protest and took them to two nearby police stations in four buses amid scuffles, according to an eyewitness. A huge crowd later gathered outside the police stations to demand the release of the detained protesters.

The Akhil Bhart Hindu Mahasabha earlier said it would dispatch teams to parks and shopping malls across the capital on Saturday to target canoodling couples”.

“Out of such agitations, we saw a good situations in parks and streets in Delhi, some how ‘sacch-bharat-abhiyan’ had an effect on this day”,  Samiya Roy, an IT professional expressed herself to HENB and reacted further,’we should not behave like that which is not suitable in Indian environ and unthinkable in relative circles. Stealing is not a good habit’.

Joke of Bangalore, it is a headway to find the space for love! The love pokers are reclaiming public spaces for love and Pubs are made as the new parks as flashed in TOI.

Even then it’s a great fight of the so called love crusaders want to charge their He-Man-Ship and Hero-Worship in a very ridiculous way.

Really, this year the repercussion against V-Day nuisance is seen Nation wide. And illogical excesses of it put on a halt as various Hindu organisations came to the ground jointly and succeeded.

Courtesy: Pics and linked used above.

2 comments on “A mixed repercussion for Valentine day in India. Public nuisance halted by Hindu Organisations.”