Kashmir is not Geelani, Hurriyat or Pakistan’s Paternal Property. Annual Amarnath Yatra will be for Full fledged 60 days.  If Amarnath Yatra is curtailed anyway, Adhan, Jamaat, Jalsa and Jamindaari all will be curtailed at once. 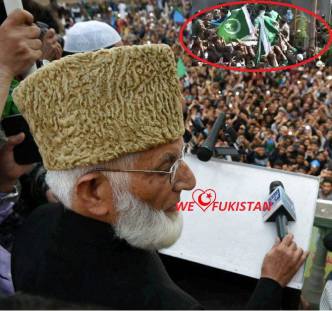 Upananda Brahmachari | HENB | New Delhi | May 2, 2015::  Enough is enough. Now it is time of showing Hindu valour to kill all Pakistani agents and subversive elements in  Indian soil without any delay or hesitation. This country is obviously of the Govts. in states and center. But, undoubtedly this holy land also belongs to all patriotic citizens who consider it as Mother land. When some religious lumpen and fanatic goons try to harm this land of irs own entity, certainly the citizens has no bar to defend it in any way any manner.

Now, the bastard Pak agent and fundamental Hurriyat leech Syed Ali Shah Geelani came forward to obstruct the yearly Amarnath Yatra in Kashmir valley by the instigation of Pakistan by issuing a fatwa to restrict the Hindus’ second highest (after the highest altitude Kailash-Mansarivar yatra) pilgrimage within a span of 15-30 days.

Shedding crocodile tears Syed Ali Shah Geelani said that the annual Amarnath yatra in south Kashmir Himalayas should be restricted to 30 days for “safety” of pilgrims and “protection” of environment. But, the world knows the filthiest creatures named Muslims as the ‘danger’ of Humanity and the ‘destroyer’ of environment.  Aha! Who are saying now the words like “safety” and “protection”?

“It is being said that our pandit brothers, who left, have to be resettled. We have never opposed their settling in Kashmir. We have been saying for years that they should be brought back, but they should be allowed to live amongst us. The creation of separate neighborhoods for them is not acceptable to us,” Geelani said all these out of seer pretension, while addressing the rally. But, these Hurriyat, JKLF and other Islamic outfits driven out all Kashmiri Pandits, Hindus and Sikhs some 25 yrs back only to claim Kashmir under exclusive Islam. Now, when Kashmir Hindus want to reclaim Kashmir again, these sons of bitches are started barking.

“We advise the government to restrict the yatra to one month like Uttarakhand-Gangotri yatra time table. It will be safe for the pilgrims as well as the environment,” Geelani said addressing a public rally in Tral, 35 kms from Srinagar, in Pulwama district.

This year, the yatra to the holy cave shrine will be for 59 days from July 2. But, who is this Geelani to direct the Govt and Hindus for their religious activities from a open rally?  Who gave the authority to Geelani to fix the Hindu pilgrim schedule for Amarnath Yatra?

The rally, which was the first in seven years by the separatist leader in the militancy-infested township, witnessed pro-Pakistan sloganeering and waving of Pakistani flags.

At an April 15 rally too held by Geelani, Pakistani flags were waved by supporters which led to filing of case against him, his close aide Masarat Alam Bhat and others on sedition and other charges.

Bhat was arrested the next day and booked under the stringent Public Safety Act a week later. But, this Geelani is roaming free to moment Muslims against Hindus.

It will not be unfair to kill such demons who are against Hindus and obviously against India.

These subversive elements must not forget that  Kashmir is not Geelani, Hurriyat or Pakistan’s Paternal Property. Annual Amarnath Yatra will be for Full fledged 60 days.  If Amarnath Yatra is curtailed anyway, Adhan, Jamaat, Jalsa and Jamindaari all be curtailed at once in other parts in India including Jammu.

Geelani, Yasin Malik and other Islamic morons have been saying that Amarnath Yatra, Panoon Cluster Rehabilitation are detrimental to the Islamic demography of Kashmir valley. These bloody swines forget the Hindu History of Kashmir or the Buddhist History of Ladakh. The bigot 1436 yrs old Islam will dominate 2015 yrs Christianity, 2558 yrs Buddhism 5775 yrs Judaism or at least 6000 yrs old historic Hinduism in this world. And the others will bow down to Islam without any protest!

As Islam has crossed all limits of showing humanism, tolerance and respect to others, now they have to taste all the fires from others.

If any single untoward incident is to be perpetrated on Amarnath Yatra this year in Kashmir, the Muslims in other states in India will be put in a very vulnerable condition. Don’t try to blame then Hindus.

Don’t try to disturb Amarnath Yatra any way.  Stop Amarnath Jihad. It will make a devastating disturbance to Islam in India.

Courtesy: Pics and links used above.