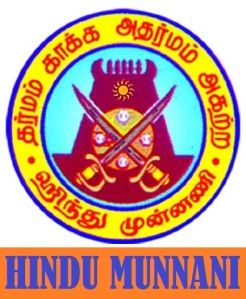 HENB | Coimbatore |  June 3, 2015:: Hindus are under threat from Islamic terror outfits and Maoists, but no party is raising its voice against this, Hindu Munnani founder-leader Ramagopalan said here in a communication to HENB.

“Hindus in Tamil Nadu are under severe thereat from Islamic terror outfits and Maoists. Many Hindus have been killed or brutally attacked. But political parties are not raising their voice against it as they depend on minority vote banks,” Ramagopalan told media-persons after a special meeting of the Munnani’s executive committee in the city on 17 May for the preparation of upcoming Tamil Nadu State Conference scheduled on 7th June.

He also alleged that Maoists were roaming freely in Tamil Nadu and the leaders of Hindu organisations continued to get threat letters from extremists and that the government has not initiated necessary action.

Asked what the State government should do to check Maoism, he said, “We can only expect the it handle Maoists in the way a responsible and self-respecting government would handle the issue”.

Ramagopalan claimed that he had enough evidence to prove that Islamic terrorism was gaining strong ground in Tamil Nadu. “I have proof, but even if I share it with the media, they will not publish it. We will hand over the proof if officials ask for it and gain our trust that action will be taken against those involved”.

The Hindu Munnani will conduct its seventh State conference in Coimbatore on June 7 at a ground near CODISIA.

Ramagopalan said that resolutions will be passed at the conference urging the government to pass anti-conversion bill, and initiate action against Love Jihad and Naxalism. He also said that their organisation will fight till the government returned temples under the Hindu Religious and Charitable Endowments department back to the people.

“The aim of the conference is to unite Hindus and continue our campaign to regain the rights of Hindus. We are working towards bringing at least one lakh people who have the Hindu sentiment, especially youngsters, from all over the State,” said Ramagopalan.