Arrest of Samir Gaikwad in Pansare murder case is nothing but a conspiracy to ban Sanatan Sanstha. 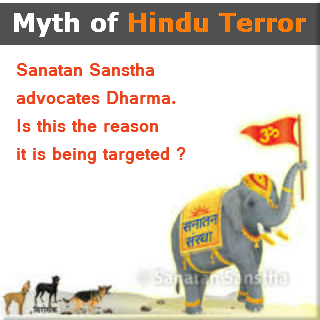 Samir Gaikwad, arrested by the Police in connection with Comrade Govind Pansare’s murder, from Kolhapur, is a full-time seeker of Sanatan Sanstha and we are sure that he is innocent. The Police have purposefully arrested him, by going through 2 crore call data records and searching only the phone number of Sanatan’s seeker, due to pressure from the anti-Sanatan elements. Earlier, Dr. Dabholkar’s murder also sparked the inquiry of many seekers from Sanatan. Sanatan Sanstha has also faced similar criticism on earlier occasions. However, no output came out of these inquiries. Samir Gaikwad has been arrested on the basis of suspicion. Even the Police are stating that he is just a suspect. We are sure that the truth behind this will shine through soon.

The Police have hatched a conspiracy to implicate innocent Samir Gaikwad. The manner in which Samir was arrested is highly suspicious. Before anybody is arrested, the Police have to prepare papers seeking his remand, which may take a few hours. Samir was arrested early in the morning and produced before the Court immediately thereafter. This means the remand papers were prepared well in advance. This points towards a conspiracy. The Police needs to inform the family of arrested person immediately after the arrest. However, the Police informed Gaikwad’s family after a few hours. This is a serious matter and raises questions about the way police have acted in this matter.

HJS | Mumbai | Sept 18, 2015::  Sanatan’s seeker Shri. Samir Gaikwad was arrested by police on previous night but it was shown on record that he was arrested on the following day, early morning at 4.30 a.m. He was directly presented in Court so as to prevent him from getting any legal aid. Two of his brothers-in-law are missing. Police are not ready to even take down complaint about the same. All this sequence of events is most despicable, stated Dr. Uday Dhuri, Mumbai Coordinator of HJS while he firmly expressed his views in a program held on ‘Mi Marathi’ news channel at 9.00 p.m. on 16th September under ‘Point Blank’. A discussion program was held on this channel on the topic ‘Will ban be imposed on Sanatan at least now ?’The other participants of the program were ANiS activist Vandana Shinde, Prakash Reddy – Communist Party and Atul Londhe of NCP. The program was hosted by Chief Editor of the channel, Ravindra Ambekar.

1. Today, there is pressure on police. If you ask who could be pressurizing them; it could be by communists. It should be noted. It is a clear ploy against Sanatan Sanstha.

2. Rohini Salian accused the Government that instructions were given to take a mild stand against Hindutvavaids. We have nothing to say about Salian or about such accusation. But it will be subject of research that how many of today’s advocates speak truth.

3. It is wrong to ask what goes on at Sanatan’s ashram. Many Saints, Jagatguru Shankaracharya, leaders, journalists and elected representatives have visited Sanatan’s ashrams. Police have found nothing wrong despite many inquiries conducted by them so far. If Atul Londhe has any doubts, he should visit the ashram. We extend invitation to him.

4. (To program-host) you first try to understand what counter-terrorism is; before you ask such question. Communists killed 250 RSS members in Kerala for gaining power which is called counter-terrorism. Now, what kind of awareness Dr. Narendra Dabholkar and Pansare with same ideologies were creating, needs to be investigated.

‘Branding Hindutvavadis as terrorists is hollow and baseless accusation !’ 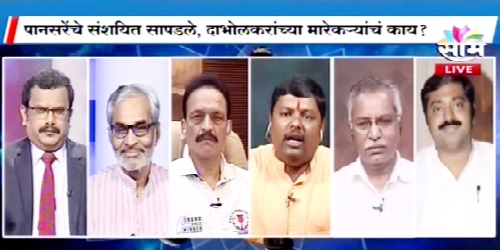 HJS | Mumbai | Sept 18, 2015:: ‘This program held by SAAM channel has title as ‘Hindutvavadi or Dahashatvadi (terrorist) ?’ and I strongly object to it.Sanatan Sanstha’s Shri. Samir Gaikwad has been taken into custody only as a suspect but it is not stated by police that he was involved in the murder of Comrade Pansare. Even then, multi-media have undertaken a drive against Sanatan. If one person is arrested as a suspect, calling all Hindutvavadi organizations as terrorists is baseless futile allegation.’ The above views were expressed by Shri. Sunil Ghanavat, Maharashtra State Coordinator of Hindu Janajagruti Samiti (HJS) on ‘SAAM’ TV channel during a program called ‘Awaz Mahaarashtra cha’ held at 8.00 p.m. on 16th September.

The other participants of the discussion program were BJP MLA Shri. Ram Kadam, Congress MLA- Bhai Jagtap, Vilas Ranasube of Communist Party and socialist,  Kumar Saptarshi. Sanjay Awate, the host of the program, however, unnecessarily indulged in lot of mud-slinging against Hindutvavadi organizations and instead of listening to opinions of invited dignitaries, continued to spit venom against Hindus. MLA Shri. Ram Kadam said that action would be taken as per law but till findings of inquiry are not brought forth; there should be no allegations.

1. Police have hatched a plot against Sanatan by arresting Shri. Samir Gaikwad. The procedure adopted for his arrest is quite suspicious.

2. How have communists found now that Hindutvavadis are terrorists ?

3. Communist leader K. Mani had declared in a public program that 250 RSS members were killed by his party for political gains. How do such communists have right to call Hindutvavadis as terrorists ?

5. All write ups in ‘Sanatan Prabhat’ are published by following all rules and regulations. Such writings give perspectives to society towards issues related to protection of nation and Dharma; Dharmashikshan is imparted; thoughts against Hindus are refuted based on principles and all this is published, so one can go through or study it anytime.

6. Any kind of killing is wrong; but tomorrow, when Shri. Samir Gaikwad is released, what are you going to do? Inquiries have been conducted into many seekers even earlier and they have been later released.