Kasuri, the writer of ‘Neither a Hawk – Nor a Dove’ was one of Kargil Conspirators. Why BJP gave him VISA?

The writer of ‘Neither a Hawk – Nor a Dove’ Kasuri was one of the Kargil Conspirators…..

The BJP led NDA Govt. is fully aware of the daily killings of Indian soldiers in Kashmir, yet Visa was being given to a Kargil conspirator, Why ? 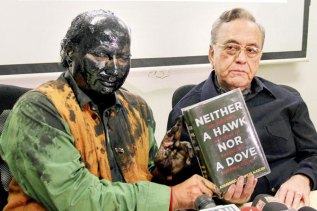 GSK Menon | HENB | New Delhi | Oct 17, 2015::  See the concerted attacks launched so discreetly and quietly by the Congress. 10 to 20 unknown forgotten writers were coaxed to return their awards and this was blown up spectacularly to become a national ruckus, Despite the stray killings here and there, which is technically and legally a law and order subject, hence within the jurisdiction of the State government, was completely upturned and the Modi led government had to face the flak and face the brickbats. Media and these handful of relatively unknown writers successfully cornered the Central government. Guerrilla warfare by the Congress was at its best.

The Beef Controversy has again caught the BJP government on the wrong foot. Again, a purely State government subject, became a law and order issue, strategically, media and Congress politicians teamed up to stun the Central government. The issue shamed India internationally. Many countries have food restrictions and prohibitions. In all Muslim countries, Pork is completely banned, nobody is making an issue about it. Go to any Muslim locality, Dogs cannot be seen, most of them are poisoned to death as Islam considers them as IMPURE. Nobody has any complaint whatsoever. On a holy day whether of the Hindus or the Jains and Buddhists, there is a concerted attack on ban on killings, Constitution, freedom, all sorts of asinine arguments are unleashed in the media to browbeat the vast majority into obeying the brutish tastes of certain foreign religions. BJP could not tackle this simple issue. It earned a bad name and ridicule throughout the world.

The Sudheendra Kulkarni blackening episode, disintegrated into a war between two allies, the BJP and the Shiv Sena. Why was Visa granted to the Pakistanis ? The Central government is fully aware of the daily killings of Indian soldiers in Kashmir, concerted and well planned terror attacks in Kashmir. Not a day goes without the Media carrying reports of likely terror attacks in key cities. Yet Visa was given to a Kargil conspirator, why ? The whole episode has created a bad name for the BJP government.

Price rise is going up like a rocket. The BJP is again cutting a sorry figure as its Ministers are foolishly going around the country claiming that they have given full powers to the State governments to tackle the problem. The people are not demanding Pizzas and Hamburgers but just Onions and Dal. If the government cannot handle issues skillfully, it needs to first send its legislators and bureaucrats for skill training under the Pradhan Mantri Kaushal Vikas Yojana ! It is pathetic if silly issues are twisted and made into shameful international issues. The Congress has silently and effectively been organizing such potent attacks leaving the BJP reeling throughout.

The Christian hand can clearly be seen. Only they are capable of organizing, blowing up events to gigantic proportions. Remember the fake nun rape racket, now the Adoption Law is being woven into another issue. Conversion gangs are making it into another contentious issue by feeding stories in the Media everyday, the Missionaries of Charity leading the assault. This particular organization is notorious for its rigid conversion agenda. The Government should nip it in the bud itself.

The Congress has been quietly and slyly creating a wave of bad name for the BJP. All these issues will snowball into major election issues in 2019. Congress is quietly building up its arsenal BJP should beware.

One comment on “Kasuri, the writer of ‘Neither a Hawk – Nor a Dove’ was one of Kargil Conspirators. Why BJP gave him VISA?”