Paris Attack: We should declare a final offensive against Islamic State. 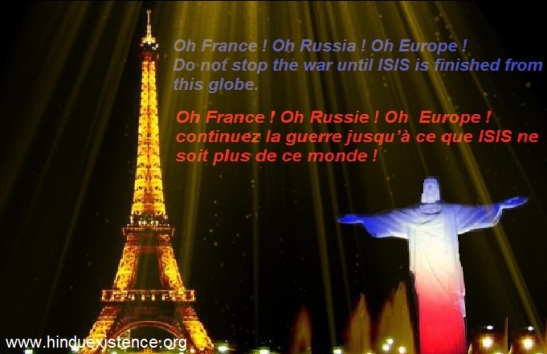 Oh France, Oh Russia, Oh Europe! Do not stop the war against Jihad until ISIS is finished from this globe. The rest of the non-Muslim world must join it.

HENB | New Delhi | Nov 14, 2015:: They have taken the responsibility. Islamic State says Friday Paris killings (on Nov 13) were response to Syria strikes. CNN reports, ‘At least 153 killed in gunfire and blasts‘ in a very planned way and they followed the Quranic doctrines to establish an Islamic peace in this world.

Some of the brutes with Kalashnikov, IED and suicide belts gunned down or blasted themselves. Some of them arrested from France and Belgium as operatives or masterminds. But facts remain that all of them are Islamic.

No scope they left for us to be misguided enough for realising the dreadful face of this Islam so ugly,  so barbaric. This is not just an attack in Paris or on the French People. Obviously, it is an attack on the Humanity and the Civilization. I find no need of headcount. How many Christians, Hindus, Buddhist, Jews, atheists or even may be some Muslims died in this Islamic mayhem is not a factor at all. It is to understand here how much they can act like beasts to kill ignorant and common people in cafe, playground, theatre hall or restaurants, only to achieve the goal of Pan Islam or the ISIS Khilafat as they claim.

The spill of blood is not splashing over the lanes of Paris. Can’t you see  how it is flowing through India, Germany, Britain, Japan, Israel, China, East, West, South, North and every corners of the world, where they get a chance to access the Jihad in Islam. If we do want to live in a non-Islamic peace unlike Paris, we have to think otherwise.

In 2008, I was in Pune on that day of 26/11 terrorist attack in Mumbai. Last night I got the news of 13/11 Paris attack in Delhi. Both the visuals were first available to me through television and internet. I had the same chilling sensations for the both Islamic attacks, the same firing of kalashnikov, same IED blasts, same pairing of two Jihads in populated places, simultaneous attacks in different places and target for maximum casualties. It proves that they have worked out seriously for a sustainable Jihad. But, we are not serious to stop this Jihad at all. If, we would be so serious, how can this Jihadi operation be happened in same Paris within so short spell after Charlie Hebdo attack on January 7, this year. Actually we like very much to forget action against Radical Islam and fly with easy Emotions for Muslims.

There is a little difference in 26/11 attacks in Mumbai and the 13/11 attacks in Paris, that is the attackers in Mumbai came from a Islamic State of Pakistan and now Paris attackers from Syria belong to Islamic State of Syria and Levant. But, the great similarity of these two cases is that the attackers are bloodthirsty and Jihadi without any confusion. Even then, we are confused whether we should react with this Jihad or not for the sake of the future existence of this civil society.

Being so civilized in our society, we possess so many attributes like ‘tolerance’, ‘kindness’, ‘human rights’, ‘permissiveness’ and so on. But, mind it all these are vices and sins if we show tolerance for the intolerants, kindness to the brutes, human rights to the joy killers and permissiveness to the fundamentalism. We must rethink anything when it is to be dealt with the Radical Islam.

In the name of human rights, and refugee welfare we have indulged them in Europe. And the huge Muslim refugees entered in Europe have successfully won the war of Land Jihad. Now, the time has come to Europe to see many 13/11 Paris in any alternative day!  Who can assure me that these 90% Muslims refugees in Europe have not the share of 10% Islamic Jihadis at minimum estimation? To avoid such Islamic offensive like Paris in Europe, the people of Europe must decide to drive out the last refugees from their land for safety and security reasons. Who are telling the matter of damn Humanity, please tell them, security of citizens of any country is more vital that showing any humanity for the suspected intruders. Check again, what is the real version of humanity as they think for the non-Muslims all along.

Today, I had a walk through Jama Masjid area and adjacent Muslim vicinities of Delhi to judge the repercussion on them after 13/11 Paris brutality. I found nobody to repent, condemn or retaliate.  Things are very natural as a curse of Allah upon the Kaffirs! I heard the same version of ISIS from an auto-rickshaw driver, Akhtar in Delhi who even not gone through any ISIS press note or video clippings. Akhtar was telling me that next blast and attack will be happened in Moscow and ‘France is a sinner by attacking ISIS and it is the curse of Allah on them’.  I don’t know how many Muslims can differ with Akhter, if there is a portion against it, they are also vulnerable mainly as very less in number.

In this critical juncture of a middle way of war against ISIS as started jointly by France, Russia, UK, USA, Israel and obviously the Muslims against ISIS as Kurds;  the rest big stakeholders like India, China, Japan, Germany, Australia cannot stay out of this war for the cleansing of Islamic Terrorism.

To avoid the repetition of  26/11 – Mumbai, 13/11 – Paris or 9/11 – NYC, the non-Islamic force must start final assault on ISIS and other Islamic outfits against Human Society.

This offensive in the warfield should be perpetuated in our civil society by calling a spade as a spade. Even sharing a cup of tea with a Muslim is not good, if that Muslim is not against ISIS and Jihad. In our permissive society we are allowing Adhan, Halal, Sharia, Burka, Madrasa, Mosques everything and by this way we are giving easy access to perpetuate a Jihad in our door-steps.

Be cautious! Oh France, Oh Russia, Oh Europe! Please make it an all out war against Islamic brutality. Do not stop the war until ISIS is finished from this globe. The rest of the non-Muslim world must join this war against Jihad.

One comment on “Paris Attack: We should declare a final offensive against Islamic State.”

This entry was posted on November 14, 2015 by hinduexistence in ANTI JIHAD, Global Jihad, Islamic Conspiracy Against Peace and Humanity, Islamic Menace, Islamic Terrorism, Save Humanity, Save Humanity from the attack of Islam, Say No to Bloody Jihad, Say no to Halal, Say No to Islam, Say No To Jihad, SAY NO TO RADICAL ISLAM, Say No to Sharia, Stop Jihad everywhere, World Jihad and Terrorism, World under Islamic Aggression, World under the attack of Islam and tagged 13/11 ISIS attack in Paris, 26/11 terrorist attack in Mumbai, Adhan, At least 153 killed in gunfire and blasts in Paris, Burka, Do not stop the war against Jihad until ISIS is finished from this globe, Friday Paris killings (on Nov 13), Halal, ISIS Khilafat, Islamic brutality, Madrasa, Mosques, Pan Islam, Paris Attack 13/11, Sharia, We should declare a final offensive against Islamic State.