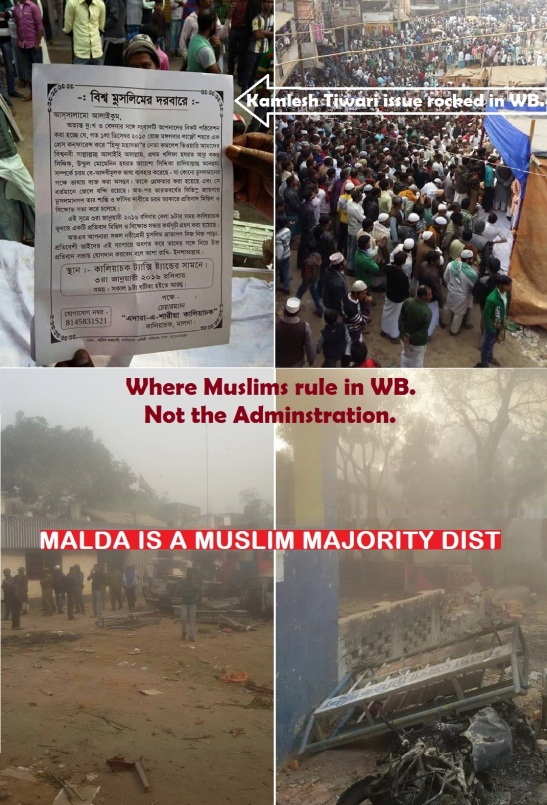 HENB | Malda | Jan 3, 2016:: In their own style of maintaining peace, a Jihadi mob torched the Kaliachak police station, attacked officers there, damaged the BDO office, set ablaze nearly 20 vehicles stranded on NH-34 and squatted on the railway tracks for hours on Sunday. Police had to open fire and it took them six hours to bring the situation under control.

A protest meeting (convened by one Edara-e-Sharia-Kaliachak) was to be held on Sunday at Kaliachak against self-proclaimed Hindu activist Kamlesh Tiwari’s recent speech on Muhammad as ‘gay’. The NH-34 was blocked by thousands pouring in to the meeting venue. According to a source, there was a rumour that a BSF vehicle was allowed to go after two jawans ‘opened fire injuring two’.

Soon, rallyists turned violent and ransacked an NBSTC bus that was passing through the area. Later, the mob attacked the BDO office at Kaliachak-I. Thousands went to Khaltipur railway station and squatted on the tracks. When police reached, a clash broke out. Soon, the mob attacked Kaliachak police station.

Bombs were reportedly hurled at will. Cops on duty had to fire blank shots. But this angered the mob and thousands of them forcefully entered the police station and set the police barrack on fire. Police records and files were also put on fire.  Inspector in charge Subhabrata Ghosh and others were injured. Scared policemen allegedly scampered away. Three ASIs Ram Saha, Debdulal Sarkar, S. Bhowmik and 4 Civic police were  injured while 10-12 police vehicles were damaged. 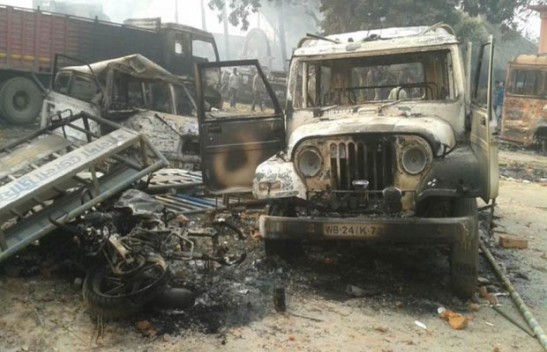 YES! THESE ARE POLICE VEHICLES BURNT BY THE KALIACHAK JIHADIS!! BUT WHY THESE ARE NOT PUBLISHED BY BENGAL PRESSTITUTES???

Police fired 40 rounds in blank without yielding any result. But, S.P.(Malda) refused to give permission to fire on the attacking Muslim mob.

It is also reported that Shani-temple, Durga Temple and few other Hindu temples have been attacked, desecrated, damaged at Baliadanga and other places.

To control the situation CrPc 144 was imposed in the disturbed areas and heavy contingent of police force reached Kaliachak from Malda Police HQ. Rapid Action Force was also deployed.

With this horrific incident Hindus (30% at Kaliachak) in Malda are feeling utterly helpless.

Mainstream Bengal media and the National hook-ups are suppressing  this mayhem against Hindus. It is their way to maintain Communal peace & harmony.

Bengal CM Mamata Banerjee’s administration has totally surrendered to the Muslim communal forces. The reckless & shameless Muslim appeasement in West Bengal for ‘Muslim vote’ is responsible for such upsurge of Islamic fundamentalism in the state.

Reportedly Two FIR lodged by the State but nobody arrested yet. Situation controlled for the time being, but sensing further attack on the minority Hindus in another loop.

It is a big question to Malda minority Hindus that how they will survive with safety and security while police and BSF itself failed to protect themselves.

Some alternative media told that the Jihadi mob was of 2,5 Lakh strength, they shot a RSS activist near Kaliachak police station and Police ran away police stations for hours.

A police constable (requested repeatedly not to disclose his name) told this reporter, “the Police Minister, who is the Chief Minister also of West Bengal is playing the lives of police personnel on her whim. She is telling us to be soft on Muslims and Muslims  are trying to take police power in their hands. In one or two years Muslims will run this state, not the administration or police”.

“Like other secular political parties, state BJP, under newly elected WB President Dilip Ghosh, is also ignoring the Hindu issues in the state”, saying some people at Kaliachak. But, when asked, Ghosh  told HENB over telephone, ” We are fully aware of the facts; we are in  touch with the victim persons and trying to take action properly”.