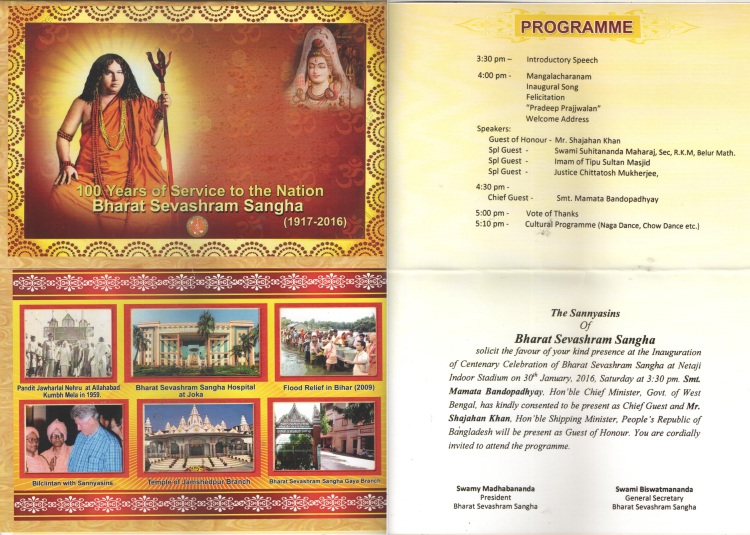 Why Most Communal Nurar Rehman Barkati, Imam of Tipu Sultan Mosque, Kolkata is included in Bharat Sevashram Sangha Centenary Celebration? Why Sangha is put under Islamic influence through TMC politics??

Apart from its high efforts of rendering relief works in the period all types of natural calamities and disasters, conducting services in various pilgrimages and continuing various educational, health and hygiene rural and urban developments, rehabilitation programmes for the old, infirm and people in special need and care, the Sangha is associated with the Hindu organisation through its “Hindu Milan Mandir Movement” networking throughout the country. Bharat Sevashram Sangha is also is know as a pioneering Hindu Organistion with a celibate monk order in the country and abroad. It is very much important to note that such an organisation is going to complete its 100 years of Nation building activities with best sincerity and continuously.

This year 2016 is marked as the pre-centenary year by the Sangha itself with undertaking multifarious social, cultural. educational programmes throughout the year before entering its centenary year in 2017.

But, sorry to say that it is a thundering news that the most communal face of West Bengal Nurar Rehaman Barkati, the infamous Imam of Tipu Sultan is included in its opening programme for the centenary celebration to be held on 30 January 2016 at Netaji Indoor Stadium, Kolkata.

Through its invitation card as sent to us from a source (not BSS), it is known that the programme will be attended by WB Chief Minister, Mamata Bandopadhyay as Chief Guest. The other dignitaries are Sajahan Khan, Minister of Bangladesh (Shipping) as Guest of Honour; Swami Suhitanandaji Maharaj, Secretary, Ramakrishna Mission, Belur Math as Special Guest; Justice Chittotosh Mukherjee as Special Guest and and and none other than “Imam of Tipu Sultan Masjid” as also special guest.  The invitation letter is issued by Sangha President Swami Madhavanandaji and Sangha General Secretary Swami Biswatmanandaji (+91 9477201865).

Interesting enough, when a minister of a foreign country is invited in the programme, no central minister or any dignitaries from the ruling central Govt is not included.

However, the inclusion of a communal person like Imam of Tipu Sultan Masjid in the Bharat Sevashram Sangha programme has sparked a row in the level of Hindu organisations.

Most of them are astonished after hearing this news that the fatwa maker for Taslima Nasrin’s execution, organizer of funeral/condolence prayer for Osama Bin Laden in Kolkata, the attacker of Calcutta high Court on banning cow slaughter and illegal use of microphones in mosques, i.e. infamous and most communal leader Imam Barkati of Tipu sultan Masque is included in a programme of Bharat Sevashram Sangha established by Acharya Srimat Swami Pranavanandaji Maharaj.

Ramesh Shinde (+91 9987966666), the national spokesperson of Hindu Janajagruti Samiti told that the indication is worst than anything as Hindu sannyasins are also trapped by Mamata Banerjee for her political gain. “I doubt whether the monks of Bharat Sevashram Sangha is willfully inviting Barkati or there is some hidden story behind it”, Shinde added.

Jishnu Basu (+91 9433039214), the general secretary of RSS, South Bengal, told HENB, “It is unbelievable that Barkati like communal person is also forced to be included in the Bharat Sevashram Sangha function. Sangha is known for its genuine Hindu texture and its inclination to protect persecuted Hindus in the society. Such inclusion of communal person in BSS periphery is nothing but a curse to the Hindu society”.

From a source it is divulged that Mamata Banerjee is trying to use the platform of Bharat Sevashram Sangha in Netaji Indoor Stadium to woo the Hindu voters of Bengal in the coming assemble election in WB in the month of May or June in this year.

In a process to influence the Hindu voters who are very much dejected with the communal situation in Bengal along with Muslim appeasement by the state, Mamata Banerjee is now interested to attend the meeting with the Hindu monks of Bharat Sevashram Sangha and Ramakrishna Mission in Netaji Indoor Stadium on Jan 30. Till now, Mamata Banerjee was only seen in the public meeting of Communal Jammate-Ulema-Hind,  Furfura Sharif or in the Red Road Eid congregation in her preferable Muslim attire. Even she dared to pull the ISKCON Chariot in Kolkata Rathyatra in the same Islamic hijab style.

The programme may lead to a chaotic one if Mamata Banerjee try to pose a balance in the programme by uttering her lovable Islamic phrases like Aadab, Inshallah, Khuda Hafeez in the said programme with any show and reading out any oath of harmony with a communal person like Imam Barkati.

Some 10 other Muslim Imams and a delegations of Christian and others also may be  dragged in the dais by the ruling political force to paint the programme is a very secular in nature. Though the communal politics of Mamata Banerjee is wide open to all, this endeavor will be a catastrophe indeed.

No condemnation is sufficient for this filthy effort of Mamata Banerjee to introduce Communal Barkati in the programme of Bharat Sevashram Sangha under a realm of ‘Political Jihad’. She has no power to send or to accompany BSS or RKM Monks to the dais of Jaamat or Furfura. But she is dedicated to help for the preaching of radical Islam from the dais of a Hindu organisation. It’s a shame. It is very much shameful indeed.

One comment on “Most communal Imam of Tipu Sultan Masjid to attend Bharat Sevashram Sangha function. Who put Sangha under Islamic pressure!?”