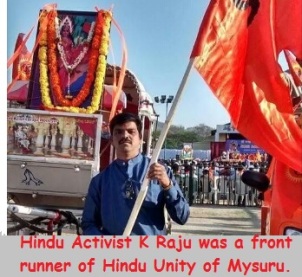 HENB | Mysuru | March 14, 2016:: A Sri Ram Sene activist  and ex-VHP worker K Raju, mostly known as ‘RSS Raju’, was brutally murdered in broad daylight light yesterday. Raju was standing in a tea shop near the Netaji circle when a group of bikers attacked him with lethal weapons. Following the incident, the BJP city unit has called for a bandh on Monday to protest the murder.

BJP is observing bandh in Mysuru demanding the arrest of assailants. Raju was in the forefront against the illegal construction of a mosque in his native area of Kyatamaranahalli.

Suspected Jihadi outfits influenced by IS may be behind  the scene.

Raju was attacked with machetes and other lethal weapons by a gang of four when he was drinking tea in a roadside stall with his friend Jaikumar. He was rushed to KR Hospital were he was declared brought dead.

As the news of Raju’s murder spread, hundreds of workers of BJP, RSS, Sri Ram Sene and other right-wing organisations thronged the KR Hospital mortuary. The BJP, Sri Ram Sene, Bajrang Dal and the Vishwa Hindu Parishad staged protests and shouted slogans calling for arrest of the attackers.

The City Police has imposed prohibitory orders under Section 144 of the (Code of Criminal Procedure) CrPC after popular Hindu activist Raju was murdered on M.G. Road in Udayagiri Police station limits on Sunday.

Raju was instrumental in building a Ganesha temple and was also organising Hindu unity fronts in Udayagiri, NR Mohalla and Kytharamanahalli. BJP city unit president Maruthi Rao Pawar said the police should take the case seriously and nab the assailants.  He said any delay in arresting culprits would lead to tension and give room for suspicion.

Maruthi Rao Pawar added that the police officers have assured him of forming four teams to probe the murder. Pawar said the police should not succumb to political pressure and keep a vigil on a few local leaders who may protect the assailants. Meanwhile, Police Commissioner B Dayanad and other top officials  rushed to step up police bundobust in Kythamaranahalli, Udayagiri and other communally sensitive localities in the city.  The police stepped up vigil across the city to see that peace is maintained.

The police officers decided to look into CCTV footages of a nearby bank and ATM to zero in on the culprits.  The victim’s friend Jaikumar will be questioned to come out with a sketch of the accused involved in the crime.

Hindu Existence Forum and all the Hindu organisations across the country have condemned the brutal murder of Raju and demanded speedy arrest of the culprits.

Frequent murder of Hindu leaders and activists in Kerala, Tamil Nadu, Karnataka by the Marxists and Muslim goons mark an anti-Hindu upsurge in the southern states of  India.