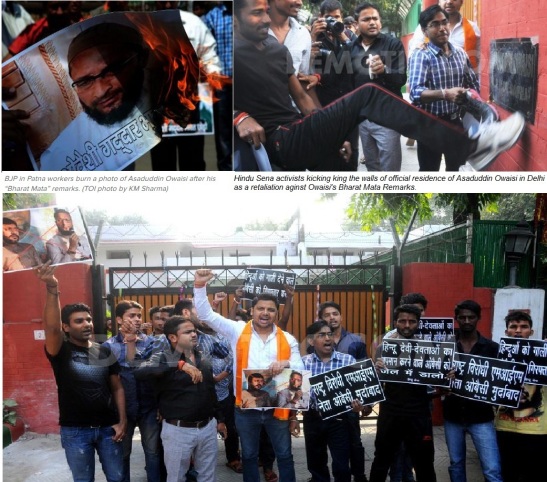 PTI | Jammu | Mar 16, 2016:: Seeking action against AIMIM leader Asaduddin Owaisi for refusing to chant “Bharat Mata ki Jai”, the RSS on Wednesday said those who do not consider India as their “motherland” should leave the country.

“He (Owaisi) is making such unwarranted statements. If somebody does not consider our country as motherland, he is most welcome to go away from this country and go wherever he likes,” Rashtriya Swayamsevak Sangh’s Jammu & Kashmir leader Brigadier Suchet Singh said here.

RSS’s reaction comes in the wake of Owaisi’s recent remarks that he won’t chant “Bharat Mata ki Jai” even if a knife was put to his throat.

Singh said it was “unfortunate” that such people were elected to Parliament.

Asked whether RSS wanted action against Owaisi, he said action must be taken and people are there to think about this.

“In fact, we can only suggest that anti-national activities by anti-national people must be identified and stern action taken against them,” he added.

PTI | New Delhi | March 16, 2016:: Posters branding AIMIM leader Asaduddin Owaisi as a “traitor” and charging him with causing “insult of Bharat Mata” appeared at the entrance of his official residence on Ashoka Road on Wednesday. The posters were put up allegedly by Hindu Sena activists at around 7 pm. The posters were removed immediately and police began a probe.

“The posters were fixed by our activists as they were angered by Owaisi openly saying that he will not say ‘Vande Mataram’. There should not be any place for traitors in the country,” said Vishnu Gupta, president of Hindu Sena.

Rejecting RSS chief Mohan Bhagwat’s suggestion for infusing patriotism in the young generation, AIMIM leader Asaduddin Owaisi had said he would not chant ‘Bharat Mata ki Jai’ even if a knife is put to his throat. “I don’t chant that slogan. What are you going to do, Bhagwat sahab?” the Lok Sabha MP from Hyderabad had said at a rally in Udgir tehsil of Latur district in Maharashtra on February 13.

Police said information has been received about the posters and they are looking into the matter.