Modi is repeating the same mistake that former Prime Minister Jawahar Lal Nehru made in 1962. 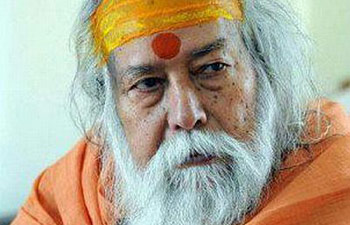 N Santosh | HENB | Bhopal | Sept 20, 2016::  Veteran Shankaracharya Swami Swaroopanand Saraswati of Dwarka and Sharda Peeth said on Monday Prime Minister Narendra Modi should stop “roaming here and there” and prepare people of the country for a war (with Pakistan).

The statements came a day after a terror attack on an army camp at Uri in Jammu and Kashmir killed 18 soldiers. Home minister Rajnath Singh pointed a finger at Pakistan for its “continued and direct support” to terror groups but Pakistan dismissed the accusation.

The Shankaracharya said Modi was repeating the same mistake that former Prime Minister Jawahar Lal Nehru made in 1962. Nehru’s mistake of trusting China was the main reason for the country’s humiliating defeat in the war.

“During the war with China, people gave so much money on their own to the government. Tell me, if the government needs money for a war right now, how many people will be in a position to shell out…” he said.

He said soldiers were dying on a regular basis, and what could they do when they were repeatedly told to restrain themselves if they are pelted with stones or attacked.

“Modi was roaming here and there in the world for becoming a world leader, but people here were suffering under Pakistani attacks or in many difficulties– be it farmers who were committing suicides or traders and common people who were struggling with price hike, or people and children are dying in starvation or malnutrition” he said.

The Shankaracharya also raised questions over Modi’s two years as a PM.

“What has he (Modi) done in these two years? Gau hatya (cow slaughter) has not been stopped. Ganga river still flows unclean. Corruption continues despite his saying ‘Na Khawoonga, na khaney doonga (won’t allow corruption )’. He took no initiative for Ram Temple at Ayodhya by approaching the Hindu saints. I am an optimistic person. But he is repeating the mistakes of Congress and Nehru.”

It is not the first time Shankaracharya criticised Modi. In May, he had questioned the Prime Minister’s focus on building toilets under the Swachh Bharat Abhiyan at a time the country was facing drought.

Instead of focusing on building toilets, Shankaracharya has said, the Modi government should first ensure people have drinking water.

In December last, he questioned Modi for terming “India as a country of Lord Buddha and Mahatma Gandhi” during his visit to the United Kingdom, stressing why the PM can’t say India was the land of Rama-Krishna at international forums.

Shankaracharya criticised Modi for his transformation from a Hinduwadi to a Secular politician. “He is exploiting the Hindu sentiments. Coming to power on the base of Hindu votes, Modi is disappointing the Hindus time and gain”, the Shankaracharya said.

Swaroopanand Saraswati said political parties cannot build Ram temple at Ayodhya in election-bound Uttar Pradesh. It is the saints and religious leaders who can build the temple once the court allows, not the BJP or the Congress, he said.

The Shankaracharya announced that a massive Sudarshan Temple would be constructed in Shirdi “to counter the cult of Sai” Baba.

He said the temple would be dedicated to Lord Vishnu and would have a Sudarshan chakra at its top. In October last year, he released a controversial poster showing Lord Hanuman chasing away Sai Baba. He had said Hindu sanatan dharma was being polluted by Sai Baba, adding: “in Hinduism when we want to chase away any ghost, we invoke Lord Hanuman”.

__Input from The Hindu.