Rally in Front of Trump Tower in NY to Save Bangladeshi Hindus from Islamic Persecution.

Bangladeshi Hindus in US seek Trump’s intervention to save non-Muslims in BD.

Rediff | New York | November 28, 2016:: In the wake of atrocities laid on their community, few Hindu Bangladesh nationals rallied in front of Trump Tower in New York demanding the intervention of President-elect Donald Trump to save the non-Muslims in their country.

The rally was taken out by the Hindus from Bangladesh origin demanding that President-elect Trump should save the non-Muslim populations there from the racial hands of militant Islam.

“We had voted for Mr Trump and now we want to appraise him that the Hindus and other religious minorities in Bangladesh are routinely persecuted with no end of it in sight,” organiser Sitangshu Guha said.

“We wish President Trump do something for the sake of humanity while in office,” he added.

A memorandum was sent to the Trump team which details minority persecution including the recent Brahmanbaria and Santal killings. 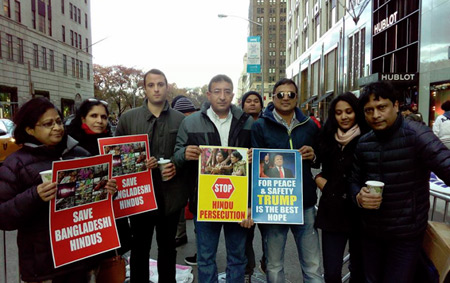 Postscript by HinduExistence: On 27th Nov 2016, many Human Rights and Hindu organisations of New York and New Jersey have participated in the rally in front of Trump Tower to show their solidarity with the persecuted Hindus and other minorities in Islamic Bangladesh in a spate of Jihadi excesses there.

The members of Reunion of Puja Committees (সম্মিলিত পূজা পুণর্মিলনী), US unit of BD-Hindu-Bauddha-Christian-Unity-Council (বাংলাদেশ-হিন্দু-বৌদ্ধ-খ্রিষ্টান-ঐক্য-পরিষদের যুক্তরাষ্ট্র শাখা), Justice for Hindus, bangladesh Puja Celebration Council (বাংলাদেশ পূজা উদযাপন পরিষদ), Jamaica Hindu Community and other Hindu organisations participated in the rally. All of the participants urged US President elect Mr Trump to intervene in the matter of torture upon Hindus and other minorities in Bangladesh.

From a source it is reported that Mr. Mendi Safadi, a Jewish interlocutor on Bangladesh-Israel relationship went to the rally at the last hour to convey his support on the cause of the minorities in BD. He also stood in the rally for sometimes holding a placard, “STOP HINDU PERSECUTION”.

The rally announced its next rally before White House on 11 th Dec, 2016 against the “Continuing Islamic Violence upon Minorities of Bangladesh”.