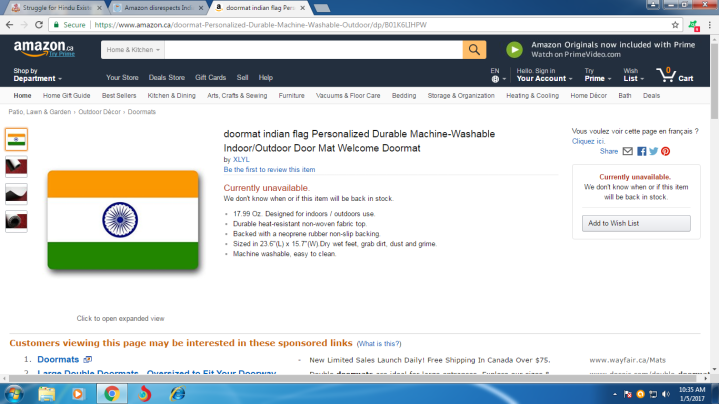 Harsh Dwivedi | HENB | New Delhi | Jan 5, 2017:: Again it its usual fashion of ‘don’t care’, Amazon just did the unthinkable by selling Indian flag doormats and disrespecting the national symbol of India. These personalised tri-coloured door mats were made available on the e-commerce website+ with ample pictures and description. The Indian flag has been a symbol of pride for us and is respected by every Indian, whether there are in India or settled abroad. However, this product listed on Amazon Canada caught our attention and immediately made us question the intention of both makers and the internet-based retail. The product which has an image of a rugged looking Indian flag is enough to make every patriot’s blood boil. Highly offensive in nature, the pictures will enrage everyone on the social media.

NOW ITS THE TIME TO ATTACK AMAZON INDIA OFFICES AND DELIVERY MEN EVERYWHERE IN INDIA AS AMAZON IS NOT TAKING OFF THE ” INDIAN FLAG DOORMAT” UNACCEPTABLE BY INDIANS. (Withdraw disputed Indian flag doormat within 24 hours. Your time starts from 11-30 am. Jan 5, 2016).

One fails to understand the lack of sensitivity on the product makers and Amazon Canada’s part to display this Indian flag doormat. It is widely known that Canada has major Indian-origin population. Such an act would face a severe backlash from the Indian community both living in Canada, in India and across the world. Despite the product being highly offending and for the right reasons, Amazon chose to go ahead with the sales. The product is currently unavailable, which makes us wonder if it is due to being out of stock or removed after the fear of potential adverse reactions.

Amazon previously came under the radar for selling door mats that bore the name of “Allah” which hurt the sentiments of Muslims all over the world. The e-commerce giant’s British hand was selling doormats with the words “Allah” embroidered on it in Arabic. Various Muslims took to Twitter to get these mats from Amazon by explaining how it is demeaning their religion and an insult to their eternal one. These mats were sold by manufacturers Dragon one and Trendy Mats. When complaints poured in, Amazon finally took these mats of their site and stopped their sale. Well, high time Amazon did their basic research on cultural studies and understood individual’s background.

In June 2016, the habitual offender Amazon was engaged on selling doormats with the pictures of Hindu deities+. Under the huge retaliation in various social media platforms by the enraged Hindus, the company withdrew their disputed products afterwards+.

Shri Shivaji Vatkar, National Coordinator of Rashtriya Hindu Andolan and veteran leader of Hindu Janjagruti Samiti told HENB, “we will start campaign immediately so as to stop abuse, disrespect and denigration of National Flag as per National Flag code”.