Modi Govt must stop illegal issuance of Fatwa in India. 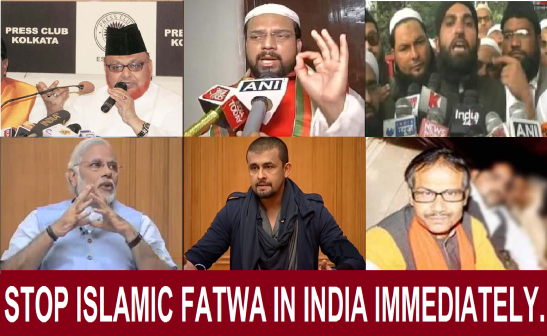 Fatwa is an Islamic matter, how these low educated fanatic Mullah clerics issue fatwa against Hindus?

Upananda Brahmachari | HENB | New Delhi | May 7, 2017:: The Popular Anti-Azan Twitterati Singer Sonu Nigam has urged the central government to take action against those who issue death threats in the form of “fatwa”.

Just in last month, Nigam got embroiled in a controversy over his tweets against use of loudspeaker at odd hours during azaan (Muslim call for prayer).

“I have full faith in God, who is omnipresent and all-pervading. But I don’t like this mentality, when any one issues fatwa against any other person, saying cut off his hair, kill him. There was a fatwa… for cutting off my head,” Sonu said on popular TV show “Aap Ki Adalat” as prepared for India TV telecast.

“In my view, the government must do something about this. We live in a civilized and democratic country. We are a republic. How can we allow such things like fatwa? I am also against lynching of people by Gau Rakshaks. I am totally against any violation of law or taking law unlawfully in public hands.

“I don’t like gundagardi (hooliganism) in any form. You can’t go in a group of 12 people and threaten a family in the name of religion. Such things should not happen in our country. We are all doing well, actually. We are doing very well these days. This is not a political statement, but I believe ‘Achhe din aa rahe hain’ (good days are coming),” he added.

Sonu also said that though he “sometimes did feel” like leaving India and settling in some other country, but finally he considered India as his home and the best place to settle in the earth.

The episode of “Aap Ki Adalat” featuring Nigam aired on Saturday (6th May) on India TV.

Interestingly, the Muslims regulated by radical clerics and fanatic Islamic organisations always bear the fatwas mostly go against the Indian Penal Code, 1860 (IPC) and The Code  of Criminal Procedure, 1973 (CrPC).

As such, the politically pampered Muslims take the advantages to take the chance of Sharia promulgation even through issuing fatwas for Muslims contravening the clauses of Indian Constitution.

Though the Fatwas are given to Muslim matters as Islamic menace, the Arab inclined fanatics dare to issue fatwas against the non-Muslims in India as a set trend now a days.

In December 2015, various Muslims orgs issued Fatwa against Hindu Mahasabha leader Kamlesh Tiwari for capital punishment for his claim that Muhammad was the ‘first homo-sexual’. One Bijnore Cleric then announced 5.1 million Indian rupee for beheading Tiwari.

In April, 2017, Syed Sha Atef Ali Al Quaderi, senior  member of West Bengal Minority United Council issued a fatwa against Sonu Nigam offering Rs 10 lakhs to save the head of Singer and to put a garland of old torn shoes around his neck for his ‘Azan twitters‘.

See, Fatwa is an Islamic matter, how these low educated fanatic Mullah clerics issue fatwa against Hindus? Are Muslims still the rulers of India to issue fatwas, run sharia courts, campaign for halal and cow slaughter and to vilify majority culture even attacking Bharat Mata (Mother India) and Vande Mataram (Salutation to Mother India). How, they dare to issue fatwa against Jana Gana Mana (National Anthem), Yoga and Surya Namaskar?

In the present context, Sonu Nigam’s appeal to stop such Fatwas through central ordinance is very important and most urgent.

Modi Govt must stop illegal issuance of Fatwa in India.