‘Our historians must give due respect to The Great Maharana Pratap’. 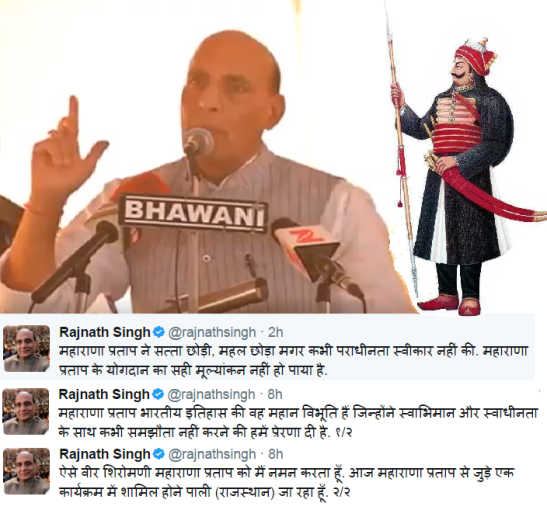 PTI | Jaipur | May 9, 2017::  Stating that Maharana Pratap did not get his due place in history, Union Home Minister Rajnath Singh today urged historians to re-evaulate the contribution of the Rajput warrior.

“I am surprised that historians called Akbar as great but not Pratap. What shortcoming did they notice in Pratap that he was not referred to as ‘the Great’,” Singh said.

Addressing a public gathering after unveiling Pratap’s statue on his 477th birth anniversary in Pali district of Rajasthan, Singh said the Mewar ruler was a true statesman.

He scarified his throne and leisure and fought for self respect, presenting an exemplary example of valour, he said. “I have no objection to Akbar being referred so but I would appeal to historians that a correct assessment of Pratap should be there in the history of the country,” Singh said.

The minister also paid tributes to leaders who took part in the first war of independence in 1857 and said Maharana Pratap and Shivaji had inspired them.

“Our historians made a huge mistake in not giving Maharana Pratap his due in Indian history and this error should be rectified,” he said.

The statue of Maharana Pratap was unveiled at village Kharokada in Pali district, 280 kms from here. 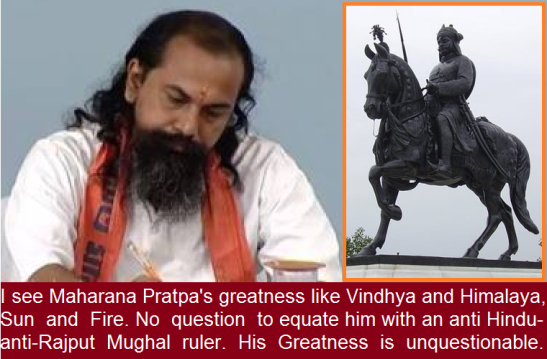 The Greatness of Maharana Pratap is above the stature of Akbar. How can a divider and destroyer of Rajput power be equaled with a Greatest Rajput Hero? ~ Upananda Brahmachari.

Sumedha Jaiswal | HENB | New Delhi | May 9, 2017:: Hailing the viewpoint of Indian Home Minister Rajnath Singh to research further about the greatest endeavor of Maharana Pratap to Rajput freedom in the History, the Hindu intellectual and Editor, Hindu Existence, Upananada Brahmachari criticized Mr Singh as he tried to put Akbar and Pratap in the same row of Greatness.

In a telephonic conversation from Haridwar, Brahmachari told HENB that it will be a great blunder make it equal ‘great’ with a spiritual, righteous and patriot Maharana Pratap with a lustful, conspirator and anti Hindu ruler like Akbar.

“As a ruler of foreign root, Akbar wanted to dispel the unity of patriotic force of Rajput and divided them to exercise his ruling power. Akbar exploited many Hindu girls and women in his harem and introduced a new cult like, Din-e-Ilahi to loosen the roots of Hindu Dharma in a very cunning way. How such a man Akbar can be equated with the Great Maharana Pratap?” Brahmachari said.

As the Indian History is based on ‘courtyard record keeping and self praising’ and stuffed with ‘Marxist analysis’ and ‘Secular rudiments’, the whole of Indian History must be re-written as it was initiated by Vinayak Damodar Savarkar in his great historical treatise, ‘The Six Glorious Epochs of Indian History’, Brahmachari opined.

“Maharana Pratap was Great undoubtedly. It is unquestionable.  So, I can’t go with Rajnath Singhji’s version – Why isn’t Maharana Pratap called ‘the Great’ like Akbar? I see Maharana Pratpa’s greatness like Vindhya and Himalaya, Sun and Fire. No question to equate it with an anti Hindu- anti-Rajput Mughal ruler. As the patriots of this land we must glorify and follow the path of Maharana Pratap and we have to expose the conspiracy of all Mughal and Muslim persecutors and rulers in our history”, Brahmachari added.

This entry was posted on May 9, 2017 by hinduexistence in Anti National, Anti-Hindu, Anti-Indian, Attack on Hindu Sentiments, Hindu Advocacy, Hindu History, Hindu Knowledge, Hindu Reality, Hindu Research and tagged Greatness of Maharana Pratap is above the stature of Akbar, Indian historians must give due respect to The Great Maharana Pratap, Maharana Pratap Jayanti, Rajnath Singh, Upananda Brahmachari, Why isn't Maharana Pratap called 'the Great' like Akbar.