Claiming its ownership Shia Board allows Ram Temple in Janmabhoomi, advocates making a Mosque in a Muslim area far from disputed site. 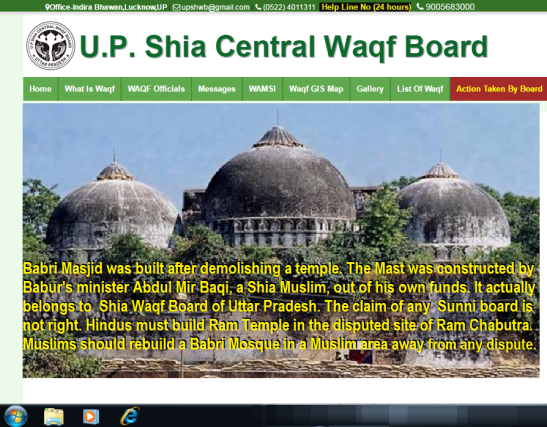 Shia board moves SC for ownership of Babri Masjid, claims ‘Babri Masjid was built after demolishing a temple’.

TNN | New Delhi | Aug 10, 2017:: Seventy-one years after losing a legal battle for ownership of Babri Masjid, Shia Waqf Board of Uttar Pradesh on Wednesday approached the Supreme Court, challenging a trial court order which had on March 30, 1946 declared the mosque as Sunni Waqf Board property.

The board has admitted in its petition that Babri Masjid was constructed after demolishing a temple on the site.

Read this story in Gujarati

With the SC to hear the dispute over Ram Janam Bhoomi-Babri Masjid on Friday, Shia Waqf Board pleaded to the court to decide its appeal along with other petitions.

A day after taking a stand that it was agreeable to shifting of the demolished mosque to bring about a closure to the vexed dispute, the board decided to revive its dispute with the Sunni Waqf Board by filing an appeal after more than seven decades.

In its appeal, filed through advocate M C Dhingra, the board contended the trial court committed a grave error in declaring Babri Masjid as Sunni Waqf property as the mosque was built by a Shia muslim.

Read this story in Marathi

Countering the prevalent perception that the mosque was built by Mughal emperor Babur, the board said it was actually constructed by his minister Abdul Mir Baqi, a Shia Muslim, out of his own funds. Babur was a Sunni Muslim.

“Even if Babur ordered for building a mosque, the Wakif is the one who actually creates Waqf by dedicating it to the God. The mosque was built by Baqi out of his funds. Babur stayed near Ayodhya only for 5-6 days whereas construction of mosque took more time (demolition of temple and building of mosque). The trial court failed to appreciate that merely ordering to build mosque does not make that person as Wakif. Babur might have ordered Baqi to build mosque but it was Baqi who chose the site and having demolished the temple got the mosque built,” the plea said.

The board alleged the mosque was being looked after by the Shia community even since it was constructed but the British government had erroneously included it amongst the Sunni Waqfs in 1944 and it had approached Faizabad civil court in 1945 which had dismissed its claim a year after. Challenging the findings of the trial court, the board said that inscription on the pulpit of the mosque elaborately described Baqi as its builder and the court made serious error in rejecting its claim. The two boards representing two groups of muslim community are all set to fight out their case in court as Shia board has already blamed its rival for opposing amicable settlement of Ram Janam Bhoomi-Babri Masjid row.

One comment on “Claiming its ownership Shia Board allows Ram Temple in Janmabhoomi, advocates making a Mosque in a Muslim area far from disputed site.”