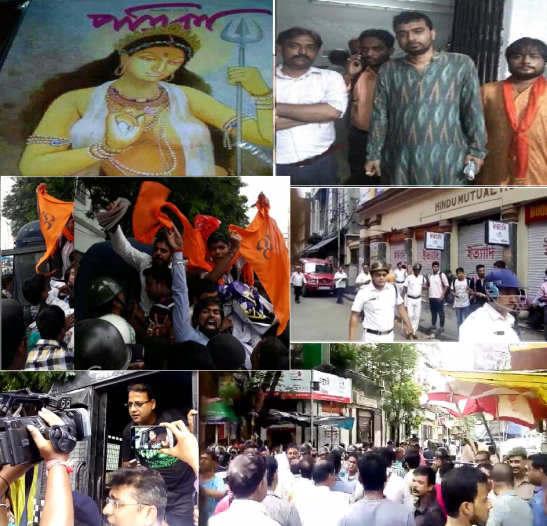 The notorious Anandabazar Group of Publication has published two pictures of Godess Durga in their Sharodiya issues (Annual Festival Number for Durga Puja in Bengali language) in a very bad light. To protest such vilification of Hindu deities, VHP, Bajrang Dal and Durga Vahini arranged a March to Gherao Ananda Bazar House in Central Kolkata.

A heavy contingent of Bowbazar PS cordoned the area so that the protesters cannot reach the ABP office. Police dispersed the protesters around ABP office at Chandni Chowk area and arrested  78 members of VHP, Bajrang Dal and Durga Vahini. From the spot, 62 men and 16 women were arrested, the Bowbazar PS source said.

Many of ABP outlets and Advt collection offices were seen closed apprehending a retaliation of Kolkata Hindus over the publication of obscene picturization of Goddess Durga in the cover page of ABP Groups ‘Sharodiya Patrika’ and ‘Sharodiya Anandabazar Patrika’.

Police arrested many of the protesters by identifying them with the mark of Tilak in their forehead. It is also alleged that police harassed common public for shouting ‘Jai Shri Ram’ to encourage the protesters. At a point of time police manhandled the protesters and canned abruptly to dispersed the mob.

VHP Media cell in charge  Sourish Mukherjee says, the VHP and its sister concerns will go for a big protest against the ABP Group and the culpable WB Govt for their stands to vilify and demean the Hindu sentiments in the state.

All the arrested persons were released by evening.

The movement of traffic and normal public life were disrupted due the police blockade in some streets and roads around Chandni Chowk, Central Avenue, Prafulla Sarkar street in Central Kolkata.

It is ironical, when a juvenile named Souvik Sarkar (17+) was arrested in Baduria by police and still languishing in a reformatory Home after posting a ‘objectionable pic of Kaba’ in his facebook timeline (from it the Basirhat communal flare up was occurred as believed), the criminal like ABP Group tycoon Aveek Sarkar is roaming free after his perpetration in a bare vilification of Hindu sentiments through his magazines under a protection of state.

VHP leveled WB CM Mamata Banerjee and Aveek Sarkar as birds of same feather in connection of demoralizing the Hindus in Bengal and hurting the Hindu sentiments at random.

A section of Civil Society today expressed their concern over Muslim appeasement and anti-Hindu policy of Mamata Banerjee Govt in West Bengal. Susmita Bhattacharia being the spokesperson of ‘Bangiyo Hindu Jagoran Mancho’ told HENB, “the two standards for Souvik Sarkar and Aveek Sarkar adopted by the state are the glaring example of CM Mamata Banerjee’s Muslim appeasement eying to minority vote bank politics. When Souvik Sarkar, a student of 17 years is put in custody for months together due to his ‘objectionable’ facebook posting; the Ananadabazar Godfather Aveek Sarkar is  being honored by Mamata Govt for his record for hurting Hindu sentiments repeatedly including the derogatory depiction of Mother Durga in ABP magazines”.