VHP to take the issue of 45 Vijayawada Temple demolitions nationwide, if not constructed properly. 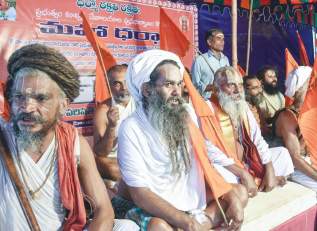 Sadhus from various parts of the country stage a protest in Vijayawada on Friday demanding rebuilding of temples which were demolished during Krishna Pushkarams | Pic. R V K RAO.

B Upendra Rao | HENB | Vijayawada | Aug 18, 2017:: Headed by Hindu Monks, Seers and Saints, the members of the Vishwa Hindu Parishad (VHP) and Hindu Dharma Parirakshana Samithi (HDPS) staged a protest here on Friday urging the State government to construct five of the 45 temples that were demolished in and around Vijayawada for Krishna Pushkralu.

VHP leaders alleged that though Chandrababu Naidu led TDP government in Andhra Pradesh had set up a five-men committee last year for rebuilding the temples+, nothing has happened till date. They warned to take the issue to the notice of BJP national president Amit Shah who is scheduled to visit the city on August 28 if no action is taken for the reconstruction of the dismantled temples by then.

According to VHP members, the demolished temples include the oldest Seethamma Vari Padalu, Rahu-Ketu temple, Vinayaka temple on the river belt of Krishna,  Swayambhu Ammavari temple at Bhavanipuram, Krishna temple, Bavaji matham. Saiva Kshetram Peetadhipathi Sri Siva Swamy sought to know why the government had targeted only Hindu temples in the name of executing development works for Krishna Pushkaralu.

Very unfortunately, in the name of pilgrimage welfare, extending facilities to them and free traffic flow in Krishna Pushkralu, the famous  Vinayaka temple on Canal Road or the Sri Vijayeswara Swamy temple at Kanaka Durga Nagar. The Minister admitted that the manner in which the historic Seethammavari Padalu, Saneeswara Swamy and Dakshina Mukha Anjaneya Swamy and two other temples in close proximity were razed to the ground. The matter had hurt the sentiments of millions of Hindus.

“It is unfortunate that the government is doing injustice to the Hindus and hurting their sentiments in the name of secularism,” he said.

“The government should issue an order regarding the construction of the demolished temples by August 15 or else we will organise a Maha dharna on August 18,” said VHP city vice-president Durga Prasad Raju.

Earlier, AP Agriculture Minister Prathipati Pulla Rao said the intention behind demolishing the temples was to widen roads for the pushkaram but there was apparently negligence on the part of officials. Chief Minister N. Chandrababu Naidu has since ordered that the demolished temples should be restored and better structures built at the same places in deference to wishes of people.

In a press statement, the Andhra Pradesh VHP declared that awareness campaign would be run nationwide to hold 10 lakhs Hindu’s indefinite ‘Dharna’ in Andhra capital if the Govt would not take proper action within three months.