Being the country of great Hindus, Hindusthan accommodates all and doesn’t exclude anyone. 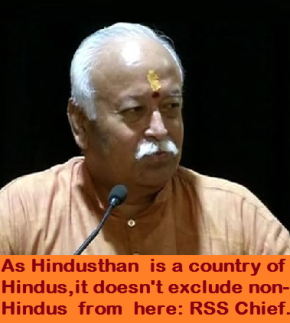 PTI | Indore | Oct 28, 2017:: Hindusthan is a country of Hindus, but it does not mean that it does not belong to others, according to Rashtriya Swayamsevak Sangh chief Mohan Bhagwat.

Addressing a gathering of college-going RSS volunteers in Indore on Friday, he said the government alone cannot bring development, and that it needed changes in society.

“The term ‘Hindu’ covers all those who are the sons of Bharat Mata [Mother India], descendants of Indian ancestors and who live in accordance with the Indian culture.” No one leader or party can make the country great but it needs a change and we will have to prepare society for it, he said.

“In ancient times, people used to look to god for development, but in Kaliyuga people look to the government… But the fact is, the government can go only as far as society goes,” he said.

To make India powerful, prosperous and a “vishwa guru” (world teacher), the countrymen will have to rid their hearts of the thought of “discrimination on any grounds”, he added.