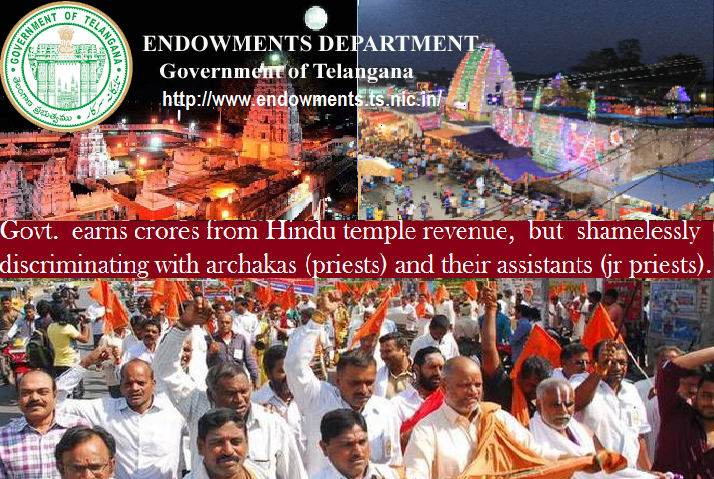 Priests, staff of Hindu temples in Telangana to get ‘increased’ honorarium through treasury like govt employees from Dec 1. But, Govt has no planning to felicitate the Hindu priests with salary demands.

B Upendran | HENB | Hyderabad | Nov 10, 2017:: Priests and staff working in Hindu temples across the state of Telengana will get their honorarium and the cost of monthly ritual of temples  through the treasuries department just as government employees do, from December 1.

Replying to questions raised by members in the Legislative Assembly during Question Hour on Friday, Endowments minister A. Indrakaran Reddy said the  government had also increased honorarium (remuneration?) and monthly temple rituals for priests from Rs 2,500 to Rs 6,000 per month under Dhoopa Deepa Naivedyam scheme .

The government has identified 4,805 temples to which it will extend financial assistance. Chief Minister K Chandrasekhar Rao has given the highest priority to development of temples and welfare of priests, the minister said, and paying honorarium etc. through the treasuries department is a major milestone that no government in the country has achieved so far.

He said the practice of paying the honorarium of priests and staff by temple committees was irregular and often delayed, so now they will receive their claims in their bank accounts on the first of every month from the government.

The government will also enhance financial assistance to temples that have no income sources under the Dhoopa Deepa Naivedyam scheme, the minister said.

“Previous governments extended just Rs 2,500 to each temple per month, of which Rs 1,000 was given for the scheme and Rs 1,500 as honorarium of the priest. The TRS government has increased this to Rs 6,000, of which Rs 2,000 is for performing daily rituals to gods and Rs 4,000 towards honorarium of the priest. We have allocated Rs 34.60 crore for the scheme,” Mr Reddy announced.

The government has given Rs 10 lakh for construction of temples in dalit colonies without seeking any contribution from residents or others, Mr Reddy said.

Many of the Archaka (temple priests) organisations including State Archaka Samakhya in Telengana are now in a demand of the of the implementation of 1996 judgment where Supreme Court directed the Govt to to  pay salaries to the archakas and their assistants.

It is seen that the salaries from temple revenue were drawn right from Commissioner to junior level employees but archakas providing key services in the temple were neglected, they said. A clerk in a small temple was drawing Rs.25,000 a month while the honorarium/remuneration of archakas ranged between Rs.1,500 and Rs. 4,000 in irregular basis, they said. But, the temples are giving huge revenue collections to the state on regular basis.

Archaka Organisations in Telengana are planning to go in bigger protest for Govt’s cheating of Temple funds and overall injustice to Hindu priests.

One comment on “Very little increase in Dhoopa Deepa Naivedyam scheme and Archaka Honorarium in Telengana. Govt is cheating with Hindu Temples.”