‘…I and my team of ‘gau rakshaks’ will hit the streets and stop slaughter of cows in the state,’ T Raja Singh Lodh said. (Photo: Screengrab | Facebook | @RajaSinghOffical)

T Raja Singh Lodh, who represents Goshamahal constituency in the assembly,  alleged that his party was not providing any support for ‘gau raksha’ (cow protection).

In a video message posted on a social networking site he said that he has forwarded his resignation letter to Telangana BJP president K Laxman.

“For me Hindu dharma and cow protection are priorities, and politics comes later. For ‘gau raksha’, I have resigned from the BJP. I brought up the issue in the Assembly many times, but the party did not provide any support,” he said.

“…I and my team of ‘gau rakshaks’ will hit the streets and stop slaughter of cows in the state,” he added.

In the video message T Raja Singh Lodh said he and his team is ready to stop cow slaughter during Eid al-Adha in Telangana.

He claimed that about 3,000 cows are going to be slaughtered for Bakr Id or Eid al-Adha next week. 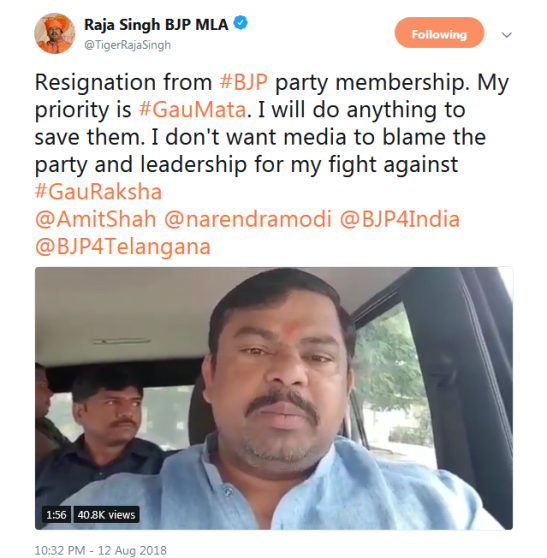 [To hear the Raja Singh Thakur’s speech on his resignation plz click here+].

He also attacked Telangana Chief Minister K Chandrasekhar Rao and said he is aware of cow slaughter but is not acting upon it.

T Raja Singh Lodh said he did not want to put the Bharatiya Janata Party (BJP) in any trouble, so decided to resign from it.

Raja Singh addresses a press conference after submitted his resignation on Sunday.

We can take lives to save cows, says BJP MLA Raja Singh

Deccan Chronicle | Hyderabad | Aug 12, 2018:: Bhartiya Janata Party legislator from Goshamahal, T. Raja Singh warned of “mob lynching” if Telangana police failed to stop the slaughter and sale of cows and healthy bulls during Bakrid.  “Our volunteers will go the spots where the cows and bulls are being slaughtered illegally. There can be a confrontation between the butchers and our volunteers. We have prepared 1,000 volunteers to check on the illegal transport of cattle,” he told reporters on Sunday.

The BJP MLA said that there were several thousands of people who are ready to face arrest for the cause of “gau raksha”.  “We can sacrifice our lives and at the same time, take lives too. We will not step back when it comes to the protection of cow, come what may,” he said.  Mr Raja Singh further said that there is an atmosphere of mob lynching in the country and if the police fail to check the transport of cattle into the state it can happen here too.

“To avoid such situation, the police should check the sale of cows and healthy bulls. The government departments are accepting bribes and issuing certificates saying the animals are not fit for agriculture or any other purpose. The corruption needs to checked,” he said.  The legislator said, “Earlier the government used to set up check-posts a month prior to the Bakrid but no such measures are being initiated now.” 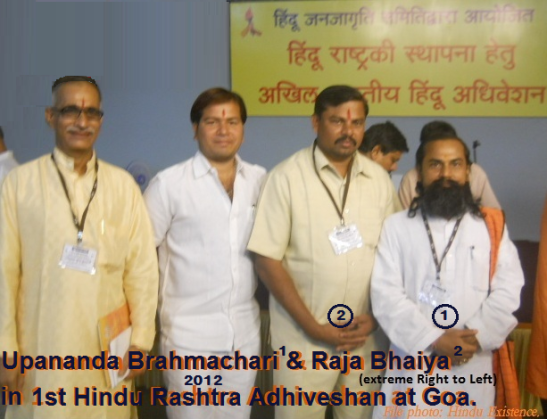 Hindu Existence Post Script:: Hindus are proud of devout Hindu leader T Raja Singh Lodh, who has sacrificed his political ‘career’ so that he can struggle for Hindutva and Save Cow Movement ! Such Hindus are the real strength of Hindu Dharma ! How many Hindu lawmakers are ready to do such sacrifice for Hindutva ?

As the blessings of Gau Mata and Bharat Mata are always Raja Singh, nobody can touch him to stop his Mission for Save Gau Mata. But, BJP must keep in mind that their Vote Bank Politics will ruin the party if such devout Hindus start to resign from politics.

This is an embarrassing story inside the BJP that Devout Hindu Leaders are not feeling free to place their demands for Hindutva causes and they are leaving the party in a very odd situation. These signs in BJP are not good!! Jai Shri Ram. Vande Gau Mataram. ~~ Upananda Brahmachari.