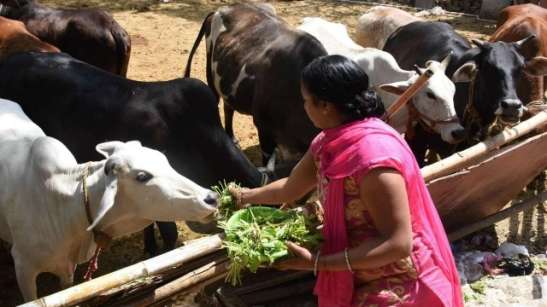 Satyendra Tripathi | HENB | Dehradun |  Sep 20, 2018:: For the great cause of protection of Cow progeny, the BJP and Congress both finally came to an unity in Uttarakhand. The Uttarakhand Assembly passed a resolution on Wednesday, seeking the status of “rashtra mata” (mother of the nation) to the cow.

Earlier the Uttarakhand High Court declares itself legal guardian (parens patriae) of cows+ to ensure prevention of cow-slaughtering in the state. Then the Court declared its verdict that  it is the responsibility of the state under Article 48A of Indian Constitution to protect cow progeny to  improve the environment and safeguarding of forests and wildlife of the country.

The recent resolution passed in Uttarakhand Assembly will be sent to the Centre. It was moved by state Animal Husbandry Minister Rekha Arya and passed unanimously after it got the support of both the Opposition and treasury benches. Moving the resolution in the Assembly, Arya claimed that the cow was the “only animal that not only inhales oxygen, but also exhales it”, and spoke at length about the “medicinal qualities” of cow urine.

“The cow is treated as an incarnation of motherhood. The cow’s milk is scientifically considered the best for newborn after his mother’s milk,” the minister said. Giving the status of “rashtra mata” to the cow will further strengthen cow-conservation efforts all over the country, she added.

Indira Hridayesh, leader of the opposition from Congress said that giving this status to the cow is good. However we hear of cows dying in shelters across the country due to lack of care and facilities. The Congress has no problem with the resolution, but more needs to be done on the ground to truly respect the cow.

Upananda Brahmachari, eminent Hindu interlocutor conveyed his warm greetings to the Chief Minister, Animal Husbandry Minister of Uttarakhand, Leader of Opposition and Speaker of Uttarakhand Assembly for taking such great decision for the protection of Cows and Nation in a critical time when the existence of Indian progeny of Cows (Bos Indicus) facing a dangerous crisis.
…