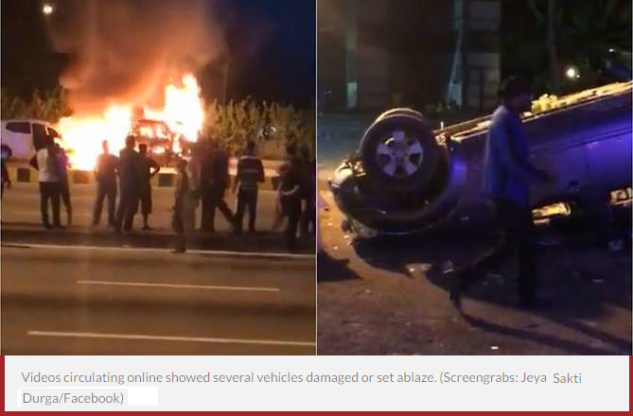 Violence breaks out near Hindu temple in Malaysia after insult by Muslims, vehicles set ablaze at random.

The fight between two groups was sparked by a disagreement over the relocation of the Hindu temple, Subang Jaya district police said in a Facebook post.

Hindu devotees were reportedly protesting the relocation of the 100-year-old Hindu house of worship when they were attacked by another group of Muslim people, news portal Malaysiakini said.

“Eighteen cars and two motorcycles were torched in the incident. A police patrol car was also damaged by stones thrown during the incident,” said Selangor police chief Mazlan Mansor.

“About 50 men were in the compound of the temple and a group of men was outside. They traded insults that led to the riot,” he added.

In a Malaysiakini video, it is clearly seen that Jihadi people came out in streets with Allha-o-Akbar slogans to chase the Hindus to stranded them from their demand to save the dignity of the 100 years old Sri Maha Mariamman temple in the seafield area of Selangor’s Subang Jaya. The Allaho-ho-Akbar people were telling not to make trouble in their speech, but they were set to create violence against Hindu people connected with Sri Maha Mariamman temple

Minister in the Prime Minister’s Department Senator P. Waytha Moorthy has appealed to all Malaysians to stay calm over the scuffle at a Hindu temple in USJ25 early today within the jurisdiction of UEP (United Estate Projects) Subang Jaya.

“The minister has raised grave concern of the community on the affray which appears to be a threat to the breach of peace and peaceful co-existence of our multi-racial and multi-religious society as well as freedom of religion,“ said a statement issued by the Office of the Minister in the Prime Minister’s Department.

The statement said the Deputy IGP has promised that a thorough investigation would be conducted on the incident.

In SHAH ALAM, Selangor Mentri (Minister) Besar Amirudin Shari said the matter should be left to the police to investigate as it involved a crime, AMAR SHAH MOHSEN reports.

“It is best that we give our full trust to the police to investigate the motive behind the attack and what actually transpired.

“This involves crime and as such, I advise that everyone refrain from making statements, or take actions, that can lead to unwanted scenarios,“ he told reporters at the lobby of the Selangor state legislative assembly, here, today.

In GEORGE TOWN, Penang Deputy Chief Minister II Dr P. Ramasamy called on the local authorities and developers throughout the country to find ways to ensure that their development projects can co-exist with Hindu temples, IAN MCINTYRE reports.

Ramasamy, who is DAP central executive committee member, said that there needs to be a better way to settle disputes over the locations for places of worship, especially if the place of worship was established earlier than the proposed development project, he said in an interview.

Ramasamy, who plans to visit the site of the unrest, said the Pakatan Harapan government needs to make it a point to ensure that the co-existence of places of worship with new projects becomes a working policy.

“I am aghast over the incident, especially coming under the Pakatan tenure. We need to offer a solution to all parties,“ he said.

Meanwhile, the Malaysian Hindu Sangam (MHS) called upon the Hindu community to remain calm and not to retaliate with violence.

“The MCCBCHST calls upon the police to leave no stones unturned in bringing to justice all those who were involved in this ugly incident.

“Such acts of violence must never be condoned. A temple is a house of worship and its sanctity must be maintained at all times.”

A source in MCCBCHST says,the Indian Jihadi Preacher Zakir Naik,  now in Malaysia, is radicalizing the Malay Muslims youth against the Hindus residing there. Zakir Naik has established an internal connection with many Muslim Ministers, Politicians, Administrators and Police Officials in Malaysia, who treat Hindu Citizens of Malaysia as second class citizens.

‘Pray for him’: Fiancee of fireman injured in Malaysia Hindu temple clash

Criminals behind riot at Malaysia Hindu temple will be punished severely: PM Mahathir

One comment on “After Islamic insult on Hindu temple in Malaysia, Violence breaks out, Vehicles set ablaze.”