Hindu Girls and Women are not safe in Kolkata for these Quran followers: Three Muslims held for sexually harassing a Hindu woman in moving bus. Police averted a Nirbhaya Repetition promptly. 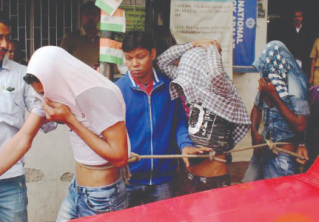 Three Muslim youths arrested for molesting Hindu woman in running bus in a motive to rape her. (Pic. Millennium Post)

The incident happened at around 10pm on Saturday, when police heard a woman’s cry for help and stopped a private bus passing through the EM Bypass in the Pragati Maidan Police Station limits, a Kolkata Police official said.

Police found that a group of men were having an altercation with a woman who was screaming for help, the police official said.

“They were hurling verbal abuses and were making lewd comments aimed at the woman while she was screaming for help. She was travelling from Malancha to Howrah.

These men started making lewd gestures and comments after the bus reached Ghatakpur when passengers were few. When the bus driver and the conductor did not react, the woman started protesting,” he said.

Initial investigations revealed that the accused trio Sheikh Pervez, Sheikh Mujibar and Sheikh Aftab work for a leather processing plant in Ghatakpur area and travel in a bus of the same route almost everyday.

“The victim also takes the bus quite frequently and these men had been targeting her for quite sometime. Last night, they were asking for the woman’s phone number and trying to befriend her,” the officer said.

The trio tried to flee but the police nabbed them and finally arrested them on the basis of a complaint lodged by the victim, he said.

From reliable reports it is known that eighty percent of Hindu girls and women workers in various tannery and leather cutting and stitching or related industries are gross victims of the Muslim hooligans and Muslim owners, managers, lobour contractors and co-worker male Muslim gangs in order to get daily job under the Islamic control.

This Islamic calculation for Hindu girls and women are found in the broad day light in entire Kolkata and its suburbs stretched in South & North South 24 Parganas, Howrah and Nadia.

The Hindu residents of Kolkata fear to send their girls and women in Rajabazar, Metiaburz. Khiderpur, Tiljala, Park Circus areas. But, the poor and needy Hindu girls and women come from far areas of adjacent districts and suburbs to earn their livelihood and fall in the trap of a jimmi (living in an Islamic control) world in disguise.

Kolkata port, Rajabazar, Park Circus, Metiaburz, Khiderpur, Tiljala police station records show that the majority criminal are Quran follower and devout Namazis and they control the Kolkata underworld. This underworld controls almost everything, politics to prostitutes, parking of cars to the booty of bars…. including the labour contractors.

Most of the organised crimes inside or outside the city are under the control of these sons of ‘Religion of Peace’. So, there was no surprise to see their great presence in the attack on American Center, or abduction of Khadim’s owner, bomb blast behind the state police HQ, Murder of DCP Vinod Meheta, Anita Dewan Rape and Murder, Suzette Jordan Rape in Park Street and in the long list.

Thanks God, the sexually assaulted female worker raised an alarm against the three Muslims in the moving bus on Saturday near Pragati Maidan PS area that helped the police to nab the three culprits in time. Otherwise, Kolkata newsline would get another Nirbhya (Jyoti Singh Pandey), who was brutally raped and murdered in a moving bus in Delhi on 16 December 2012.

Please contribute/donate here something to our cause to expose anti-Hindu Islam in India and abroad.