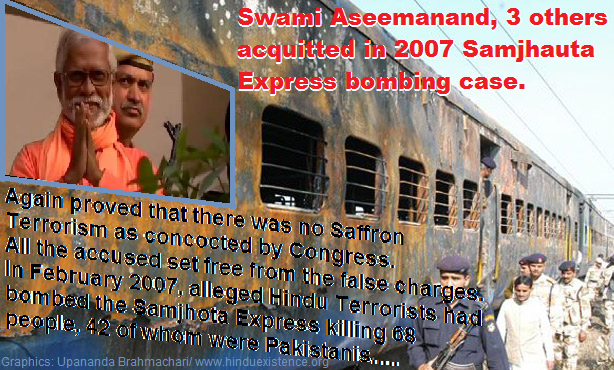 Again proved that there was no Saffron or Hindu Terrorism as concocted by Congress. Accused set free from false charges.

Upendra Bharti | HENB | New Delhi | March 20, 2019:: After a long 12 years of Judiciary and custodial trail, finally a Panchkula special NIA (National Investigation Agency) court on Wednesday acquitted four people including Swami Aseemanand for the deadly blasts of the Samjhauta Express in 2007. 68 people – 42 of them Pakistani passengers – were killed in the attack when the bi-weekly train, connecting Delhi and Attari at India-Pakistan border in Punjab, on the night of 18 February 2007.

Hence, once again it is reiterated that there was no Saffron or Hindu Terrorism as concocted by Congress.as all the presented accused in the instant case are now set free from the false charges.

Aseemanand, Lokesh Sharma, Kamal Chauhan and Rajinder Chaudhary have been acquitted by the court,” NIA counsel Rajan Malhotra said, adding that the agency planned to challenge the verdict.

After its probe, the NIA filed a chargesheet in June 2011, indicting eight people for their alleged roles in the terror attack.

Of the eight, Swami Aseemanand, Lokesh Sharma, Kamal Chauhan and Rajinder Chaudhary appeared before the court and faced trial.

Sunil Joshi, the alleged mastermind of the attack, was shot dead near his home in Madhya Pradesh’s Dewas district in December 2007.

The three other accused – Ramchandra Kalsangra, Sandeep Dange and Amit – could not be arrested and were declared “proclaimed offenders”.

Investigators had concluded that terrorists had used improved explosive devices and inflammable substances for the blasts and the fire in two coaches of the train near Panipat in Haryana. Two unexploded suitcase bombs were found in other compartments of the train.

The Samjhauta blast case was the only pending case against the 67-year-old Rastriya Swaymsevak Sangah preacher who had once been accused by the federal anti-terror probe agency, National Investigation Agency, of conspiracy in 2007 bombings at Hyderabad’s Mecca Masjid and Rajasthan’s Ajmer Dargah.

Swami Aseemanand has already been cleared by courts of terror charges in these cases over the last two years.

Many of Hindutva Organisations had alleged that Swami Aseemanand, Sadhvi Pragya and others had falsely been implicated in the “saffron terror” cases to create a fake balance with jihadi terrorism as part of the “minority appeasement” politics of Congress.

From a source it is intercepted that Swami Aseemananda may join in politics and he may contest from any of Lok Sabha seats in WB in 2019 election in BJP ticket.

__inputs from PTI and Agencies.

One comment on “Swami Aseemanand, 3 others acquitted in 2007 Samjhauta Express blast case.”