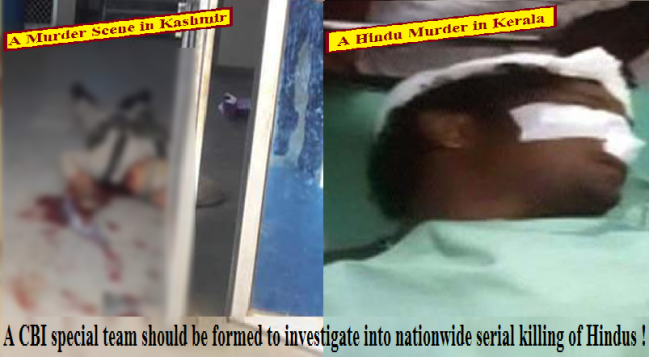 A CBI special team should be formed to investigate into nationwide serial killing of Hindus: HJS.

Ramesh Deshmukh | HENB | Mumbai | April 12, 2019:: The serial killings of Hindu leaders and activists by anti-Hindu Jihadi, Naxal and Christian terror groups in India has created a sensation in the mind of majority people of India, obviously. Recent killings of  Rashtriya Swayamsevak Sangh (RSS) leader Chandrakant Sharma (52) and his personal security officer in Jammu by Jihadi terror group, and the murder of BJP MLA Bhima Mandavi (47) in Chhatisgarh by naxal militants hit the headlines of newspapers. Even in the past, Hindus have been systematically identified and killed in states like Kerala, Tamil Nadu, Karnataka, J&K, Andhra Pradesh, West Bengal, Punjab and Madhya Pradesh that are ruled by Congress, Communists, Trinamool and sometimes by BJP also. Whenever Hindus are murdered, from the experience till now, the Congress and Left-leaning administration shies away from conducting an impartial and thorough investigation into the murders. This has only instilled more confidence in Jihadi organisations such as the Popular Front and other radical ultra leftist organisations, that has led to the on-going serial murders. The terrorised Hindus in these states are living in constant fear. It is clearly evident that the nationwide killings of Hindu leaders, is a part of an extensive well-planned conspiracy. Therefore, the Centre should look into the matter and uncover the ‘mastermind’ behind the nationwide murders of Hindus, and establish a special task force of CBI to severely punish all those involved, Hindu Janajagruti Samiti has demanded.

Usually, the fraternity of Congressmen, leftists, liberals, writers, progressive thinkers, and film personalities that give sermons on secularism and equality, express outrage for years on at the murders of liberals. But why have these people not uttered a word despite the high number of the murders of Hindus? With this question, the Samiti highlighted the hypocrisy of these liberals.

In a public meeting in Kerala, communist leader K. Mani had openly admitted to have ‘killed 250 Hindus to gain power’. In Madhya Pradesh too, within four days of Congress coming to power, four Hindus have been murdered. Even now, in the Congress-led Chhatisgarh, the BJP MLA was murdered straightaway. This situation is gruesome to say the least and the moment anti-Hindu forces come to power, attempts are made to settle scores with Hindu leaders. Therefore, one cannot expect justice from these state governments. Thus, the Central government should provide security to all Hindu leaders, saints and nationalists that have a threat to their life from these volatile states, in addition to transferring the legal cases of the murders of all Hindus to other states for an impartial investigation under the supervision of the court, the Samiti has requested.