Some agenda is out there to terrorise Hindu community in Sindh, Pakistan….

Virjivardhan Kholi | HENB | Larkana | Sept 18, 2019:: The wailing family of Nimrita Amarta Maher Chandani (short name Nimrita Kumar), a final-year student of Bibi Aseefa Dental College (BADC) Larkana who was mysteriously found dead in a room of the Chandka Medical College Hostel (CMCH) in Larkana on Monday, has demanded a “transparent investigation” into her death while rejecting reports that the Hindu student had committed suicide.

Speaking to the media on Tuesday, Nimrita’s brother Dr Vishal, a medical consultant in Dow Medical College in Karachi, said that his sister did not commit suicide but was in fact, a victim of cold-blooded murder.

He said that the marks around her neck were not similar to those inflicted by suicide from hanging as claimed by the police but that such marks were etched in the skin with cable wires whereas there were also wounds on her arms which were suggestive of someone holding her down forcefully.

The deceased student’s family also pointed out the unprofessional and dubious way the police and doctors carried out their duty.

Nimrita’s uncle revealed that her body was kept in a hospital’s CMC’s intensive care unit before the family reached the hospital and demanded they be provided with an answer why the step was taken, adding that doctors were complicit in the “murder”.

A similar incident took place in January 2017 when a student a student of Sindh University, Naila Rind, was found hanging from the ceiling fan in her hostel room.

“Nimrita Kumari looks a very happy person and I see very much life in her. This is a murder, no doubt about it. Some agend is out there to terrorise Hindu community in Sindh,” one Ali said on Twitter.

Soon after the deceased student was found in her room, her mobile phone and other belongings along with other evidence were taken into custody by police for forensic analysis; however, the actual cause of her death has yet to be ascertained.

Further, a first information report (FIR) of the incident is yet to be registered whereas the deceased’s family said they will lodge a formal complaint once they receive a post-mortem examination report.

The police have yet to issue a statement.

PPP leader Nisar Khuhro, while speaking to media regarding the case, claimed that the post-mortem would give a clear answer as to what had happened while adding that police were investigating the case “from all angles” and can be trusted with taking action if any foul play was revealed.

She was laid to rest in her hometown in Ghotki on Tuesday. The Hindu community in Mirpur Mathelo shut down their businesses and shops in order to mourn her death and register their protest.

The incident comes right after the recent Ghotki vandalism of Hindu temples which was triggered because of a Muslim father-son duo who claimed that a Hindu man had committed blasphemy.

An unruly mob ransacked “three temples, a school and multiple houses belonging to the Hindu community” after the man, a principal in a school, was accused of blasphemy by his 15-year-old student Muhammad Ibtisam and his father Abdul Aziz Rajput. 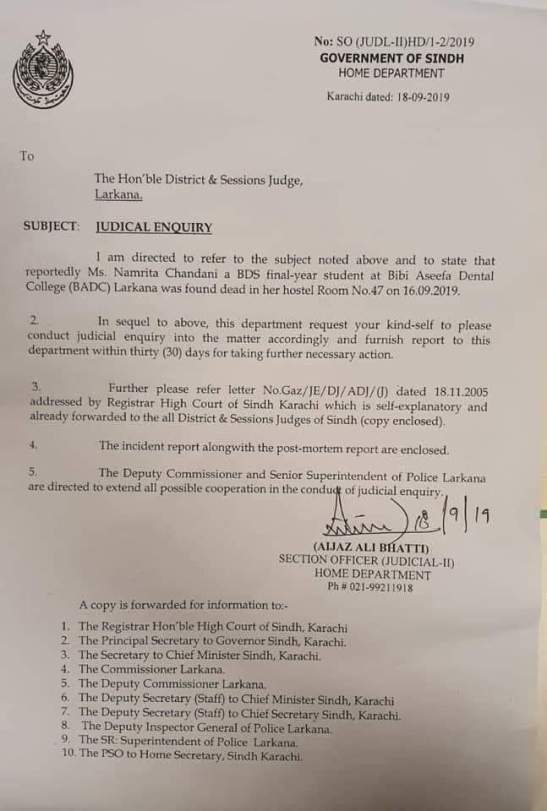 However, The Sindh Govt initiated a judicial probe on the mysterious death of  Nimrita Amarta Maher Chandani Kumari to reveal the truth of the most unfortunate and untimely death of a promising girl student in BDS discipline.