Minor Dalit Girl Gang Raped by 3 Rape Jihadis in UP, Where is the Clamorous & Glamorous Celebs? 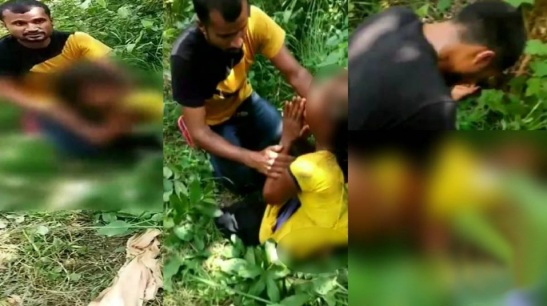 Screengrab of video shot by rapists in which the minor Dalit girl can be seen pleading not to rape….. (Source: BreakingTube.com)

“Brothers you know me, please leave me for your Allah’s sake,” minor Dalit girl begged for mercy as three Muslim men raped and filmed her.

All Three of Hindu Teen’s Gang-Rapists Named after ‘Mohammed’… So, the Pig Presstitutes and Bull Shit Intellectuals keep mum. Think the situation of these selective secular people if three Hindus raped a Muslim teen and filmed anyway that in Yogi’s Uttar Pradesh!

Sherni Khushi Singh | HENB | Kaushambi | Sept 23, 2019:: A 16-year-old Hindu Dalit girl was gang-raped by 3 Muslims in UP’s Kaushambi district on Saturday. Villagers in Sarai Aquil area caught hold of one of the accused while the other two managed to flee. Later angry villagers surrounded the police station of the area, alleging police misbehavior with the girl’s family.

All Three of Hindu Teen’s Gang-Rapists Named after ‘Mohammed’, The Rape Jihadis are identified as Mohammed Nazim, Mohammed Chotka & Mohammed Badka  So, the Piggy Presstitutes and B-Shit Intellectuals keep their lips tight, eyes closed and ears shut. Think the situation of these selective secular people if three Hindus raped a Muslim teen and filmed in the same way the Mohammedan perpetrators did that in Yogi’s Uttar Pradesh!

The girl had gone to cut grass near the Eidgah (open-air gathering place used for Muslim festival of Eid) of a neighboring village, when the 3 Muslim men abducted her and took her to an isolated spot where they raped her one by one. They also shot a video of the incident and uploaded it on social media. After raping her, the accused also threatened to kill the girl.

As per news site breakingtube.com, the girl can be seen pleading with the men in the extremely disturbing video. She is heard calling them “bhaiya” (brother) and saying, “You know me. Please leave me for your Allah’s sake.” But her pleas went futile on her rapists.

The victim girl narrated her ordeal to the NYOOOZ – UP & UK where, where she told, “I had gone to an orchard for cutting grass. They attacked, gagged and grounded me as well. They did horrible things to me before I managed to leave that place.”

The accused have been identified as two brothers – Mohammed Chotka & Mohammed Badka – and  Mohammed Nazim. Upon hearing the girl’s screams, villagers reached the spot and managed to catch Nazim, while the two brothers managed to flee. After beating him up, villagers handed Nazim over to police.

It is alleged that when the father of the victim went to the police station to lodge a complaint, he was mistreated by police. An inquiry has been initiated against ASI Deepak Gupta and a head constable for mis-behaving with the victim’s family, and they have been ordered to report to police lines pending inquiry. A separate inquiry has also been ordered against SHO Manish Pande  in connection with the incident. 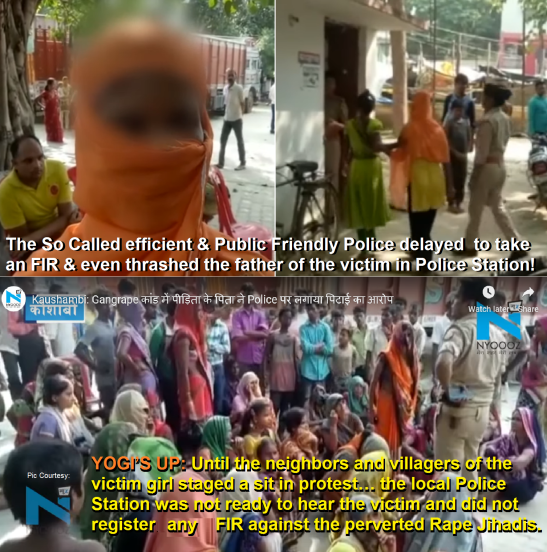 Reports tell us that until the neighbors and villagers of the victim girl staged a sit in protest… the local Police Station was not ready to hear the victim and did not register any FIR against the perverted Rape Jihadis. This is the sorry situation of UP Police, CM Yogi may not know.

Five teams have been constituted for the early arrest of the accused, the police said. DIG Range KP Singh and ADG Prayagraj Sujeet Pandey visited the village on Sunday and met the family of the victim. Police announced a reward of Rs 25,000 has been announced on them. The victim has been given a compensation of Rs 4 lakh.

According to Kaushambi’s superintendent of police, Pradeep Gupta, a first information report (FIR) (314/2019) has been filed under sections 76 (rape), 376 D (rape by one or more persons), 354 (assault or criminal force to outrage modesty of a woman), 506 (criminal intimidation), 286 (negligent conduct with respect to explosive substance), sections 3 and 4 of Protection of children from sexual offences or POCSO Act, section of Criminal Law Amendment Act, and various sections of SC/ST Act, against the three accused.

Taking its twitter handle, Kaushambi Police ascertained that the ADG Prayagraj (Zone Allahabad) Police assured ‘as soon as possible’ arrest of the absconders in the case and the conviction of all the culprits through Fast Track Court. He also urged not to spread the viral rape clip’ of the Dalit Girl as uploaded by the the Mohammedan Rape Jihadis. The men spreading the most disturbing video will be charged by the police as ADG’s message contained.

It is also reported that the National SC/ST Commission has also taken sou-motto cognizance of the case and sought urgent report on the matter from the Govt of Uttar Pradesh.

__Agencies. Courtesy to all pic. link, video sources used above.

One comment on “Minor Dalit Girl Gang Raped by 3 Rape Jihadis in UP, Where is the Clamorous & Glamorous Celebs?”