SC referred review pleas on disputed “all women’s entry into Sabarimala” to a larger bench.

Upananda Brahmachari | Delhi | HENB | Nov 14, 2019:: The Supreme Court on Thursday referred to a larger 7-judge constitution bench a clutch of review petitions challenging its September 2018 verdict allowing entry of women of all age groups into the Sabarimala shrine in Kerala.

In a divided 3:2 majority verdict, the CJI Ranjan Gogoi-led bench observed that restrictions on women in religious places were not limited to Sabarimala shrine alone and that were prevalent in other religions too.

Pronouncing the majority view, CJI Ranjan Gogoi, Justices A M Khanwilkar and Indu Malhotra said the issue raises serious questions and social commotions about faith and practices of a religious denomination or sect.

However, the minority verdict by Justices R F Nariman and D Y Chandrachud gave a dissenting view by dismissing all the review pleas and directing compliance of its September 28, 2018, decision. 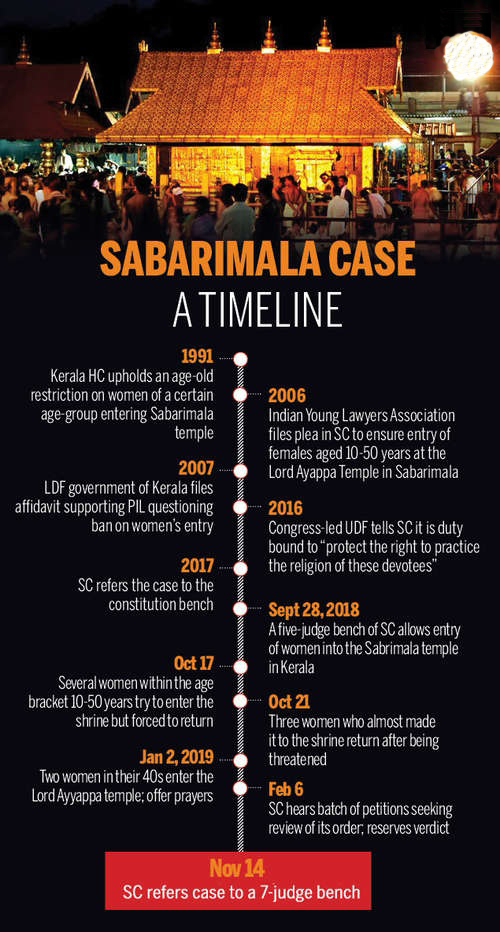 As per Sabarimala faith and tradition, the menstruating age (10-50yrs) group women are not allowed to enter into Ayyappa Swami temple in Sabarimala Shrine hills, but there is no restriction for the girls below 10 yrs and the women above 50 yrs to enter into Sabarimala temple.

The Supreme verdict on Sabarimala review petitions just ahead of the pilgrimage season at the Lord Ayyappa shrine commencing on November 17, the focus has now shifted to the LDF government in Kerala over allowing women in the 10-50 age group to offer prayers as the SC has decided to keep pending the pleas seeking review of its verdict.

The Thantri Kandaru Rajeevaru, chief priest of Sabarimala also expressed his hopeful views by saying, “I honour and respect the verdict. This verdict will strengthen the belief of devotees.”

Interestingly, the apex court has also said that the issue of Muslim women’s entry to mosques, cases on female genital mutilation in the Dawoodi Bohra community and access to fire temples or ‘towers of silence’ for Parsi women who marry outside the community will all be clubbed along with the Sabarimala matter and be heard by the larger bench.

The issue of entry of all ages women into Sabarimala Temple promoted and patronized by some non-faithful on Lord Ayyappa and non-believers in Hindu tradition and supported by Indian judiciary in its highest seat created a mammoth and worldwide agitation and social clamor to protect the Sabarimala faith and Tradition.

Sensing that serious social agitation by the faithful Ayyapans and common Hindus, the LDF Govt must not be crazy to send again some urban Naxals and so called social reformers to Sabarimala to degenerate Hindu faith and sentiment.

As the review petitions on SC order for Sabarimala entry issues are pending before a to be constituted larger bench, the age old Sabarimala entry restrictions on women must be restored by the LDF Govt.

The Hindu organizations in Kerala are ready to fight+ as before to protect Sabarimala faith and Tradition. Supreme Court actually  refreshed the resurgent Hindu sentiments to protect Sanatan Dharma.