Govt must probe Islamic funding for Delhi Riots and the role of foreign media houses.

Foreign media’s coverage on Delhi violence is an attempt to tarnish Secular image of India denouncing the Hindus!

The Narendra Modi led Union Govt must probe the foreign funding to the Islamic rioters and the suspicious role of foreign media houses to show their allegiance to the provocative pro-Pakistani rioters in Delhi.

Upendra Bharti | HENB | New Delhi | Feb 29, 2020:: Foreign media’s coverage on Delhi Riots in New York Times, BBC, Washington Post, Time, The Wall Street Journal…. all are finally exposed as an attempt to show Hindus as attackers and Muslims as victims. These Media houses also scathingly attacked  Prime Minister Modi and Home Minister Amit Shah as the perpetrators of the riots without finding the truth of Delhi Riots started the night of 23 February 2020, till it ebbed on 25th February.

The violence in North East Delhi has claimed the lives of 42 people, left hundreds injured and destroyed many properties including houses, schools, shops, etc. Even as the city is limping back to normalcy, the Delhi Police has filed at least 123 FIRs and arrested or detained as many as 630 people so far.

The fact remains that in these riots both the Hindus and Muslims have lost their lives and properties, but a large part of the western media is giving the riots a colour of conspiracy against the Muslims. The foreign media doesn’t wasn’t to show the truth and is trying to report it as the violence on Muslims by Hindutva forces.

The established anti-India and anti-Modi US newspaper, The New York Times, in its headline wrote, “As New Delhi counts the dead, questions swirl about the police response.” They also wrote in their article, “Witnesses say, officers stood by when Hindu mobs attacked Muslims.”

Another infamous anti-Hindu US newspaper, The Washington Post reported on Delhi violence and wrote, “India’s hard-line Hindu nationalist watched anti-government protests centred in Muslim communities for months in anger that finally boiled over in the worst communal rioting in New Delhi in decades, leaving 38 People dead and the Indian capital shell shocked.”

During the riots, a mob was killing people like animals and IB staffer Ankit Sharma fell victim with 400 stabbing over 4 hours to one such mob. Many foreign media agencies have been reporting Sharma’s death in the wrong way. Head constable Ratan Lal of Delhi Police was a victim of fanatic mob with Arabic names who love to chant Allah hu Akbar in a twist of anti-CAA or anti-NRC rally. Actually, Delhi riots was not an reaction agaist CAA or NRC or Modi or BJP; it was just an exercise to unleash another direct action against Hindus to fulfill modality of Gajwa-e-Hind. Petro dollar fed Foreign media just ignored the truth of Delhi Riots to please their masters sitting in Arab. Without Islamic funding in an organized manner, the Delhi riots could not be happened in such a havoc scale.

Notorious US newspaper, The Wall Street Journal wrote in their report after a telephonic interview with Ankit’s brother that Ankit was killed by a mob who were chanting ‘Jai Shri Ram’. But these allegations have been denied by Ankit’s brother who claimed that his brother was killed after orders from former Aam Aadmi Party (AAP) councillor Tahir Hussain. The Delhi police have also filed a murder case against Hussain.

Inclining to the Muslims, BBC‘s Soutik Biswas  reports, “Armed Hindu mobs rioted with impunity as the police appeared to look the other way. Mosques and homes and shops of Muslims were attacked, sometimes allegedly with the police in tow. Journalists covering the violence were stopped by the Hindu rioters and asked about their religion. Videos and pictures emerged of the mob forcing wounded Muslim men to recite the national anthem, and mercilessly beating up a young Muslim man. Panicky Muslims began leaving mixed neighbourhoods”.

But, the BBC correspondent did not manage anything to cover the Islamic brutality on IB Staffer Anikt Sharma of Delhi Police Head Constable Ratan Lala by the fanatic Jihadi mob during the riots.

Going to the extreme the Time made a story by Rana Ayyub under the headline as. “Narendra Modi Sabctions Bloodshed in Delhi and India”…. which is nothing but a filthy effort to tarnish the image of Hindu majority Indian and her people with full of concoction and conjecture.

These explain that the foreign media is trying to divide India by presenting false news and reports on the Delhi violence. The reports of the Western media also prove that it wants to set their pro-Islamic agenda under the pretext of violence in India.

The Britishers had divided India on the basis of religion and implanted the two nation theory around 200 hundred years ago. The Muslim and Hindu in the country were fighting with each other because of the successful conspiracy of divide and rule policy of the Britishers. To date, the Indians are suffering from the divisions that were made decades ago in the name of religion. Britishers had left India in 1947 partitioning Undivided India in two nation, India and Pakistan. But, at present, the foreign media sitting miles away from India is still trying to divide the country to set another Pakistan again.

A large funding from US via Saudi is being apprehended to trend the reports of Delhi Riots in a very communal line. Senior Reporter of Daily Pioneer,  J Gopikrishnan exposed the matter as he was offered ‘US$1500 for 1000 words’ to write on Delhi Riots narrating. ‘how many died on Religion basis in connection with Trump’s visit’. 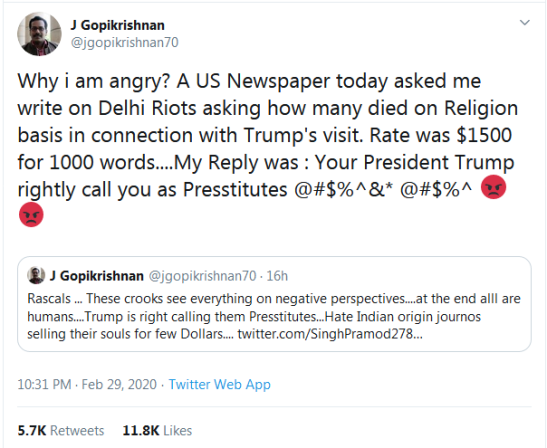 Even then, Modi Govt did not  issue any letter to the Delhi office chiefs of those partisan media houses to meet PMO’s Press Secretary for giving them some hard strictures!!!

In a tweet on Feb 28, Brahmachari wrote, “The Rustic dogs like UK & US based media houses viz. @guardian @guardiannews @nytimes @TIME etc support the Jihadi upsurge in India. They neglected how the fanatic Muslims orchestrated the #DelhiRiot2020 on the excuse of #CAAProtest. GOI must protest. Attn:  @DrSJaishankar @MEAIndia.”

In another tweet, Brahmachari emphasized, “Muzammil Khan who lost his brother in #DelhiRiot2020 has appealed to people to not get misled & maintain peace. Khan says, “My Hindu brothers stood by me in trying times.” WHY @guardiannews @nytimes @TIME IGNORE SUCH REPORTS? See: https://in.news.yahoo.com/hindu-brothers-stood-trying-times-says-muzammil-khan-172922156.html Attn: @DrSJaishankar @MEAIndia.“

The Narendra Modi led Union Govt must probe the foreign funding to the anti-CAA protestors & Islamic rioters and obviously, the suspicious role of foreign media houses to show their allegiance to the provocative pro-Pakistani people in Delhi.

__Some inputs taken from Zee News.

2 comments on “Govt must probe Islamic funding for Delhi Riots and the role of foreign media houses.”